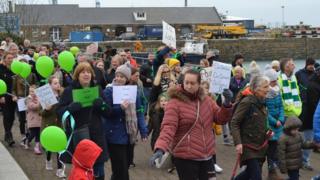 A call to halt Guernsey secondary education reforms so alternatives can be considered has been successful.

The requete calling on the Committee for Education, Sport and Culture to “pause and review” their one school, two sites model was lodged in January.

The committee had previously warned any delay to their reforms could cause up to five years of “uncertainty”.

The plans were due to move the island’s secondary education system from having four separate schools into a single school split across two sites for 11 to 18 year olds.

It also involved the end of the 11 plus selection process under the new non-selective system.

The requete, which was amended to include an exclusion of selection in the review of alternative models, was approved by 18 votes to 17 by States members after four days of debate.

In January, 263 teachers from across Guernsey’s secondary schools expressed their concerns with the “calamitous” reforms, with some backing the efforts to delay the plans.

There has also been vocal public opposition, after 2,500 people took part in a protest march and 150 people making their opposition heard outside the Royal Court building before the current meeting began on Wednesday.

A petition to support delaying the plans was signed by more than 5,500 people.