Home » World News » What is US row over postal service about? 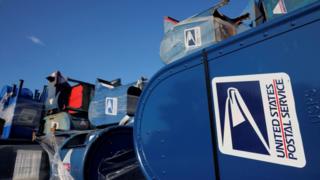 Slower mail delivery times in the US have raised concerns about how one of the oldest and most trusted institutions in the US – the Postal Service – can handle an unprecedented influx of mail-in ballots in November’s election.

This year fewer voters are expected to vote in-person amid the coronavirus pandemic, in which the US has seen the highest number of deaths and infections in the world.

That drop-off is expected to lead to an unprecedented influx of voters submitting their ballot by mail.

It’s up to states to determine how they arrange postal voting and there are mounting fears that some are not ready.

What are Democrats’ concerns?

A political appointee recently hired by President Donald Trump to run the US Postal Service (USPS) has been accused by top Democrats of implementing changes to how mail is processed in a deliberate effort to “sabotage the election”.

Republicans and Mr Trump counter that the new measures are needed to address the agency’s multi-million dollar budget shortfall. Mr Trump has said the price tag for emergency funds requested by Congress to shore up mail-in voting is too expensive and will lead to voter fraud.

Last week, he told Fox News he was blocking $25bn in the latest draft coronavirus relief bill in order to prevent the expansion of voting by mail.

Meanwhile, delivery times on everything from postcards to medicines have already slowed and Congress has recalled lawmakers to Washington to address the growing crisis.

Is there evidence of an intentional slowdown?

In May, Republican megadonor Louis DeJoy was tapped by the White House to be the first postmaster general in more than 20 years to not come from within the agency’s own ranks.

Seeking to address the $160bn (£122bn) budget shortfall at the USPS, in July Mr Dejoy implemented several new measures which have come under scrutiny.

US media report that more than 600 mail sorting machines are being decommissioned head of the presidential election this November.

This would represent around 10% of the service’s machines, but the Postal Service has said it “routinely moves equipment around its network as necessary to match changing mail and package volumes”.

The amount of mail has been down so far this year, but there are concerns the reduction in machines – which process millions of pieces of mail per hour – could limit the handling capacity of postal ballots in the build-up to the election.

Postal unions have confirmed some machines have already been removed, but President Trump’s chief of staff Mark Meadows says no more will be extracted from service ahead of the election.

The option of overtime for employees is also being restricted, and additional trips to ensure mail is delivered on time have been axed.

The Postal Service says this is to save costs and improve efficiency, but employees say the move has led to delays.

What are states doing?

Many polling stations in the US are often staffed by elderly volunteers who this year are expected to stay home due to their risk of falling ill from Covid-19.

Other elections held during the pandemic, such as a much-criticised primary race in Georgia, have seen a majority of polling places closed due to a lack of staff and long queues form at those that remain open.

Other states require voters to request a ballot be sent to them, while some Republican-controlled states such as Texas, Louisiana and Mississippi – but also Democrat-controlled New York – have said that a fear of catching coronavirus is not a good enough justification to vote by mail.

Late last month, the USPS wrote to states to inform them that their election laws might mean that some ballots are returned too late to be counted. Some states, such as Pennsylvania, are attempting to change laws so that ballots that arrive days after election day can still qualify.

Mr Trump has claimed that expanded mail-in voting would lead to the “the most corrupt election” in US history and even suggested delaying the election, which he does not have the power to do, to stop postal ballots leading to “inaccurate and fraudulent” results.

Critics say people could vote more than once via absentee ballots and then again in person.

But there is no evidence of widespread fraud, according to numerous nationwide and state-level studies over the years, apart from a few instances.

Unlike other government agencies, the USPS does not run on taxpayer money and instead relies on revenue from mail and packages, as well as other services.

However, mail volume has dropped by 30% since 2006, according to NBC News. It comes amid the rise of email and other computer-based messaging tools.

A May analysis by the US Government Accountability Office (GAO) found that $78bn had been lost in recent years due to the decline as well, as increased delivery costs.

A law passed in 2006 required the USPS to pre-fund the pensions for all employees going 75 years into the future, a move that experts say cost around $72bn and is not required by any other federal agency or private company.

Can they handle an influx?

Experts say the post office could easily absorb the expected influx of mail, even if every single eligible American were to vote by mail in November.

In the week before Christmas, the USPS typically delivers around 2.5bn letters, or about 500 million cards per day. And that’s not including packages.

According to a New York Times analysis, about 80m ballots might be sent through the mail this year – more than double than were sent in the 2016 election.

What do Americans think?

The Postal Service is one of the oldest and most trusted institutions in the US, with its history often given a prime place in school textbooks. The first postmaster general was chosen by the Second Continental Congress to be US Founding Father Benjamin Franklin in 1775. Franklin’s own postal career had began in 1737 when Great Britain chose him to be the postmaster of Philadelphia.

Absentee voting, which President Trump himself regularly uses, was born on the battlefields of the Civil War, according to National Geographic, with thousands of deployed soldiers sending their completed ballots in the mail back to their home states.

A survey in April by the Pew Research Center found that 91% of Americans have a favourable view of it, making it the country’s favourite government agency. For comparison, Americans give Congress about an 18% approval rating, according to a Gallup poll from July.

Several Democratic lawmakers have called for an investigation into the new changes that have caused delivery delays, and have asked Mr DeJoy to testify to Congress next Monday in an emergency hearing.

The grilling he is expected to received will be held on the first day of the Republican National Convention, setting the stage for a bitter partisan fight.

“The American people want their mail, medicines, and mail-in ballots delivered in a timely way, and they certainly do not want drastic changes and delays in the midst of a global pandemic just months before the election,” said House Oversight Committee Chairwoman Carolyn Maloney, as she announced Mr DeJoy’s decision to voluntarily testify.

The committee’s top Republican welcomed the news by attacking Democrats for pushing a “wild and baseless conspiracy theory about the United States Postal Service”.

Meanwhile, several state attorneys general have said they are considering suing the Trump administration to block the changes to the Postal Service.