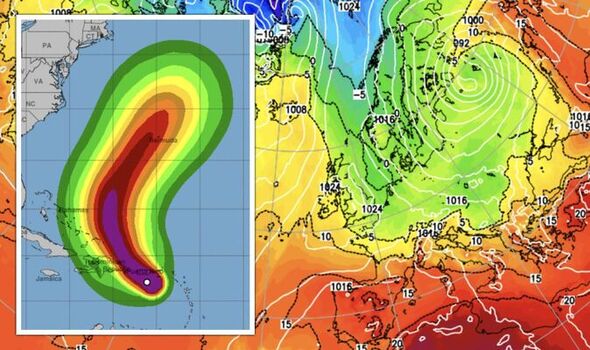 Weather through the rest of this month will be dominated by high pressure, halting Atlantic rain and driving dry blue skies. However, experts warn this ‘blocking’ ‘anticyclone’ will eventually weaken, opening the gates for storms to plough through Britain. 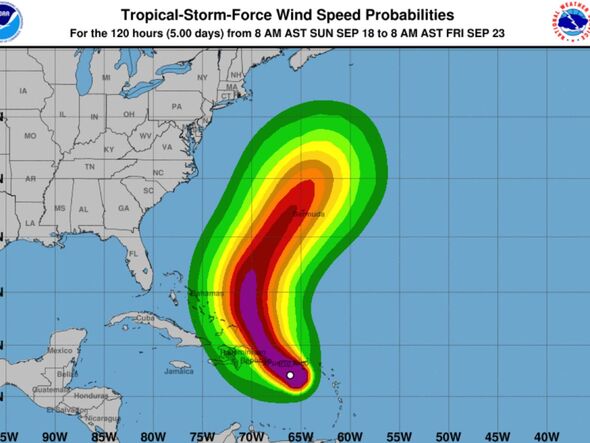 The Met Office predicts an unusually active Atlantic hurricane season; some of these can evolve into energy-charged storms and head to Britain.

Earlier this month, the US National Hurricane Centre announced the formation in the Atlantic basin of Hurricanes Danielle and Earl.

Both threatened to hit Britain as ex-tropical storms, but eventually withered in the Atlantic, although experts warn the next might not be far off.

Hurricane Fiona has in the past day wrought havoc across the Caribbean Island of Puerto Rico and appears to be heading on a similar eastward track.

Jim Dale, meteorologist for British Weather Services, said: “The storm season is one to watch, and I expect this to start picking up as we get into autumn, so we will be keeping an eye on the Atlantic and hurricane activity.

“After the very calm and dry weather we had during the summer, high pressure is bringing more settled weather through the second half of September in a blocking pattern.

“I am a believer of the balancing effect of the weather and would not be surprised if the storm season became more active after this period of calm.” 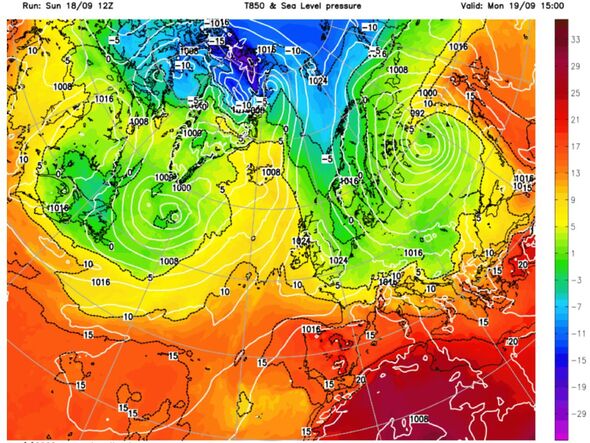 Weather models favour a particularly active Atlantic hurricane season which could start to shake the UK as soon as October.

Neither Danielle nor Earl made much impact in the UK, with only a rise in temperatures from the influence of tropical air swept in by ex-Hurricane Danielle.

Hurricane Fiona, which has wrought havoc across Puerta Rico, whipping up floods, devastating winds and power cuts, shows signs of veering towards Europe.

The first named storm of the season could hit as early as next month, according to some independent forecasters.

Exacta Weather’s James Madden said: “Most forecast models are opting for an above-average hurricane season, and we think that this will start to impact the UK throughout October and into November.

“Such an active period could bring the potential for several named storms to strike Britain.

“A number of these will be ex-hurricanes that have become large-scale low-pressure systems by the time they arrive on our shores.

“However, the remainder of the month, particularly in the final third, hints at a reversion to cooler, wetter and windier weather for many as high pressure is nudged away and replaced by low pressure.”

In the meantime, Britons can look forward to at least another week of dry, settled but chilly weather.

Overnight temperatures will plunge as heat ‘radiates’ from the ground under clear skies bringing to parts the risk of morning frosts, Mr Dale explained.

He said: “With clear overnight skies, radiation will bring a rapid cooling of the ground.

“This will lead to some dewy mornings and in Scotland, and the glens, there is the risk of temperatures falling to freezing, and this will bring the risk of frost.

“In terms of rain, through the start of the week, certainly on Monday, there will be no need, other than along the east coast to bother with raincoats or umbrellas.”

Britons planning on being outside on Monday during Her Majesty the Queen’s funeral are promised clear skies.

Dry weather should hold out until mid-week when a band of rain will move into Scotland before triggering more widespread showers.

Weathertrending meteorologist John Hammond said: “For London, for the funeral of Her Majesty, it will stay dry albeit quite cloudy.

“On Tuesday, there will be some cloud toppling in, but still a lot of dry weather.

“From mid-week some thicker cloud and some proper rain will turn up across the northwest of Scotland, and that rain will then move its way erratically southwards and eastwards across the country on Wednesday night and Thursday.”

Colder air will sweep the country ahead of next weekend bringing further chilly nights and the risk of frost, he added.

‘This is for my children’: Hong Kongers prepare to seize UK offer of a new life