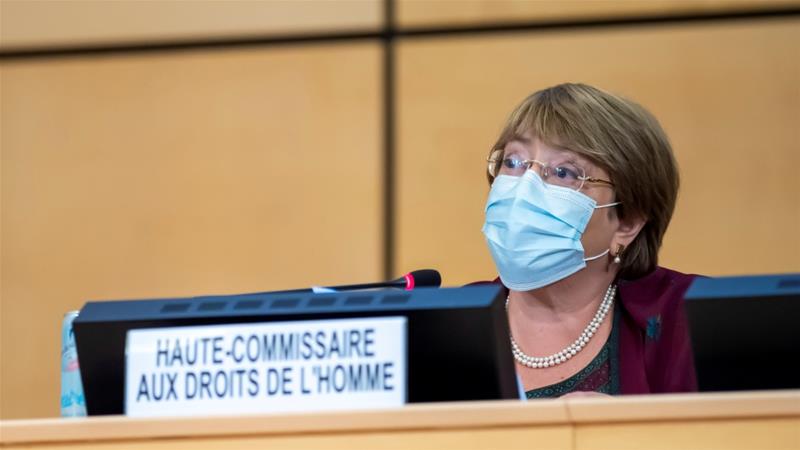 Myanmar’s alleged continued targeting of civilians in its Rakhine and Chin states could constitute additional war crimes and crimes against humanity, the UN High Commissioner for Human Rights has said.

Military operations in 2017 forced some 750,000 Rohingya to flee from conflict-torn Rakhine state to Bangladesh in violence that now sees Myanmar facing genocide charges at the UN’s top court.

Speaking at the opening of the 45th Human Rights Council in Geneva, Bachelet decried that the abuses against the Rohingya and other minorities in the country were continuing.

“People from the Rakhine, Chin, Mro, Daignet and Rohingya communities are increasingly affected by the armed conflict in Rakhine and Chin States,” Bachelet said.

She pointed to “disappearances and extrajudicial killings of civilians; massive civilian displacement; arbitrary arrests, torture and deaths in custody; and the destruction of civilian property”.

Bachelet said government administrators were now reclassifying areas where Rohingya villages were previously located, removing the names of villages from official maps and potentially altering how the land may be used.

“This should end immediately, and the prior situation should be restored,” she said.

Satellite images and witness accounts indicate that areas in northern Rakhine have been burned in recent months – something contested by the Myanmar government.

“This only underscores the need for independent, on-the-ground investigation,” she said.

A spokesman for the Myanmar military did not answer phone calls from Reuters news agency, seeking comment.

Myanmar’s military has justified its 2017 operations as a means to root out Rohingya fighters after attacks against about a dozen security posts and police stations.

The Rohingya are widely seen as “illegal immigrants” in Myanmar, denied citizenship and rights.

Bachelet highlighted that most Rohingya will not be able to vote in the forthcoming November elections, branding the situation as “disappointing”.

“The vast majority of Rohingya will be prevented from participating in the elections, since they have effectively been stripped of their previously recognised rights to vote and stand for office,” she said.