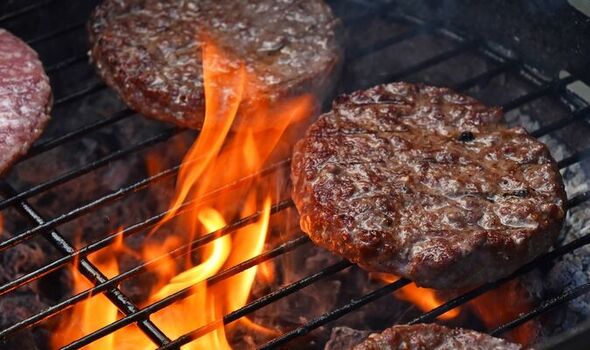 The British barbie is under threat amid warnings possible 40C heat could deliver more than a charred hot dog. Outdoor cooks are warned firing the coals could end in disaster as temperatures rocket this weekend.

Noel Summerfield, head of household at insurer Admiral, said: “Already this year, we’ve seen more garden fires reported to us than the same period in the previous three years, so it’s a good time to remind people to take care with any type of fire in the garden.

“With soaring temperatures of up to 40C, eight percent higher than the summer of 2020, we are urging homeowners to take extra care when indulging in burgers and hot dogs this week.”

Make-shift camp fires and so-called ‘fire pits’ can also spark trouble in the heat, he added.

He said: “We’ve also seen an increase in claims related to fire pits as they grow in popularity­–people should take extreme care if they are topping up the fuel of a bio-ethanol fire pit which is lit or switched on because they are extremely flammable.”

It comes as Britain’s raging heatwave threatens to melt a raft of temperature records.

While 40C this weekend is ‘not out of question’, highs are more likely in the mid- to upper-30Cs.

The UK record of 38.7C captured in Cambridge, in 2019, however, is fiercely under threat.

Jim Dale, meteorologist for British Weather Services, said: “There is around a 25-percent chance that we could see 40C, so it’s not impossible, but unlikely.

“Temperatures will, however, rise through the weekend and we could see highs in the mid- to high-30Cs.

“The odds are probably around 50-50 for the UK maximum temperature record to fall.”

James Madden, forecaster for Exacta Weather, added: “The heat surge for the weekend and the early part of next week keeps growing in intensity, and there is a chance we could exceed 35C.

“A small nudge in the right direction would topple the record.”

Brits toning up for the beach have been warned to avoid exercising during the hottest periods.

London-based health and wellness coach Ryan French, founder of Military Outdoor Fitness (MOFit), said: “Avoid exercising during the hottest part of the day, and remember to keep hydrated–around three to five litres a day is ideal.

“If you are exercising outdoors, you should aim to do this early and keep in the shade.”

The Met Office has issued an amber ‘extreme heat’ warning across southern and central Britain on Sunday and Monday.

Met Office deputy chief meteorologist Rebekah Sherwin said: “Temperatures are likely to peak at 33C in the southeast, with warm weather likely to continue throughout this week.

“It looks likely to ramp up late this week and into early next week.

“From Sunday and into Monday, temperatures are likely to be in excess of 35C in the southeast.

“Elsewhere, temperatures could be fairly widely above 32C in England and Wales, and in the mid-to-high 20s Celsius further north.”

Toilet paper is next likely victim of world's container crisis