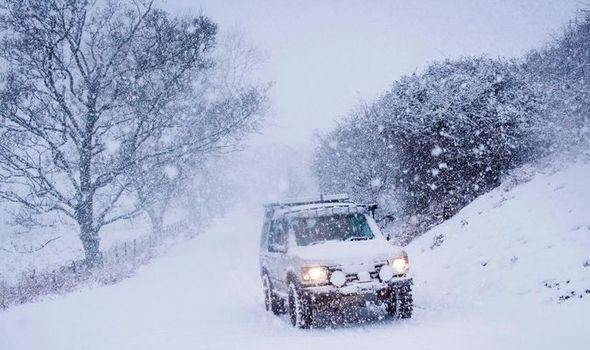 Temperatures were set to plunge below zero last night, with most people feeling their first true taste of winter today. Forecasters said gale-force winds blowing in with the snow are likely to cause travel chaos over the weekend.

They predict gusts approaching 70mph could batter the North East and Scotland – and in some exposed areas temperatures will plummet as low as -7C.

Yellow weather alerts are in place across parts of Scotland and Northern Ireland for tomorrow, and for most of the UK on Saturday.

However, the Met Office says London and the South East is expected to avoid the worst of the icy conditions. A spokesman said: “Prolonged periods of snowfall are possible on higher ground in parts of Scotland and northern England and Wales at the end of the week.

“There is an increasing signal of snow at higher elevations and indications suggest that areas above 200 metres (656ft) in Scotland have the highest chance from Friday.”

The spokesman also warned there may be snow in other areas of northern England and Wales, such as the

Pennines and Snowdonia, “though this is unlikely to be heavy enough to settle”.

And while it said there was “no sign” of snow in lower areas of England and Wales, the Met Office sounded a note of caution, saying: “Never say never.”

What is happening where you live? Find out by adding your postcode or visit InYourArea

The coldest daytime temperature for London and the South East is forecast to be around 6C (42F) on Saturday – which is not unusual.

But householders across the country have already been warned to be ready for another menace – three months of potential flooding.

Long-term forecasts have shown wetter conditions are more likely over the next three months, with the worst of the deluges from January.

However, the Environment Agency this week revealed only a third of homeowners in flood-risk areas are prepared for the worst.

Modi to hand over social media accounts for Women's Day