Freezing weather will once again bring temperatures below zero in Britain. Temperatures will plunge over night with northern areas of the nation bearing the brunt of the cold snap.

On Monday, according to weather maps from WXCharts, temperatures could plunge to -5C in parts of Scotland, while wide areas of the country will also dip below the 0C mark.

In North England, the weather maps reveal temperatures between -2C to 0C, while Wales will widely have sub zero temperatures.

London and South East England will have the warmest of the weather, however, temperatures are not due to jump very high and will stay around 2C in the morning, before heating up slightly during the day.

According to the Met Office, the weather will start turning colder as soon as tonight. 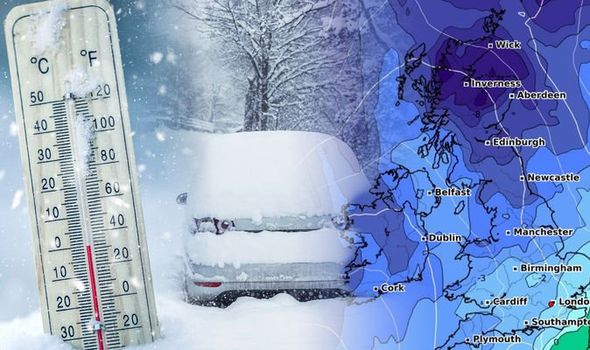 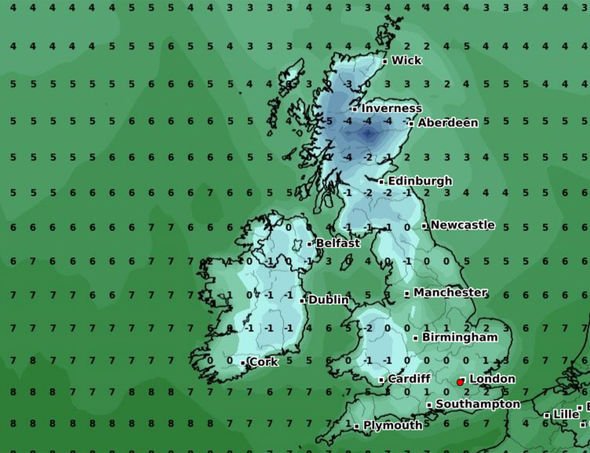 There is not much snow expected across the country, however, some is due in Scotland.

According to WXCharts, approximately 0.8 inches (2cm) of snow will fall in the Scottish Highlands on Monday.

Snow risk in cities are less likely, however, with Edinburgh seeing a 0 percent chance of snow on Monday. 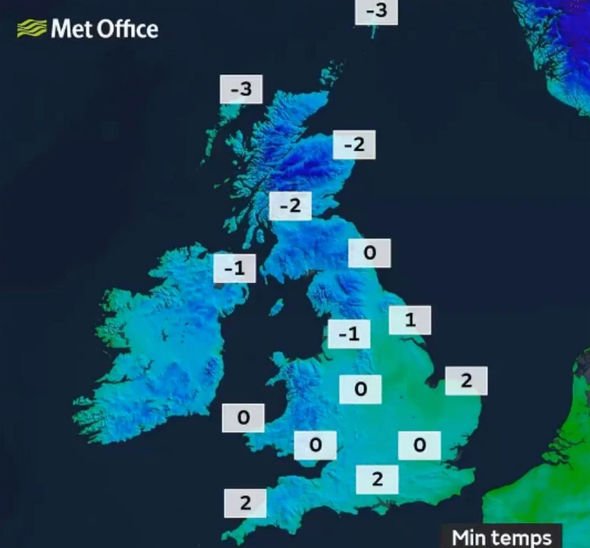 However, this jumps to 24 percent on Wednesday, according to NetWeather.tv.

In Glasgow, there is more chance of snow on Thursday, with NetWeather.tv reporting a 42 percent risk of snow.

In London, Birmingham, Manchester and Liverpool, the forecaster show 0 percent risk of snow this whole week.

According to the Met Office, the weather will be “dry and sunny” for most places with lighter winds on Monday.

However, cloud, wind and rain will spread in from the west to affect Northern Ireland, Scotland and then northwest England later.

Showers will be heaviest in Northern Ireland with Scotland seeing coastal gales.

Winds could reach up to 45mph, WXCharts said, in coastal areas in Wales and Scotland.

In the Met Office’s outlook for Tuesday to Thursday, the weather will stay mostly dry and bright in south.

Elsewhere, the weather will be cloudy with outbreaks of rain, heavy and persistent at times in the west.

Brighter, showery and colder conditions spreading from the north later on Thursday. 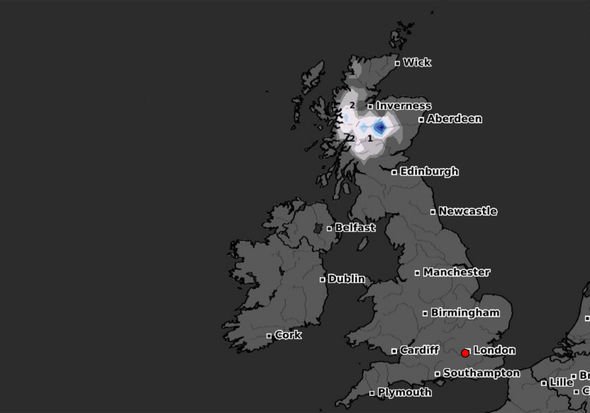 From Thursday, March 19 to Saturday, March 28, the Met Office’s long-range forecast says: “Rain and drizzle should continue to clear southwards through Thursday, becoming restricted to the southwest later in the day.

“Elsewhere should be brighter with spells of sunshine and the odd blustery shower lingering further north.

“The dry spells are likely to continue into Friday and Saturday, with some wintry showers over the north and east.

“Looking further ahead, there is a strong signal for conditions to remain drier and calmer.

“This will mean plenty of sunshine for most, with clear skies overnight leading to widespread frosts.

“Day temperatures are likely to be on the cold side too, but feeling pleasant enough in the spring sunshine.

“Weather fronts may approach the north and west occasionally, increasing cloud amounts, but these are likely to be weak with limited rainfall.”