The latest heat maps from Netweather have turned red to show sweltering highs of 36C in France on Friday, June 25. The same temperature maps then show the red shades of hot air moving upwards from France and towards south-eastern England, on the same day. The hot air could send temperatures in Portsmouth and Brighton soaring to 26C.

In London, Kent and Essex, highs of 22C could also arrive on the same Friday.

Northern regions may be cooler, but still hit 21C in Leeds, Manchester and Liverpool.

Brian Gaze, a forecaster at Weather Outlook, predicted “above-average temperatures” to bake the southern parts of the nation towards the end of June.

He said: “Fine and settled conditions with above-average temperatures are expected for a time. 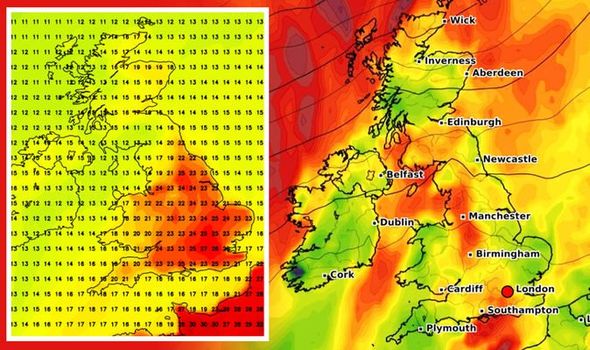 “It could become very warm in the southern half of the UK, but the risk of thundery outbreaks increases.”

The BBC’s long-range forecast between Saturday, June 12, and Sunday, June 27, predicted a “short-lived heatwave” to bake the nation, before a cooler front then arrives at the end of the month.

The forecast said: “As high pressure moves in from the southwest this weekend, much of the country will see some very warm and sunny weather, especially on Sunday and Monday.

“The hottest conditions will be in the Southeast, where a short-lived heatwave is possible. 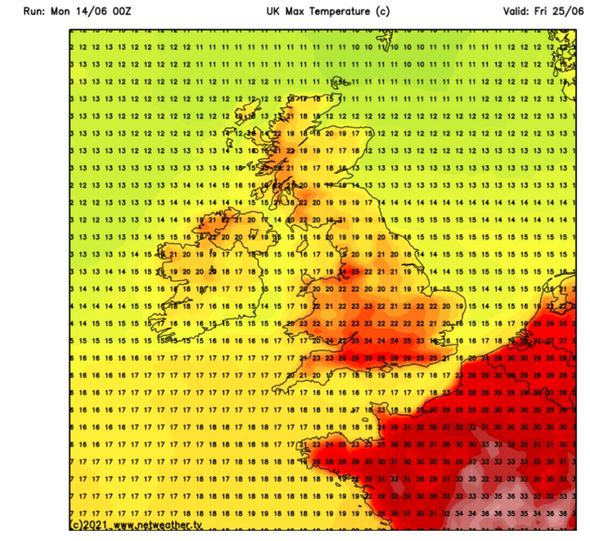 “Meanwhile, northern areas will become increasingly cloudy and wet next week as fronts move in.

“A cold front on Wednesday will usher in a cooler and more unsettled air mass that will stick with us for the rest of the week and beyond, bringing temperatures nearer to normal.”

The Met Office also said a “very warm” spell is expected to hit the UK during the last week of June.

The forecast between Friday, June 18, and Sunday, June 27, said: “It is likely to be warm, perhaps very warm and humid towards the southeast at first with the risk of thundery showers across southeastern areas. 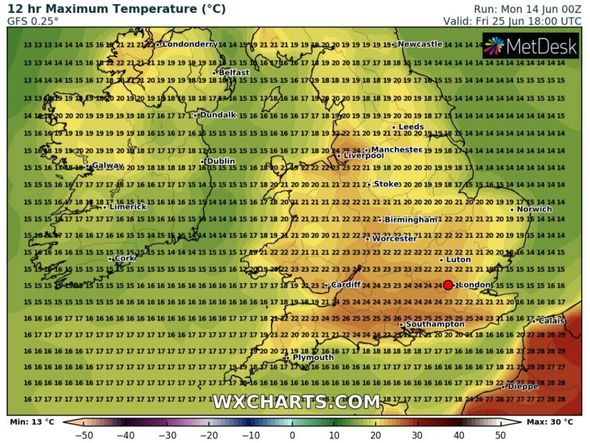 “Elsewhere sunny spells and fresher conditions, with some rain and thicker cloud towards the north and west at times.

“The fresher air is then likely to gradually spread to the rest of the country bringing a change to widely cooler more changeable conditions towards the end of the week, with a low risk of warm and humid air returning to the far southeast at times.

“This will likely bring occasional spells of rain or showers interspersed with drier and sunnier conditions.

“Overall, temperatures will likely average out to be close to normal.” 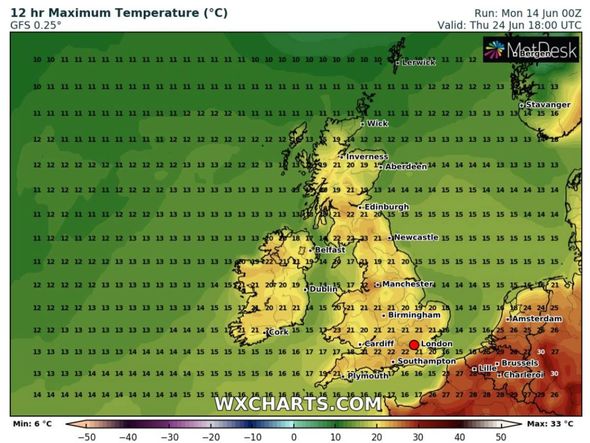 Before that, Nick Finnis at Netweather predicted scorching highs of 30C to hit over the coming days, before thunderstorms arrive later in the week.

He said: “On Wednesday, a cold front bringing a band of rain southeast across Scotland into north west England in the morning will stall and weaken.

“Meanwhile, an upper trough over the Atlantic associated with low pressure to the northwest will amplify southwards, which will back the flow and pull in a plume of very warm and humid air in from the near continent again across much of England ahead of the weakening cold front stalling across northern England and Wales,.

“Plenty of sunshine across central, southern and eastern England allowing temperatures to rise into the mid-to-high 20s Celsius. 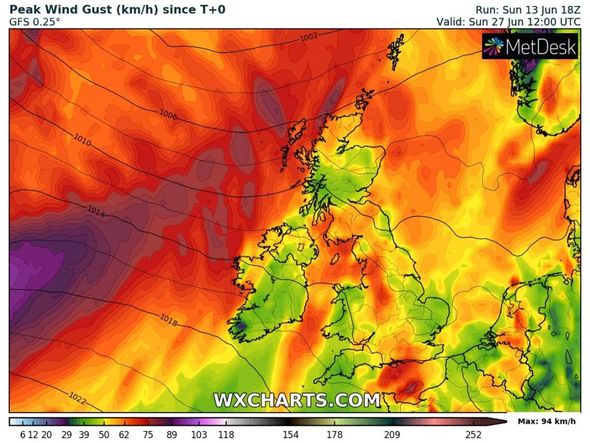 “We could potentially hit 30C in SE England, likely in the London area.

“But trouble is brewing to the south for later in the day and overnight into Thursday.

“A thundery low developing over northern France, generated by cooler air aloft of the upper trough edging in from the west overrunning the warm and humid plume pushing north out of France, will drift north and looks to push an area of heavy rain and thunderstorms northeast across much of England and perhaps east Wales late Wednesday evening and through the early hours of Thursday.”