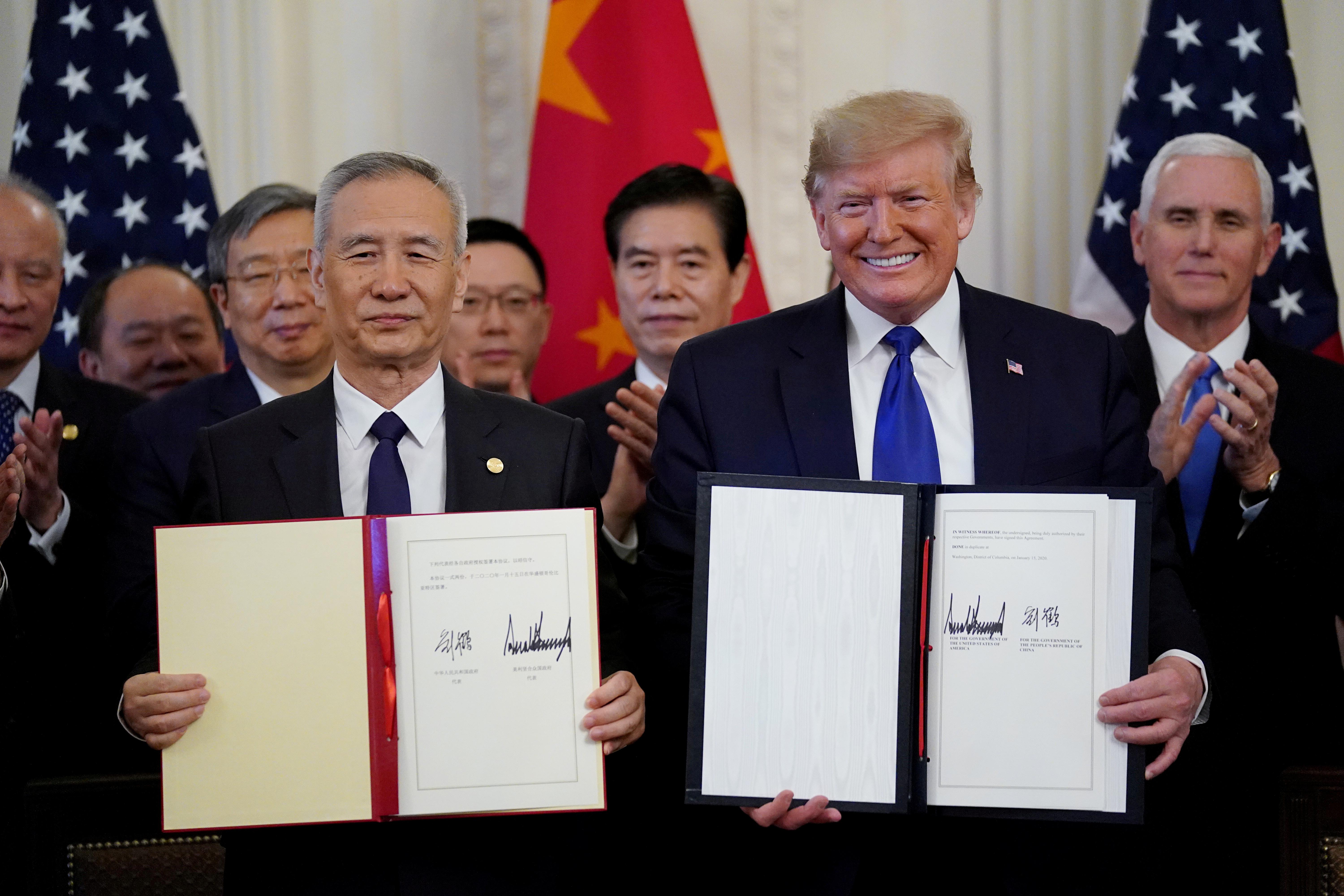 His administration assured farmers that they would no longer need the billions in aid the government had provided to offset their losses from the trade war Trump launched with China in 2017.

Now, with Chinese buying of most farm goods still lagging their 2017 levels, the administration says it may extend the farm subsidy program for a third year – money farmers say they still desperately need. Such an extension would expand what has already been a massive industry bailout.

The about-face reflects vagaries in the so-called Phase 1 trade deal: China did not commit to a timeline for ramping up imports of U.S. farm goods to make the 2020 goal of $36.5 billion, up from $24 billion in 2017. It also underscores economic uncertainty as China slowly reopens ports, roads and factories amid a coronavirus outbreak that has killed thousands of people and spread globally.

Demand for U.S. soybeans and sorghum have also been curbed by another deadly disease – African swine fever – that has killed millions of pigs and shrunk China’s massive herd by about half since August of 2018, according to expert estimates. The crops are staple ingredients in animal feed.

Although the U.S. Midwest planting season is still about a month away, the slow ramp-up of Chinese purchases means farmers need guarantees of government aid now in order to invest in seeds and fertilizer and secure bank loans.

“The rubber is not hitting the road like we have been told it would,” said Doug Schroeder, chairman of the Illinois Soybean Association, who grows soybeans and seed corn on his 4,000 acre farm near Mahomet, Illinois.

The administration devoted $16 billion to trade aid, much of that in direct payments to farmers, up from $12 billion in 2018. Trump, who is up for reelection in November, said in a Feb. 21 tweet that farmers would have more aid in 2020 if they need it.

The trade subsidies represents one of the biggest-ever farm sector bailouts not related to a natural disaster. For perspective, the trade-aid that farmers have received is nearly triple what the Treasury Department estimated it ultimately cost taxpayers to bail out the auto industry during the financial crisis of 2008.

For many farmers, the aid represents both a lifeline and an awkward reality of government dependence.

With the trade aid adding to existing government disaster programs and taxpayer-subsidized crop insurance, government subsidies accounted for about a fourth of U.S. net farm income in 2019, according to data from the U.S. Agriculture Department’s (USDA) Economic Research Service. And net cash income is expected to fall sharply this year without those subsidies.

Dozens of farmers interviewed by Reuters said without more assistance they may not be able to plant this spring. China was the top buyer of U.S. soybeans in 2017 and a top importer of sorghum, dairy and other products.

USDA data showed that U.S. exporters shipped $1.36 billion worth of agricultural goods to China during January, well below the $2.39 billion shipped out in January 2017.

Purchases of sorghum have picked up slightly in recent weeks but are still down from 2017. But purchases of soybeans, typically the top U.S. agricultural export to China, have totaled just 1.13 million tonnes, according to the data. That compares with 2.83 million tonnes in the same period of 2017.

China’s ministry of commerce and state planning agency did not respond to requests for comment.

“We certainly haven’t seen the market rise as we were hoping after the Phase One Agreement, but I believe it will,” USDA Secretary Sonny Perdue said in a Feb. 21 statement, just after Trump’s tweeted about the possibility of trade aid. “I hope we can show that a third round is not needed for 2020 — we still believe farmers want trade rather than aid.”

The agreement was signed on Jan. 15 and officially took effect on Feb. 15. Trump’s economic adviser Larry Kudlow has said coronavirus could slow China’s purchases. The trade agreement contains a clause that calls for consultations if a natural disaster or other unforeseeable economic event delays compliance, although China has not invoked that clause in reaction to the coronavirus epidemic. A U.S Treasury official said last month the government does not expect the virus to change China’s commitments.

Farmers are curbing investments despite Trump’s repeated assurances. Many are shifting some acreage from soybeans to corn, which is less dependent on the Chinese market, while others are buying cheaper seed and being more cautious about buying new machinery.

“Most farmers are doing more repairs on their equipment, not buying new or trading in equipment for something new, like they have in the past,” said Roger Hadley, 67, an Indiana corn and soybean farmer and president of the Allen County, Indiana, Farm Bureau.

Farm subsidies are nothing new in the United States and accounted for a substantial share of farm incomes before the trade disruption.

The trade-aid program has nonetheless been criticized by some academic researchers, including Joseph Glauber, senior research fellow at the International Food Policy Research Institute and a former USDA chief economist. He found at least five empirical studies showing USDA overstated the trade war impact on U.S. soybean market and farmers, and the agency may have overpaid some producers.

USDA officials have disputed these findings, but the U.S. Government Accountability Office is investigating the program. U.S. Senator Debbie Stabenow, a Democrat from Michigan, had requested the GAO examine whether USDA’s model for distributing payments accurately reflected trade-war damage to incomes – and whether the agency was effective in preventing fraud, waste and abuse in the program.

Even with generous aid, however, farm debt levels are forecast this year to reach the highest levels seen since 1982, when adjusted for inflation, according to USDA data.

In response, farm lenders say they are closely reviewing their customers’ books, and tightening the issuance of fresh loans to financially vulnerable farmers who are dependent on crop prices increasing because of increased buying by China.

If Trump comes through with a third round of aid, it could be smaller than the previous rounds because of political pressures, said Jim Knuth, senior vice president of Farm Credit Services of America, the largest agricultural lender in the upper Midwest.

“The fact is,” Knuth said, “it’s going to be politically popular on both sides of the aisle to support farmers and agriculture this year.”