WASHINGTON/BRASILIA (Reuters) – U.S. President Donald Trump on Thursday said he was not concerned about the possibility of being exposed to the coronavirus after dining last week with a Brazilian government official who has since tested positive for the disease. 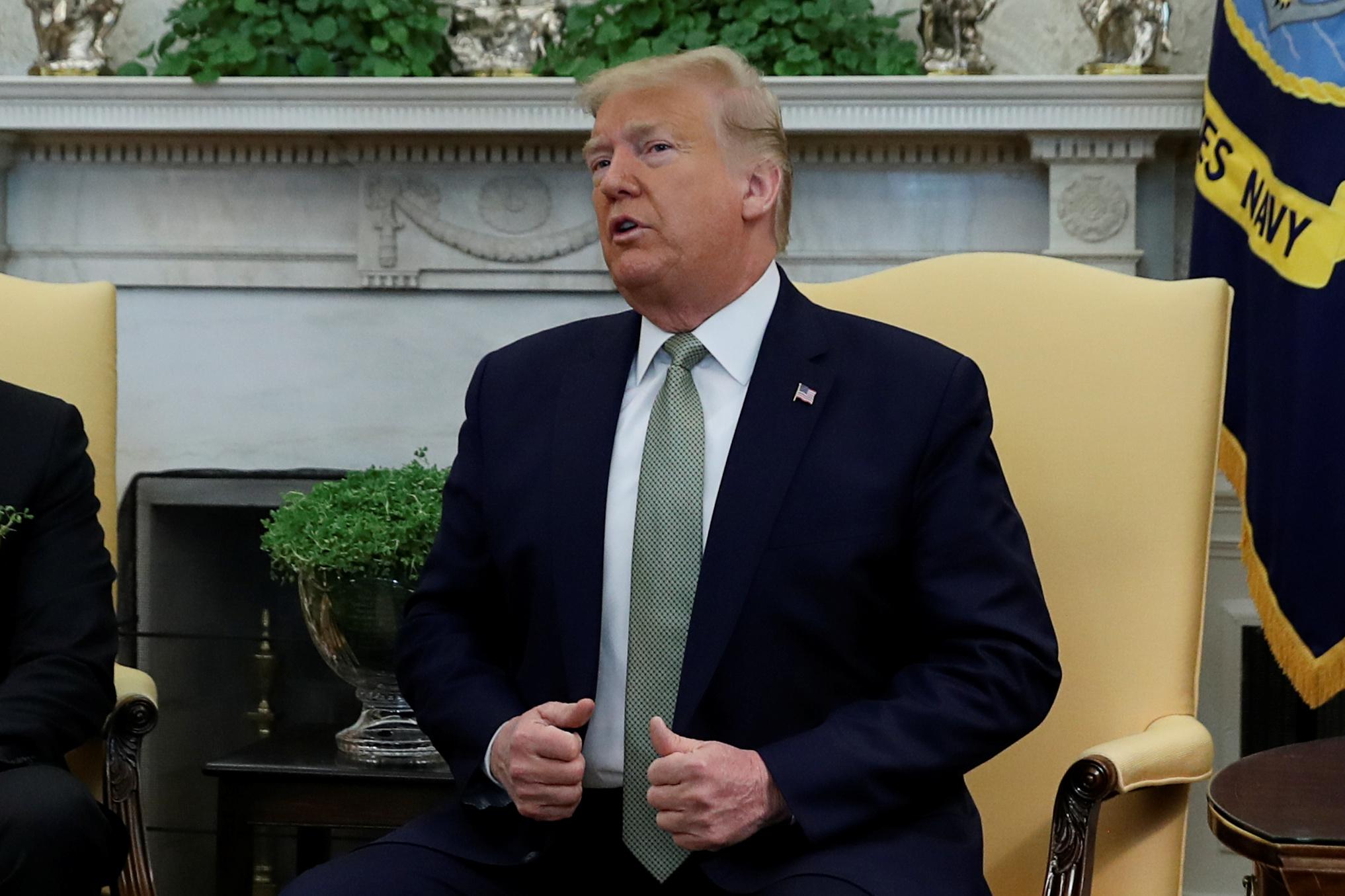 The day after announcing curbs on travel to the United States by European Union residents, Trump brushed off concerns about his possible exposure to the virus, which has sickened more than 126,000 people in a worldwide pandemic.

“Let’s put it this way: I’m not concerned,” Trump told reporters while meeting with Irish Prime Minister Leo Varadkar in the Oval Office.

Brazilian President Jair Bolsonaro, who had been at the dinner with Trump in Palm Beach, Florida, has been tested for coronavirus and is awaiting the result, his son Eduardo wrote on Twitter, adding that the president was not showing any symptoms.

Brazilian officials on Thursday confirmed that Brazil’s communications secretary, Fabio Wajngarten, has the coronavirus and is now under quarantine at home.

The entire Brazilian delegation that traveled to Florida with Bolsonaro is being tested for the virus, a senior member of the president’s staff told Reuters.

White House spokeswoman Stephanie Grisham said Trump and Vice President Mike Pence had “almost no interactions” with the Brazilian official and that they “do not require being tested at this time.”

She said the White House medical unit and the U.S. Secret Service are ensuring that “every precaution is taken” to ensure the good health of Trump and Pence, their families and staff.

“We are monitoring the situation closely and will update everyone as we get more information,” she said.

The coronavirus pandemic and fallout is shaping up to be perhaps the greatest crisis of Trump’s presidency. Former Vice President Joe Biden, the front-runner for the Democratic nomination to challenge Trump’s bid for re-election in November, criticized the administration’s handling of the coronavirus outbreak on Thursday afternoon.

Wajngarten had been on an official visit to the United States with Bolsonaro and posted a photo on Instagram of the meeting at Trump’s Mar-a-Lago club last Saturday, showing him standing next to Trump while wearing a “Make Brazil Great Again” cap. Pence was next to Trump.

Brazilian newspaper O Estado de S. Paulo reported that Bolsonaro’s test results were due on Friday. It added that other Cabinet ministers on the trip will also be tested.

Two Republican U.S. senators who attended the visit by the Brazilian delegation said they would quarantine themselves.

Senator Rick Scott of Florida, a Republican, on Thursday said he had met with a member of Bolsonaro’s staff.

“While I do not believe I interacted with the infected person, that individual was in the same room as me,” Scott said in a statement. “The health and safety of the American people is my focus and I have made the decision to self-quarantine.”

U.S. Senator Lindsey Graham of South Carolina, a close Trump ally, did not recollect direct contact with Bolsonaro while at Mar-a-Lago but would quarantine himself out of “an abundance of caution” and on his doctor’s advice, his office said in a statement.

Bolsonaro’s son Eduardo, a federal congressman who also attended the meeting at Mar-a-Lago, wrote on Twitter that he was on his way to get tested. Four days ago, he posted a photo of himself standing behind the U.S. president, next to Trump’s daughter, Ivanka, and close to his son-in-law, Jared Kushner.

Brazil’s foreign minister, defense minister and Brazil’s chief national security advisor were also in the image, along with the Brazilian president.