BEIRUT (Reuters) – The St. George Hospital where Soha Khalaf works as a nurse lies less than a mile from Beirut port. She had no time to recover from the enormous explosion that blasted over the city. 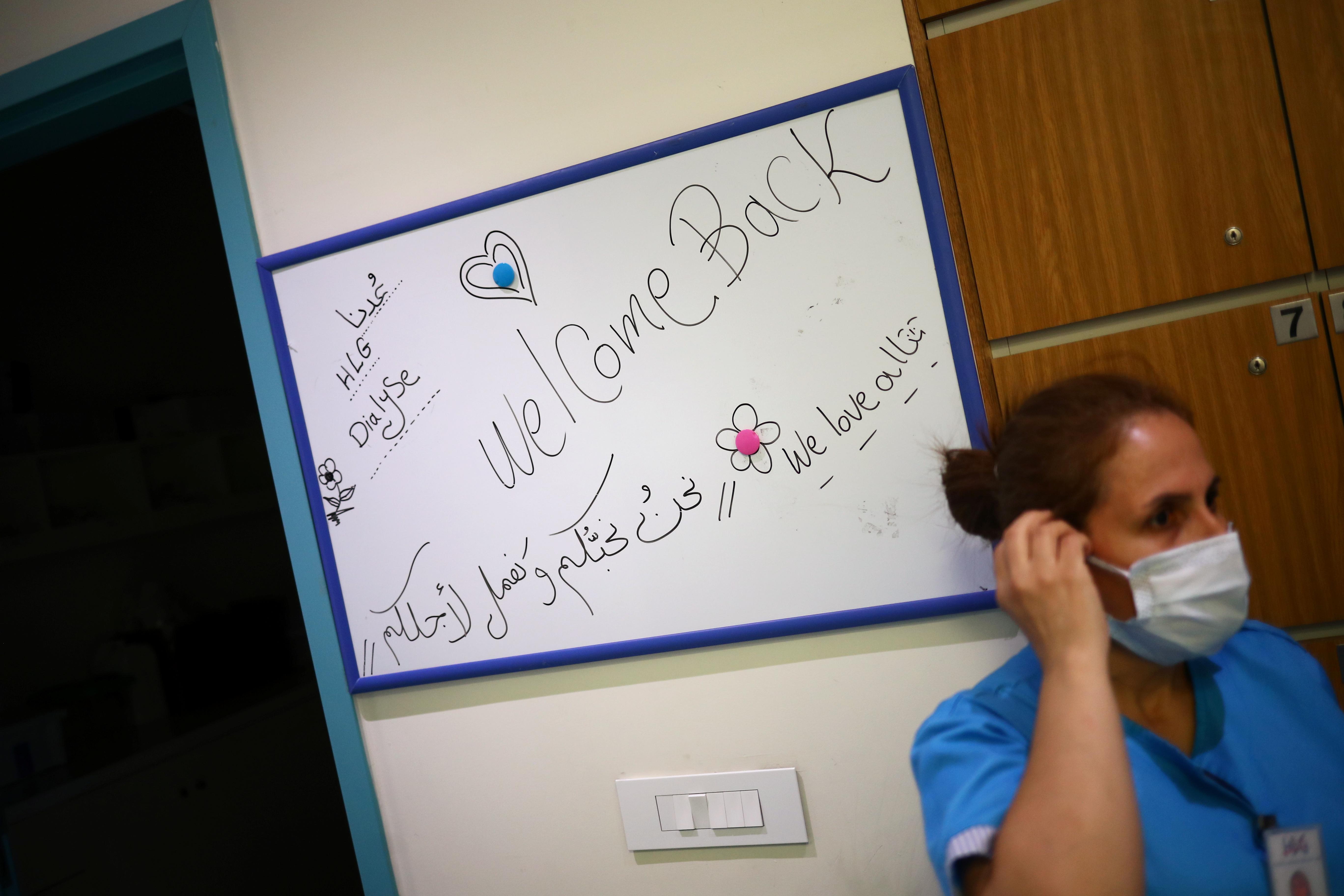 The ceiling crashed onto her head and tears streamed down her face, but she stuck to her task.

“People ran here yelling, ‘please we need the ER.’ But the ER was gone. And wherever I turned, I saw staff rushing down from other floors screaming,” recalled Khalaf, assistant head nurse at the emergency room of Lebanon’s oldest hospital.

Needles flew across the hall. Blood covered the floor. The lights went off.

Hundreds of people poured in from across the Lebanese capital after the Aug. 4 warehouse blast, which killed more than 170 people and demolished neighbourhoods.

“We just kept working, even as some of us bled, and we cried and cried.”

With her colleagues, Khalaf stitched, intubated and bandaged victims on the pavement outside the ER. They stopped random cars to send patients to other hospitals, and relied on light from mobile phones as it got dark.

Across Beirut, doctors and nurses recounted a night of horror that shook up veteran medical workers in a city no stranger to explosions.

The aftermath of the blast has also raised fears for a healthcare system in tatters, already fighting a coronavirus oubtreak which has seen 87 deaths and more than 7,100 cases since February.

Beirut’s hospitals – which long attracted patients from around the region – have also been wrestling with the country’s financial meltdown since late last year.

There are shortages in everything from dialysis equipment to syringes, with the state owing hospitals millions of dollars in arrears.

Now with hospitals turned into trauma centers and coronavirus cases still rising, some healthcare workers are asking: how can the system cope?

On the night of the blast, hospitals used two months’ worth of supplies, said Rona Halabi, spokeswoman for the International Committee of the Red Cross.

The explosion, which injured more than 6,000 people, knocked out three hospitals in Beirut and damaged 12 other facilities. Days later, pressure piled on thanks to hundreds of injuries at protests against Lebanon’s leaders.

“These times are unparalleled to say the least,” Halabi said, warning that the need for mental health care was also rising after scores of people suffered trauma.

“I have seen many explosions and a war. But I’ve never seen what I saw on August 4,” said Khalaf, who has worked at St. George for 28 years.

The blast killed four nurses there. A few floors above, a doctor had delivered a baby as the building shook.

The next day, Khalaf and her friends returned to help clear rubble from the blast, which officials blamed on explosive material stored in unsafe conditions at the port.

When the shockwaves hit Naji Abi Rached’s hospital all 17 elevators crashed. Staff had to carry some patients down eight flights of stairs. They could not evacuate patients in the COVID-19 ward.

Abi Rached, medical director at the nonprofit Lebanese Hospital Geitaoui, said the virus could now spread faster. With nearly a quarter of a million people homeless, the risk has grown. Lebanon recorded on Tuesday 300 new infections and seven deaths.

“This blast dealt the final blow, the knockout,” he said.

Still, a week later, with the help of volunteers, the ER was running again. The dialysis center also opened, although with shattered windows.

For Beatrice Karam, a nephrologist who returned to Beirut after living abroad, the past week killed any hope for stability. Many of her friends felt the same, she said, warning of a looming exodus of doctors.

“It’s like there was a blast inside of me too. And I had no feelings anymore, and I just want to leave.”

Food aid for Houthi-controlled Yemen to be halved