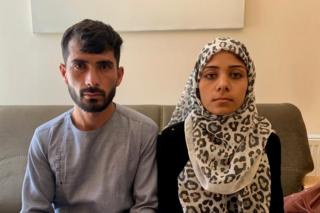 It should’ve been the happiest day of their lives. Instead, it was the worst.

Mirwais and Rehana’s wedding in Afghanistan’s capital Kabul last year was targeted by an IS suicide bomber, killing more than 60 of their guests. The couple lost close family members and friends, and the attack took a heavy toll on their mental health.

This week marks the anniversary of the attack. For the first time, Rehana, 18, has decided to speak publicly about what happened that day.

“Every night I have nightmares,” she told the BBC. “I cry and I can’t sleep.”

Crowds of people make her anxious, as does travelling by car. “Whenever I hear gunshots or explosions it takes me back to that day, and I think something will happen to me again,” she said.

The relatives of some of those who died that day have raised the idea of holding a protest outside the wedding hall where the attack took place, to commemorate the anniversary and call for the attackers to be held to justice. But Mirwais won’t attend, he said. His hands begin to shake at just the thought of the blast.

“Before the wedding we were so happy,” he said. “All of a sudden it was as if we had fallen from the sky to the ground. We lost all our happiness.”

The couple’s wedding was targeted because they are from Afghanistan’s Shia minority, which the Islamic State group considers heretical. IS militants have launched repeated attacks on the Shia community in recent years.

For Rehana and Mirwais, the trauma of the attack was exacerbated unexpectedly when some relatives and acquaintances held them responsible for the bloodshed.

“One day I was shopping and I met a woman who had lost a relative at my wedding,” recalled Mirwais. “She called me a murderer.”

Some of the families of the victims began to see the couple as their “enemies”, he said. Mirwais, a tailor, had to close his shop because of the abuse.

Rehana was also targeted, with people suggesting if the couple had never gotten married the attack wouldn’t have occurred. “Everyone blamed me for what happened,” she said, softly. “I just keep quiet and say nothing.”

IS, which claimed responsibility for the blast, is far less powerful in Afghanistan than the Taliban, but the group has carried out dozens of deadly attacks. In May, it was blamed for a horrific assault on a maternity unit in Kabul, where militants killed 24 women, children and infants. Earlier this month, IS laid siege to a prison in the eastern city of Jalalabad, freeing hundreds of inmates. The violence comes despite the group’s loss of territory and the detention of a number of its senior leaders.

For Rehana and Mirwais, the ongoing unrest forces them to relive their own experiences.

“A few weeks after the wedding, there was an explosion in another part of Kabul, and my wife was so afraid she fainted,” said Mirwais.

Rehana is now receiving rare psychological support, thanks to a Kabul-based charity, Peace of Mind Afghanistan. She said the therapy was helping her to process the confusion and pain of the attack, and being held responsible for it. “It is good for me to least be able to share my problems,” she said.

Her psychologist, Lyla Schwartz, spoke to BBC alongside the couple. She said Rehana was making cautious progress, but “then an explosion happens, and she really regresses”.

Despite the thousands killed or wounded every year in Afghanistan, few ever receive counselling. In a country where access to basic healthcare is poor, mental health is often not seen as a priority. Rehana and Mirwais, who would otherwise not be able to afford private therapy, have benefited from the work of the charity.

Speaking to a psychologist and sharing her problems had helped her immensely, Rehana said. Mirwais agreed. “Afghanistan needs many more people working on mental health,” he said. “Every Afghan has suffered pain or lost a family member.”

Peace talks between the Afghan government and Taliban are expected to begin in the coming week, but fighting continues. IS is not part of the negotiations. Rehana no longer feels safe in Afghanistan, she said.

Ms Schwartz is hoping to raise funds to allow the couple to spend some time abroad, away from the suicide blasts, away from blame for the tragedy that befell their wedding.

Mirwais has also received some counselling for the trauma, but like Rehana he remains disillusioned about the prospects for peace.

“Before my wedding, they were saying peace is coming. It has been one year now, where is the peace?” he said.

“I am telling you, even after 10 years you will not see peace and stability in Afghanistan.”

CORONAVIRUS: US set to overtake Italy with fatalities as deaths reach 2,000 in ONE DAY