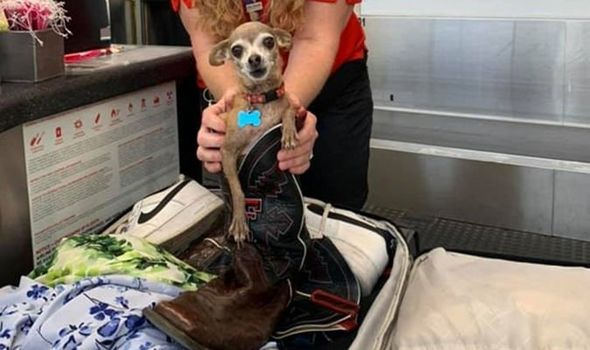 Jared Owens and his wife Kristi arrived at Lubbock Airport last month looking forward to a weekend in Las Vegas. The Texas couple were told to put their suitcase on the scale at the check-in and were told the bag was overweight.

The couple were asked to rearrange their suitcase and discovered their pet chihuahua, Icky, had snuck inside and hidden in Mr Owens’ cowboy boot.

Mr Owens told Texas TV station KCBD: “They put it on the scale and this bag is basically like five, five and a half pounds overweight.

“Really quickly we are like, oh, we have got to rearrange some stuff. Open it up and literally, there is our dog coming out of my boot with his head bopping up.”

He went on to say that Icky is a “burrower” and loves to burrow in clothes and “obviously suitcases now”.

Mr Owens also praised Southwest Airlines staff who helped the couple. He thanked one employee, Cathy Cook, who offered to watch Icky while the couple were gone.

He continued: “They have got a heck of an employee in Cathy. She went above and beyond and never made us feel, you know, they could have turned us in saying we were trying to smuggle a dog to Vegas or something.”

Thankfully, the couple had family nearby who were able to take Icky home so they could enjoy their holiday, NBCDFW reports.

The Owens’ said they are fortunate they found Icky before boarding the plane and will be double-checking their luggage from now on.

While You Were Sleeping: 5 stories you might have missed, June 24

Alan Cross has an anthropological question: Why do so many say they hate Nickelback?

No one hurt in Pembina Highway apartment fire