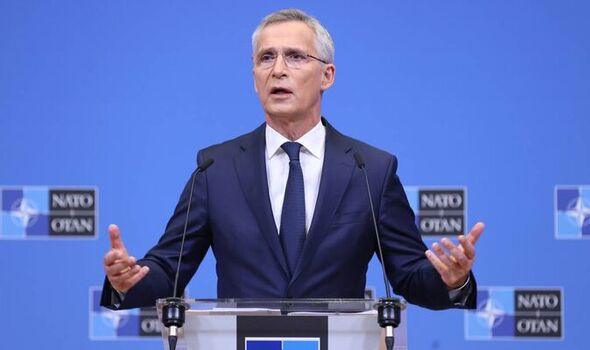 Jens Stoltenberg urged Western nations not to “weaken” their support for Kyiv’s brave fightback. But he stressed the conflict could “last for years”.

Mr Stoltenberg said soaring food and fuel costs were nothing compared with the hardship endured daily by Ukraine’s frontline forces.

And he warned “we would have to pay an even greater price” if Putin were to achieve his goals in Ukraine.

Speaking to German newspaper Bild, the former Norwegian prime minister said: “We must not weaken in our support of Ukraine, even if the costs are high – not only in terms of military support but also because of rising energy and food prices.”

The Nato chief has in the past week ramped up calls for alliance members to continue sending weapons to Kyiv.

He said hardware support could increase “the likelihood of Ukraine being able to push Putin’s troops out of the Donbas region”.

And she cautioned there is “still not enough” to have the artillery capability to “fight back all those rockets and artillery and tanks that are coming from the Russian Federation”.

It comes as the Kremlin defence ministry said in the 10 days to yesterday, Russian forces destroyed 10 howitzers and up to 20 military vehicles supplied by the West in Black Sea city Mykolaiv.

With no end to the fighting in sight, Britain’s top general told troops to prepare to fight Russia in a potential Third World War.

In his first address since starting his role last Monday, Gen Sir Patrick Sanders wrote: “There is now a burning imperative to forge an Army capable of fighting alongside our allies and defeating Russia in battle.

“We are the generation that must prepare the Army to fight in Europe once again.”

PM Boris Johnson warned Britons after returning from Ukraine on Saturday that “we need to steel ourselves for a long war”.

He said if Putin succeeds in securing territory “no nation anywhere would be safe” because “every dictator would feel emboldened to pursue their own ambitions by force”.

Yesterday, an adviser to Ukraine’s interior minister cited a heightened risk north of second city Kharkiv, as Russian troops seek to once again make it a “frontline city”. Vadym Denysenko said enemy forces are seeking to get closer to Kharkiv, in the country’s north east, to shell it.