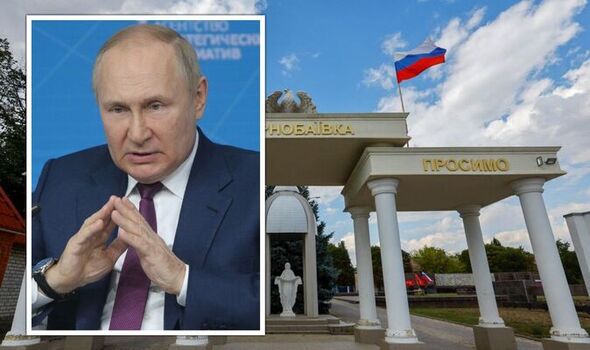 The Russian-appointed head of Kherson’s authorities, Kirill Stremousov, said the security situation in the region has delayed plans to hold a referendum. Kyiv has ordered a major offensive in southern Ukraine, and Ukrainian forces have targeted key bridges in the region to prevent Russian reinforcements from arriving.

Stremousov told Tass attacks on the Antonivskiy Bridge in Kherson city by Ukrainian forces had stopped traffic from crossing the Dnieper River, which links the two sides of the region.

Russian forces took control of the Kherson region in early March and have since made clear their intention to incorporate the region as part of Russia.

Ukrainian officials posted an image online of three soldiers raising a flag over a town in Kherson province, a southern region occupied by Russia since the war’s early days.

The Ukrainian military said on Monday that Russian forces have banned civilians from using any river crossings to escape the city, saying they will “shoot to kill” anyone who tries. The move could trigger a new humanitarian crisis if people are trapped.

Ukraine has ordered an information blackout since it launched what could be the most pivotal offensive of the war so far last Monday.

Officials have used social media to make only the merest of hints about the fighting that is thought to be raging from several directions in rural areas surrounding Kherson city.

“The Ukrainian counteroffensive is making verifiable progress in the south and the east,” said the Institute for the Study of War, a Washington, DC-based think-tank.

“The pace of the counteroffensive will likely change dramatically from day to day as Ukrainian forces work to starve the Russians of necessary supplies, disrupt their command and control, and weaken their morale even as counteroffensive ground assaults continue.”

Jack Watling, a research fellow from London’s Royal United Services Institute, wrote that Ukraine’s forces could be successful if they managed to drive Russian forces around Kherson city, which is predominantly on the west bank, towards the Dnieper River and meanwhile disrupt Russian supply lines.

“As they become more concentrated the [Russians] will also be more vulnerable to attrition from artillery,” wrote Watling. “Interdiction of supplies moving across Kherson’s bridges can prevent the city’s defenders from being effectively circulated or reinforced.”

The image of the flag being fixed to a pole on a rooftop, purportedly in Vysokopyllya in the north of Kherson, was released as President Volodymyr Zelensky announced that Ukrainian forces had captured two towns in the south and one in the east.

Russia is recruiting ‘thieves and killers’ from prisons