Vladimir Putin suffered a major blow to his war efforts after parts of The Kerch Strait Bridge collapsed, according to reports. The bridge was built in 2018 and designed to link Crimea into Russia’s transport network. It is a vital supply route for Russia’s southern army in Ukraine, which has been coming under increasing pressure from a Ukrainian counteroffensive in recent weeks.

The agency, citing a local official, said: “A fuel tank is on fire on one of the sections of the Crimean bridge.

“The shipping arches are not damaged.”

The official did not reveal the cause of the fire.

Another Moscow-appointed official said: “A cistern carriage is burning with fuel on one of the bridge sections. 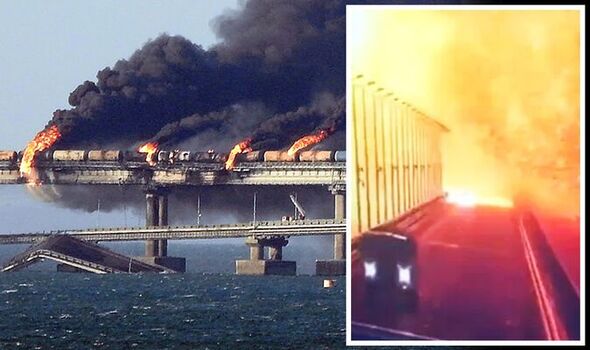 “Too early to talk about reasons and consequences. Work is under way to put out the fire.”

Photos circulating on social media appeared to show that the road span of the bridge had collapsed into the water.

Images also show fires burning fiercely in several railway trucks along the length of the train, numbering at least half a dozen with the train stationary on the bridge.

OSINT investigators on social media speculated as the cause of the blast, with many dismissing Russian claims.

@CasualArtyFan wrote: “New pictures from the strike show evidence of a top-down blast.

“A train explosion wouldn’t have enough energy to cause the bridge to collapse below it.”

The bridge consists of a rail and road section that spans the Kerch Strait between the Taman Peninsula of Krasnodar Krai in mainland Russia and the Kerch Peninsula of Crimea.

The bridge was built by Russia after it annexed Crimea at the start of the Russo-Ukrainian War.