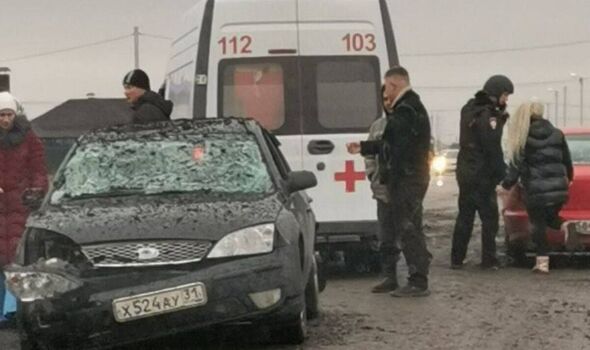 A Ukrainian soldier shot down a Russian cruise missile with nothing but a machine gun.

The remarkable incident happened on Friday, during yet another Russian air assault on cities throughout the country.

“Kipesh”, a Ukrainian Territorial Defence volunteer, was stationed in a small suburb just outside Kyiv, when he spotted the incoming missile.

Using a mounted machine gun, he shot down the rocket, which crashed into a nearby field.

A fellow soldier told the local news outlet Obozrevatel: “When he fired, green sparks went off the missile.

“It started to spin, tilted on its tail and tumbled down.”

The unit’s commander, who goes by the name “Hera”, added: “It’s almost impossible to hit a missile with a machine gun but it was done.”

Rishi Sunak has sparked fears that the UK government may be wavering in its commitment to supply Ukraine with military aid.

It comes as experts warn that the war has entered a critical phase and the ability of each side to rearm will prove crucial to the ultimate outcome.

The Government has until now been steadfast in its support for Ukraine.

The UK is the second largest donor to Kyiv’s war effort, trailing only the US in its willingness to supply weapons.

The Government has committed £2.3billion in military assistance to Ukraine so far and has made a pledge to match that assistance in 2023.

Britain is also hosting a training programme, supported by a number of allies, with the aim of training 10,000 new and existing Ukrainian personnel every 120 days.

However, that commitment to support Kyiv’s war effort against Putin’s Russia could be about to change.