The world-famous attraction, seen as the symbol of the capital, joins the Louvre in closing down.

It will be closed to the public from 9pm this evening.

In a televised address to the nation on Thursday, President Emmanuel Macron announced school closures and urged people to avoid close contact for fear of spreading the virus that has killed 61 people in France and infected almost 3,000.

The closure of the tower comes hours after the Louvre museum shut until further notice after staff voted “almost unanimously” not to remain open.

As the most visited museum in the world, it attracts some 30,000 visitors each day, making it a breed ground for the virus. The Louvre will refund anyone who has purchased advance tickets to its exhibitions.

In a statement The Walt Disney Company said the move was being made “in an abundance of caution”.

The popular tourist resort said the three infected members of staff had no contact with guests. The two latest people to be diagnosed worked in the maintenance team – they have since been isolated at home, Le Parisien reports.

Despite Mr Macron announcing a ban on large gatherings, the resort remained opened because health chiefs dismissed it as a confined space. 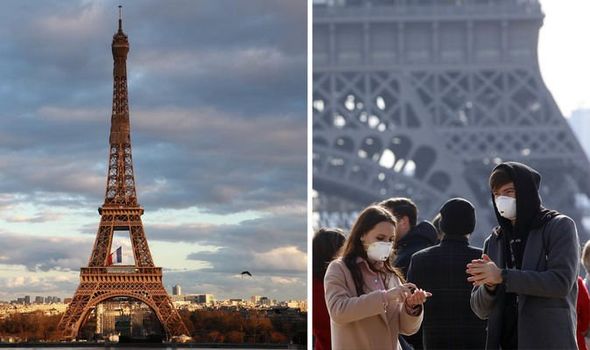 In a statement after the first worker was diagnosed, a Disneyland Paris spokesman said: “We have been notified that a cast member who works backstage and does not have contact with guests has tested positive and is receiving treatment.

“We have been in regular contact with the local health authorities and continue to implement preventive measures in line with their recommendations to help protect our guests and cast members.”

Hotels will remain open to give guests time to make alternative arrangements and will close its doors at the close of business on Sunday, March 15.

The tourist industry has been dented in the City of Light. Rachid Said, who manages the Monsieur Saintonge, a four-star hotel in the Marais district, has seen bookings plummet by 30-40 percent this month. The hotel has slashed its prices in half but there hasn’t been an increase in bookings, he said.

Mr Said told AFP the virus is having a bigger impact on business than the populist yellow vests movement which brought tens of thousands to the streets to protest for economic justice through arson attacks on state buildings and violent marches involving setting bins on fire and lobbing paving stones.

“Tourists are scared to come, and I can understand that.”