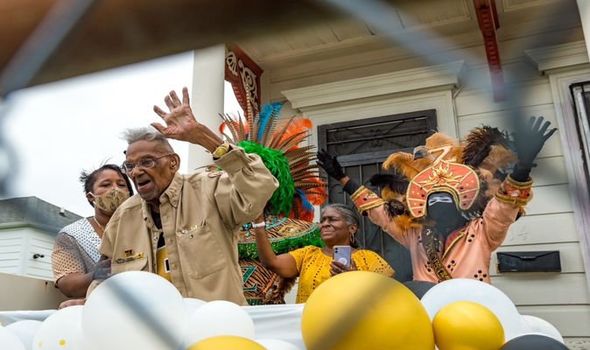 Lawrence was treated to a drive-by, socially distanced birthday party at his home in New Orleans on September 12. The bash was organised by the National WW2 Museum and included a Jeep parade, cake, cards and a musical performance from Mr Brooks’ favourite band, The Victory Belles.

Mr Brooks, born in 1909, served in the predominantly African-American 91st Engineer Battalion, which was stationed in New Guinea and then the Philippines during the Second World War.

A statement from the National WW2 Museum said: “Lawrence Brooks’ birthday is a significant reminder of those who have served and continue to dedicate their lives to our freedom.

“The National WW2 Museum’s ongoing educational mission is to tell the story of the American experience in the war that changed the world so that all generations will understand the price of freedom and be inspired by what they learn.”

“Mr Brooks, the entire state of Louisiana thanks you for your service and we all wish you a joyous birthday.”

In his earlier life he was married to the late Leona Brooks, and is the father of five children and five step-children.

Last year, Mr Brooks received a whopping 21,000 cards from all over the US and abroad wishing him a happy 111th birthday.

The museum has made celebrating his birthday an annual tradition, beginning with his 105th in 2014.

Donald Trump concedes: Statement in FULL as US President stands down for Joe Biden