BBC Weather forecaster Matt Taylor predicted temperatures ranging from between 24C to 27C degrees for most on Thursday, a significant drop to earlier in the week. Despite the slight dip in temperature, Mr Taylor warned that temperatures will rise back up as we enter next week. Outbreaks of rain have also been forecast due to cloudier conditions in Scotland and St Andrew’s. Health alerts have been announced once again, as Britons are being advised to stay hydrated and not spend too much time in the sun without sun cream and a hat.

Mr Taylor said: “Spain is in the grips of one of its longest heatwaves in around 50 years.

“This map shows how temperatures compare to normal, the red colours of course well above where we should be.

“And just watch as I run that through the next few days, we’re going to see those red start to push their way northwards and across mich of France as well.

“Again we could be breaking temperature records and into the start of next week, watch his the UK starts to heat up.

JUST IN: ‘Never been brighter!’ Shock as solar panels save households £600m on energy bills 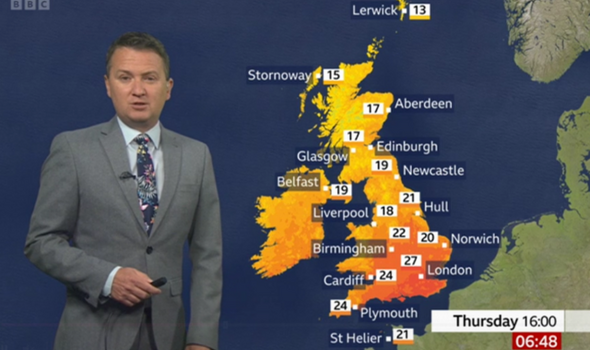 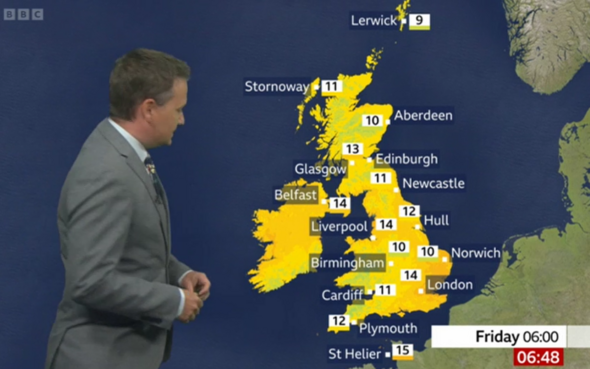 Mr Taylor added: “This is when we will see the peak of the heat here, during Tuesday and Wednesday next week.

“For the time being though, of course, we are a little bit cooler than we were during… I should actually say this is where the extreme heat warning is as well.

“This will be in place but elsewhere we will still see temperatures, in Scotland and Northern Ireland getting close to around 30 degrees.

“Long way off that today, it is less hot across the country at the moment, and a scattering of showers to come for some of you.

“Showers starting in the West, pushing their way Eastwards through the day, could get one or two into the North Midlands maybe East Anglia through the afternoon.

“Further South and West blue skies overhead, not quite as hot in the South as it was yesterday in the previous days but still hot enough in that sunshine.

“24 to 27 degrees, most places high teens, low twenties, down of course from where you’d be at this stage in July. 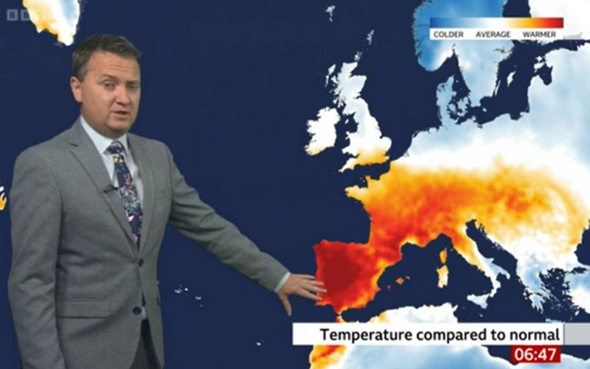 Mr Taylor added: “Showers fade away for a time this evening and then tonight, cloud outbreaks of rain spill into Scotland and Northern Ireland.

“A little bit cooler than recent nights across the South-East corner.

“And the weather chart for Friday shows we got high pressure roughly in charge, but it’s around the top end of that we’re bringing in the cloud which could bring a greater chance of rain to St Andrew’s across Scotland.”

Fight to the death Russian tanks hit in battle for Kyiv