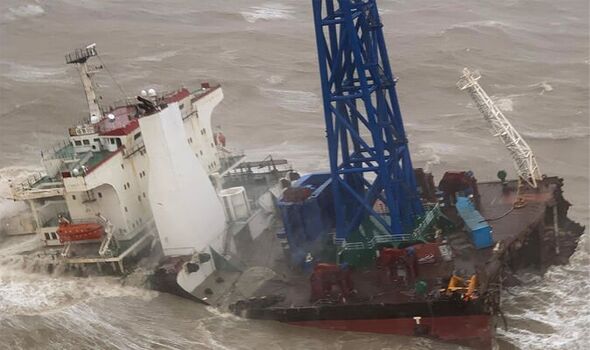 More than two dozen workers on board an industrial support ship are feared to have died after the ship broke in two. A dangerous storm is thought to have caused the ship to break, with planes and helicopters scrambled to the scene in the South China Sea in a bid to look for survivors.

So far only three out of 30 of those onboard the vessel have been safely recovered.

The Hong Kong emergency services sent planes and helicopters to the ship, aiming to rescue as many workers as they could.

According to the Hong Kong Government Flying Service, the vessel was 160 nautical miles (296km) southwest of Hong Kong and “suffered substantial damage and broke into two pieces”.

The origin or name of the ship has not yet been divulged, however, crew were contending with a fierce storm at the time of the wreck.

Tropical Storm Chaba had unleashed winds of 110km/h (68mph) making it very difficult to navigate for the crew.

The three rescued workers said their fellow crew may have been swept away by waves before the first helicopter arrived on scene.

Now rescue services have said they will increase the search area “due to the large number of people missing”.

Emergency services may also search into the night if conditions permit.