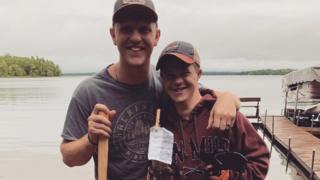 The touching moment a man asked his brother to be his best man at his marriage via a message in a bottle has gone viral.

Will Claussen, 24, staged the treasure hunt for younger brother Henry, which ended with him digging up the note after finding it with his metal detector.

At first Henry, 22, thought the letter might be a prank but after unfurling the paper he leaped into his brother’s arms with joy.

The note read: “You are already the best bro and also the best friend. So will you please say “yes” to being my best man? Love Will.”

In a World with much need for love and positivity, Henry Claussen always comes through ❤️

The video, which was captured by Will’s fiancée AJ Johns, has been watched millions of times.

“It’s surreal; even Khloe Kardashian has shared it on her Twitter feed,” said Will.

Will, who is from Mankato, Minnesota, had been planning the message in a bottle since he proposed to AJ.

“I always knew that Henry was going to be my best man,” said Will, “we have been pretty much inseparable since he was born”.

“I decided to use one of his favourite hobbies, metal detecting, as a way to ask him to be my best man,” continued Will.

Will planned the day so Henry would find the bottle while out with his metal detector at the family’s log cabin by Ten-Mile lake in Hackensack, Northern Minnesota.

“Henry was beginning to worry he was going to get left out of the wedding party – he was so happy when he read the message”.

When asked how he felt about the video going viral Will said it was “crazy” but he was glad that he and his brother had “spread some positivity and happiness”.

AJ and Will, who met at college, have been together for two-and-a-half years and plan to get married next summer.

Boy, 15, ‘sent naked picture of married teacher to friends for a laugh’

While You Were Sleeping: 5 stories you might have missed, Oct 7