Home » World News » Leave the Sweatshirt at Home. Dining Dress Codes Are Back.

A number of restaurants are betting that Americans want to get gussied up again, but not everyone is thrilled about the fashion screening.

If you forget to wear a jacket to Les Trois Chevaux, in the West Village, the management will put you in a vintage Yves Saint Laurent model.Credit…Daniel Krieger for The New York Times

One unusually warm evening in the West Village, while other New Yorkers were outside walking their dogs in sneakers and T-shirts, a family of five sat primly in the front window of a formal dining room, each of them garbed in a stylish blazer. A couple in a velvet corner booth wore suits — his navy, hers powder blue. Pearls gleamed, freshly buffed shoes glowed. When a fashionably dressed couple stopped in momentarily for a peek at the menu, the sight was jarring: They were wearing jeans.

That everyone was in full feather at this restaurant, Les Trois Chevaux, was no coincidence. They had been instructed to do so the previous day in a text message that read like a manifesto.

“At Les Trois Chevaux, we revere the style and finesse that can only be attributed to having New York swagger,” it said. “We expect our guests to arrive in proper dinner attire, and for you to celebrate the style that downtown New York City can bring.”

Lest there be any confusion, details followed: “Blue jeans, shorts and sneakers are strictly prohibited.” Diners were “kindly” requested to wear jackets. For those without a jacket, a vintage Yves Saint Laurent model would be provided. Anything else? “Absolutely no flip-flops,” the owner, Angie Mar, emphasized in an interview.

“Something that I feel tremendously is missing from New York over the past five or six years is that old-school flair that I love,” she said. “It is important that we bring that back.”

During a pandemic in which many Americans have traded their tailored slacks for leisure wear, dress codes are making an unexpected return to the dining room. 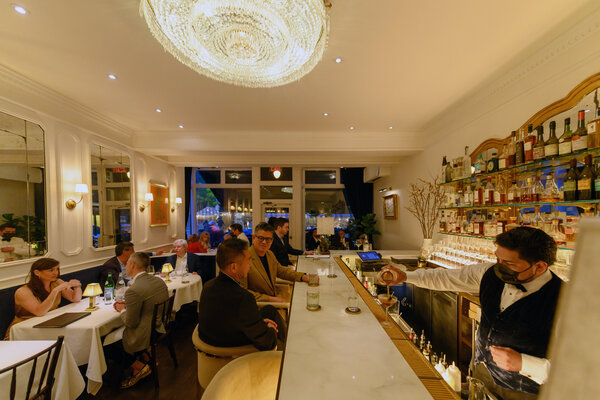 Over the last two years, several new restaurants around the country have opened with policies on expected attire, some stern (“upscale fashionable dress code strongly enforced,” warns a text from Olivetta in Los Angeles) and some vague (“smart casual or better,” advises Catbird in Dallas).

Some are aspirational: “We expect our guests to bring their best,” says Kitchen + Kocktails in Chicago. Others seem to allude to some disturbing prior incident: “Clothing emitting offensive odors is not permitted” at Juliet in Houston.

Whatever the particulars, the calculation is the same — a belief that many diners are eager to dress up again after an epoch of record-level dowdiness.

“Everywhere we went, people were walking around in sweatpants and T-shirts and their hair was not done,” said Rosea Grady, the general manager at Thirteen, a high-end Houston restaurant founded by the professional basketball player James Harden that opened in March 2021. “We wanted Thirteen to be a place where people put their best on.”

A dress code also complements the luxe surroundings, she added. “The building is beautiful. Our wallpaper is from Gucci.”

If all this sounds a bit exclusionary, in some places it’s meant to be. “My restaurants are not for everybody in terms of taste,” said Ms. Mar of Les Trois Chevaux, which opened last July with a menu that runs to lavish dishes like a mille-feuille pastry stuffed with foie gras.

Dress codes may also seem counterintuitive at a time when many diners have reacted angrily to other directives — like requests to wear a face mask — and when even some formal restaurants with longstanding dress rules have loosened them during the pandemic. Eric Ripert, the chef and co-owner of Le Bernardin, in Manhattan, said he dropped a requirement that men wear jackets because sharing the restaurant’s loaner coats seemed unhygienic.

In the last few years, the restaurant business has grappled with issues of equity and inclusion, and dress codes have come under fresh criticism as a covert means of discriminating or treating customers arbitrarily. Last month, the former Atlanta mayor Keisha Lance Bottoms tweeted that she had been turned away from a Capital Grille in that city for wearing leggings, and wondered “if the woman who came in immediately after me, who I did not see come back out, was also denied service.” (The restaurant group said Monday that the woman had come in for takeout, but that its president apologized to Ms. Lance Bottoms, and it had updated the dress code and retrained staff on proper enforcement.)

“Dress signifies a lot of highly contested issues: gender identity and gender roles, race, class, status,” said Richard Thompson Ford, a professor at Stanford Law School and the author of “Dress Codes: How the Laws of Fashion Made History.” “When we can’t really talk about these issues openly, we struggle through proxies, like clothing.”

Some local governments have even stepped in to condemn dress codes. In the summer of 2020, the Baltimore City Council passed a resolution that called on the Atlas Restaurant Group to eliminate its dress code after a Black woman and her son, who was in athletic wear, were denied entry to Ouzo Bay, while a white child dressed similarly was already dining. (The restaurant group apologized and relaxed the code.)

Many restaurateurs point out that their dress policies are broadly worded so they won’t be perceived as racially coded or gender-specific. Some allow more informal clothing like jeans, cropped shirts and miniskirts.

“It is not stuffy,” Kim Walker said of the dress code at her Los Angeles rooftop lounge, Bar Lis. “But it cues people, like, ‘Hey, I am going to go home and get a little dolled up.’”

Plenty of diners don’t mind. Many embrace the opportunity to spruce up.

Priscilla Von Sorella, a fashion designer in Manhattan, said that dressing nicely allows her to express unspoken gratitude for restaurants.

“They have really suffered a lot in the last two years,” she said. “Whenever you enter their establishment, especially if it is a nicer establishment, it is a way to show your token of appreciation and a level of respect.”

Marissa Hermer, an owner of the Los Angeles restaurants Olivetta and Issima, said diners often tell her that the restaurants’ dress requirements make them feel as if they are part of a members-only club.

At Carte Blanche, a tasting-menu restaurant in Dallas where the dress code suggests “polished casual” attire, the chef and co-owner Casey La Rue said that so many guests arrive overdressed that he is considering opening another location with a more formal code.

Clearly, he said, “there are people that want that experience.”

And then there are those who don’t. The musician and record producer William Wittman is still irritated about the time he dined at Patsy’s, an Italian restaurant in Manhattan, one hot summer day in the early 1980s. The air-conditioning wasn’t working, but the staff still insisted that he wear a jacket.

“The idea that this somehow made their dining room classier under those circumstances is just ridiculous,” Mr. Wittman said.

Dress codes remain on the books at many white-tablecloth restaurants. Joel Montaniel, a founder of the reservations system SevenRooms, said that since the pandemic shutdowns he has seen dress guidelines appear more frequently in booking confirmations.

But they are still a rarity. And because most are general suggestions rather than lists of dos and don’ts, the decision about whether a particular diner meets them is often subjective.

Even Ms. Mar, who lays down explicit boundaries at Les Trois Chevaux, acknowledged that they are not uniformly enforced.

“There are rules and then there are rules,” she said. “You know when Tom Fontana comes here, he is a neighborhood regular, he wrote ‘Oz,’ he is a good friend of our house. Tom comes, he forgets a jacket, we will close one eye.”

Flora, a Mexican restaurant in Houston, prohibits gym attire. But an owner, Grant Cooper, said that guests dressed in designer athletic wear, like Lululemon, could be allowed in. “It is about how the person pulls it off a little bit, too,” he said.

At most restaurants, that call is often left to the employee at the front desk. Some hosts said they felt burdened by the responsibility of making quick judgments on people’s outfits.

Julia Yaeger was a host at a traditional French restaurant in Washington, D.C., until last May. The dress code recommended jackets for men, and business or formal wear for women.

“It was really uncomfortable, especially because of the vagueness” of the guidelines, she said. “It sort of felt like no one really knew what it meant.”

She felt particularly uneasy explaining the dress code to nonbinary customers, since it was worded in such a gendered way. When she asked other guests to put a jacket on, some yelled at her.

It’s hard to separate dress codes from their history as a tool of division and control, said Mr. Thompson Ford, the Stanford law professor. While they have existed throughout history, modern versions proliferated in the mid-20th century, when standards of proper public dress began to relax.

Dress codes, he said, were a “filtering device to make certain groups of people feel unwelcome, or to signal that this is not their kind of place.”

Andre M. Perry, a senior fellow at the Brookings Institution in Washington who has written about race and dress codes, is skeptical of today’s restaurant guidelines.

“I am hard-pressed to find a dress code that isn’t fraught, but I don’t want to also say that a restaurant shouldn’t inspire community of a certain kind,” he said. “I just think that how we define ‘community’ often is racist, sexist or homophobic.”

In May 2021, Monica Johnson, who works for the Georgia Department of Behavioral Health and Developmental Disabilities, complained publicly that she had been denied entry to Le Bilboquet, a French bistro in Atlanta, for wearing a track suit, when other diners were dressed more casually. Days later, the former Atlanta Hawks player Dominique Wilkins tweeted that the restaurant had turned him away, saying he didn’t meet the dress code.

“I’ve eaten at some of the greatest restaurants in the world,” he wrote, “but never have I felt prejudice or been turned away because of the color of my skin, until today.” Le Bilboquet denied that it discriminated on any basis; it said it had revised its dress code, which still forbids athletic wear, and trains employees in diversity, equity and inclusion.

Ms. Johnson says she is not opposed to dress codes. “I just want them to be applied fairly,” she said.

James McGhee, the owner of Juliet, in Houston, said he had experienced discrimination at bars in the city that ban attire like Air Jordans “to deter Black people from coming.” But he has imposed his own dress code, which encourages “upscale attire,” with no gender-specific requirements. Mr. McGhee said he trains employees to respect different interpretations of “upscale,” including sneakers.

Some new restaurants proudly proclaim that they don’t tell diners what to wear.

“We did want to have it be more accessible to all,” said Jennifer Tran, who opened Jeong, a Korean restaurant in Chicago, in 2019 with her partner, Dave Park. People often call asking if there is a dress code. “It is always nice to be able to tell them, ‘No, feel free to come as you are.’”

But there are drawbacks to that choice. Ms. Tran believes that a dress code is an unspoken criterion for restaurants that aspire to earn Michelin stars.

In certain circles, a dress code will always matter, she said. You just have to decide if you are fine being outside them.

Prince William shouted ‘The King is in the house’ in DJ set, Kate’s uncle claims