LONDON (Reuters) – Britain may need to impose curfews and travel restrictions to halt the spread of the coronavirus if people do not heed the government’s advice on social distancing, Prime Minister Boris Johnson warned on Sunday. 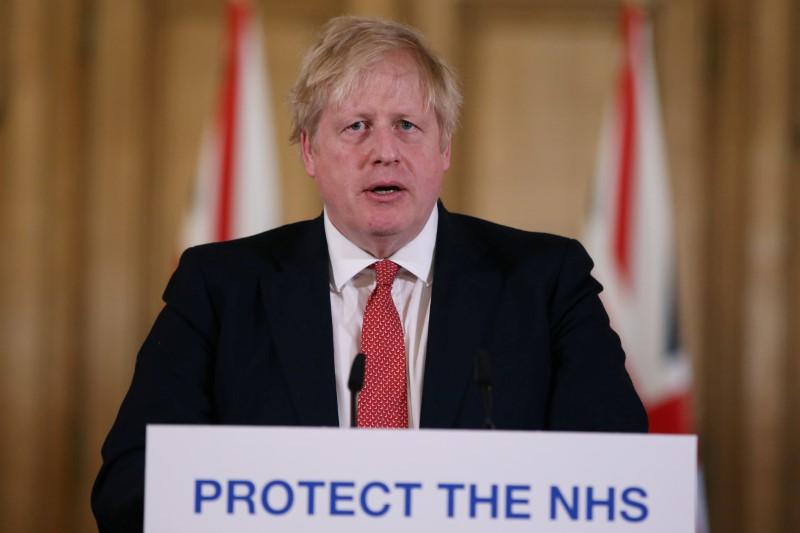 Pubs, clubs and gyms have already closed, but social media on Sunday was awash with pictures of people congregating in parks and food markets, apparently ignoring advice to stay two metres apart.

Parks in London are already closing down as authorities struggle to slow the advance of coronavirus through the population, the biggest public health crisis since the influenza pandemic of 1918.

So far 281 Britons have died from coronavirus. The spiralling number of infections means Johnson is in a race against time to prevent a repeat of the tragedy in other countries, including Italy where the death toll reached 5,476 on Sunday.

Johnson was blunt as he delivered his message to the public.

“Stay two metres apart. It’s not such a difficult thing. Do it,” he said.

“Otherwise…. there is going to be no doubt that we will have to bring forward further measures and we are certainly keeping that under constant review.”

Johnson said tougher measures such as curfews needed to be timed right for maximum impact.

“After all, when the epidemic is hardly spreading at all that’s not the moment to impose curfews and prohibitions on movement and so on and so forth,” he said.

“You’ve got to wait until, alas, it’s the right moment to do it and that’s always been how we’ve been guided.”

In another sign of the times, McDonald’s Corp (MCD.N) announced on Sunday it will temporary shut all of its more than 1,300 restaurants in Britain and Ireland by Monday evening.

“This is not a decision we are taking lightly, but one made with the well-being and safety of our employees in mind as well as the best interests of our customers,” the company said in a statement on Twitter titled “See you soon.”

The latest official statistics show the number of confirmed coronavirus cases in Britain rose to 5,683 on Sunday, up from 5,018 on Saturday.

Speaking alongside Johnson, communities minister Robert Jenrick said the government will write to 1.5 million of its most vulnerable citizens to demand they stay at home for the next 12 weeks to shield themselves from the virus.

Senior doctors in Britain are already thinking about how they may need to ration critical care beds and ventilators if resources fall short.

Johnson, who has asked British manufacturers to produce ventilators for coronavirus sufferers at short notice, said “far, far more” would be needed.

Britain said on Friday that engineering companies had come up with an emergency ventilator prototype to treat coronavirus patients that could be approved next week, though one industry source told Reuters full production was several weeks away.

Around 12% of adult critical care beds in hospitals in England are occupied by patients with COVID-19, England’s deputy chief medical officer, Jenny Harries, said while speaking alongside Johnson.

“That will change drastically as we go through the epidemic,” she added.

Iran denies U.S. seizure of Iranian arms on way to Houthis in Yemen