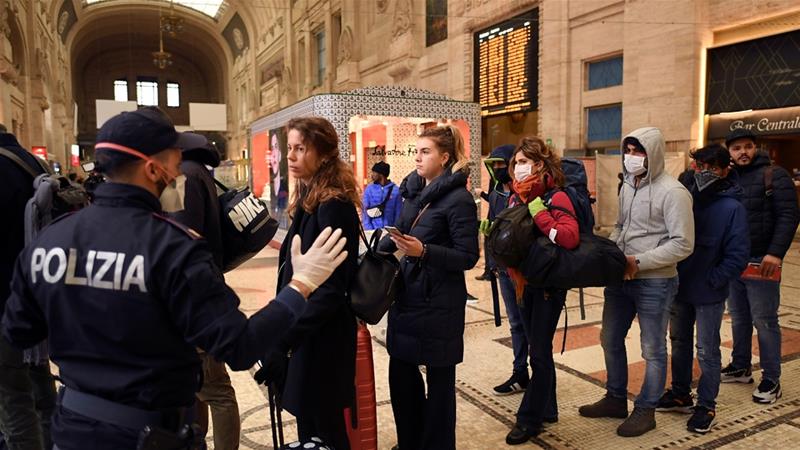 Artists, doctors and politicians in Italy have thrown their weight behind the government’s drastic measures to combat the new coronavirus, calling on their social media followers to abide by an extraordinary lockdown in the country’s north.

“Let’s follow the rules,” tweeted the famous pop singer, Ferro, posting a video of himself recording music in his house.

Italy has put the entire region of Lombardy, home to the financial hub of Milan, and 14 other central and northern provinces, including the tourist hot spot of Venice, under quarantine.

The move came as the country’s death toll from the virus jumped from 366 on Sunday to 463 on Monday, according to the country’s civil protection agency.

Italy is the worst-hit country after China, with 9,172 confirmed cases of coronavirus detected so far.

Restrictions to prevent the spread of the virus are not limited to those living within the so-called “red zones”. The government has also asked people in the rest of the country to respect rules or risk up to three months in jail.

The new rules include the imposition of a metre (3.3 feet) of distance between customers in bars and pubs, the closure of all museums, cinemas and theatres, and suspension of civil ceremonies, including funerals.

“We understand that these measures will require sacrifices, but this is self-responsibility,” Conte told reporters on Sunday. “We must not try and be clever.”

However, his words seem to have fallen on deaf ears in some areas.

A few hours after the rules came into effect, beaches in the coastal region of Liguria were crowded, tickets for most of the trains departing from Milan to southern cities were sold out, and squares of the Roman capital were filled with young students having a drink.

Doctors on the front line fighting the virus snapped back angrily on social media.

“You need to stay home!” Barbara Balanzoni said in one of her daily Facebook videos that went viral.

“There are too many people around,” she insisted, adding that hospitals do not have enough resources to handle a higher number of infected cases.

Antonio Pesenti, head of the crisis response unit in Lombardy – the region worst hit in Italy – was also cited by local media as saying the health system there was “a step away from collapse”.

The coronavirus social media campaign is targeting the younger generation, which many have said seems less inclined to follow the rules, especially now that all schools and universities are closed.

“Schools are closed not because there’s a holiday, but because there is an emergency,” said singer, rapper and songwriter Lorenzo Cherubini, commonly known as Jovanotti, in an Instagram video.

Politicians such as Dario Franceschini, Italy’s culture minister, also joined the social media chorus. In a tweet, he thanked the “many protagonists of music, cinema, and show business who are in these hours promoting the #IStayHome campaign”.

Some Italians felt the government should push for even tougher measures. “We should close all activities, the shops, everything besides essential services […] as if the country was on holidays” tweeted Giorgio Gori, the major of Bergamo, a town under quarantine.