Iran: Smoke plumes appear to rise from ship on Gulf of Oman

A blaze broke out on board the Kharg during a training exercise near the port of Jask, Iranian news agencies have reported.

The entire crew were able to safely disembark the huge vessel before firefighters battled to tackle the fire.

The Fars news agency reported: “All efforts to save the vessel were unsuccessful and it sank.”

The statement said efforts to extinguish the flames continued on the huge ship, which was near the Iranian port of Jask situated on the Gulf of Oman at the time of the disaster.

But the cause of the fire has not yet been revealed.

A Government spokesman told the Tasnim news agency that at the time of the fire, the ship had around 400 crew and students on board.

Some 20 people received minor burn injuries before the ship was evacuated. Nobody was seriously hurt. 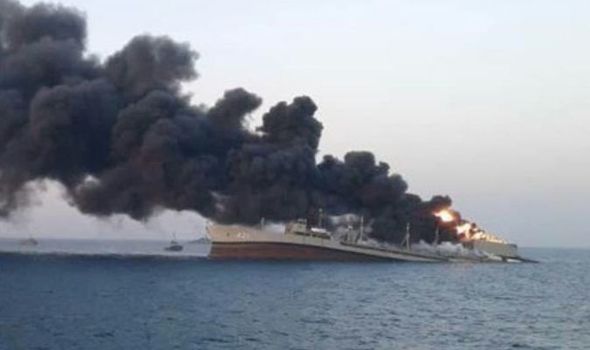 The spokesman added the cause of the fire remains under investigation.

The Kharg, which Iranian news agencies have described as a “training ship”, is one of a handful of vessels belonging to the country’s navy that can provide replenishment at sea for its other ships.

The huge vessels can also lift heavy cargo and serve as a launch point for helicopters.

The Kharg was built in Britain and launched in 1977.