BEIJING (Reuters) – As schools reopened in China after the COVID-19 outbreak, they have thrown themselves into a nationwide exercise to remove books deemed politically incorrect, deepening Chinese President Xi Jinping’s push to instil patriotism and ideological purity in the education system. A directive from the Ministry of Education last October called on elementary and middle schools to clear out books from their libraries including “illegal” and “inappropriate” works. Now teachers have removed books from schools in at least 30 of mainland China’s 33 provinces and municipalities, according to a Reuters review of social media posts, publicly available school and local government documents, and interviews with teachers.

From western Gansu province to Shanghai, the review of publicly announced measures pointed to books being cleared by the hundreds of thousands.

Censorship in China has been intensifying under Xi, but analysts say this is the first national campaign aimed at libraries in decades. It comes as government employees in Hong Kong last week removed books by pro-democracy activists from public libraries to see whether they violate a new national security law.

“This is the first movement targeted at libraries since the Cultural Revolution,” said Wu Qiang, a political analyst based in Beijing and former political science lecturer at Tsinghua University. In the late 1960s, zealous teenagers driven by Mao Zedong carried out a nationwide campaign targeting libraries and destroying or burning what they could get their hands on, as part of a wider destruction of traditional culture.

This campaign is more selective, and directed from the top, with schools putting groups of teachers in charge of interpreting the order. The books removed have mainly been out-of-date, shabby or pirated texts, but the drive has also covered those which, while they may be legally available, are sensitive.

The ministry directive did not list titles, but said illegal books are those “that damage the unity of the country, sovereignty or its territory; books that upset society’s order and damage societal stability; books that violate the Party’s guidelines and policies, smear or defame the Party, the country’s leaders and heroes.”

Inappropriate books are “not in line with the socialist core values; that have deviant world views, life views and values” or are books “promoting religious doctrines and canons; promoting narrow nationalism and racism.”

Neither the Ministry of Education nor the State Council Information Office, which acts as a spokesperson for the central government, responded to requests for comment.

One middle-school teacher in a rural area told Reuters their school had removed traditional comic-like picture books called lianhuanhua, or “linked images,” popular in China until the 1990s; books about Christianity; books about Buddhism; and notably, copies of “Animal Farm” and “1984” – George Orwell’s classic novels about authoritarianism which have been available in China for decades.

The teacher, speaking on condition of anonymity, said a small group of staff were led by their librarian in an after-hours operation in late April to inspect and remove the books.

Each night in sessions of up to five or six hours over seven days, they flicked through thousands of titles, selected about 100 that met guidelines issued by the local government and removed them, filling in a form to report their actions.

“Of course, these books, the students don’t really look at them anyway,” the teacher said. “So if we had to get rid of some, we would start with this.”

Some schools and counties have taken to social media such as Weibo, China’s Twitter-like platform that is subject to official censorship, to broadcast their participation.

“Book inspection and clean-up is meticulous but tedious work, shouldering the heavy responsibility of watering the flowers of the motherland,” announced a Weibo post in May by Xianlai school in Jiangxi province, above a picture of a woman in a floral dress sorting books on a shelf.

“Our school has taken concrete action to cultivate a virtuous youth, and has raised the quality of our library books one step further.”

The Xianlai school principal did not answer a phone call from Reuters.

School phone numbers are not publicly available in China.

Reuters tried to call more than 100 other schools across the country to inquire about the removal campaign; 44 of the numbers were functioning. Of those, officials at 23 declined to comment or hung up. There was no response from the rest.

It is unclear how the books will be disposed of, teachers say. For now, they have been sealed up and put into local storage.

The titles are being replaced with new books from a 422-page list published in the directive by the Ministry of Education. Suggestions include the “Communist Manifesto and the new era,” the poems of Mao Zedong, and “Uncle Tom’s Cabin,” the influential 19th-century abolitionist novel of slavery in America.

Censorship in China is a continuously shifting line. One of the books on the approved list is “Winnie the Pooh,” the children’s classic about a boy and his teddy bear. In the past, online posts that likened Pooh’s appearance to that of President Xi have been censored, and in 2018, China turned down Walt Disney Co’s request to allow screenings of a movie featuring Pooh.

Xi, who came to power in 2012, has led a campaign to strengthen the Communist Party and reaffirm its ideology. In 2013, the Party issued a directive known as Document No. 9, naming seven ideological perils from the West that were endangering Chinese society, including terms such as “universal values,” “constitutionalism,” “civil society,” and “democratic politics,” that had become more commonly used and debated in China.

At a national summit on education in 2018, Xi spoke of the challenges facing education in the country and issued nine resolutions to tackle them.

First, according to a summary of his speech published in a Party journal, he said the nation should “deeply understand and strengthen the fundamental requirement for the Party’s total leadership of education.”

Initially, universities were the focus: Since 2017, many higher education institutions have been tasked with placing Xi’s ideology, which he has branded “Xi Jinping Thought,” at the core of their curricula, and the government has tasked universities to start research centres for it.

Later, the drive broadened to younger minds. In 2018, the government launched a campaign to expunge unapproved foreign content from compulsory education textbooks used in the first nine years of school.

The ministry’s notice from October called on schools to carry out an “inspection and cleaning programme” of books. It said three types should be rejected: illegal books, inappropriate books and books with poor appearance or no value.

It also called on schools to perfect a mechanism of managing a library’s catalogue so any incoming book is inspected. If a problem arises, both the person who recommends the book to students and the one who decides to use it must be held responsible, it said.

“Contending for the youth’s brains is one of the most important things for the Party,” said Wu, the political analyst in Beijing.

Young protesters in Hong Kong last year have shown why China is so determined to keep a tight control of the education of young people.

People’s Daily, the Communist Party’s official newspaper, has said Hong Kong’s education was “poisoned.” State media has run multiple editorials in recent months attacking the city’s tradition of civic education. The party, said Sun Peidong, a professor with Shanghai’s Fudan University, thinks: “why that protest happened so brutally is because of the lack of patriotic education in Hong Kong.”

The western province of Gansu was among the first to remove offending material.

In December, a picture of two women burning books in front of a library in Zhenyuan, a small Gansu county, went viral online. The book-burning incited public criticism on Weibo.

Some posts said China was “burning books and burying Confucian scholars,” an edict supposedly issued by China’s first emperor, Qin Shihuang, more than 2,000 years ago to destroy works he regarded as politically dangerous.

Gansu had issued a province-wide notice to follow the Ministry of Education’s directive in late October, but Reuters could not determine if the Gansu librarians were part of the campaign targeting schools. The county government said at the time that by burning the books, the women had not followed regulations.

Schools have not boasted of book burnings since. But schools and local governments in four regions publicly stated how many books they removed, totalling more than 60,000 for that small sample, Reuters found.

Anning city in southwestern Yunnan province removed a total of 16,365 volumes, including 1,835 “inappropriate” volumes and 14,530 books that were “of poor appearance or had no value,” according to a social media post by the local government.

In the city of Zhoushan, near Shanghai, 100 schools cleaned out 11,871 books that had “old and outdated content that is not suitable for students to read, or had a poor appearance and no preservation value,” according to an education periodical published by the provincial government.

In Xixia county, in central Henan province, schools cleaned out a total of 6,000 books that were “inappropriate or had a poor outer appearance,” and 22,700 that had no value, local media reported.

Many school libraries, especially in rural areas, are small and do not have many sensitive books, teachers say. However, their shelves are often filled with old or pirated books.

Some of these were falling apart, one teacher in Gansu province said. His school in a rural village removed about 80 volumes. After completing the work, he said, they put the books away in storage.

Although “1984” and “Animal Farm” were removed from a rural school, they are still available from stores and online in China.

The school clear-out also has included lianhuanhua picture books from the time of the Cultural Revolution, the rural teacher said.

At one stage, the comic books from that era engaged in political criticism, targeting figures like Mao’s rivals and Confucius, whose writings Xi has resurrected. But the Cultural Revolution has become a more sensitive subject in recent years. 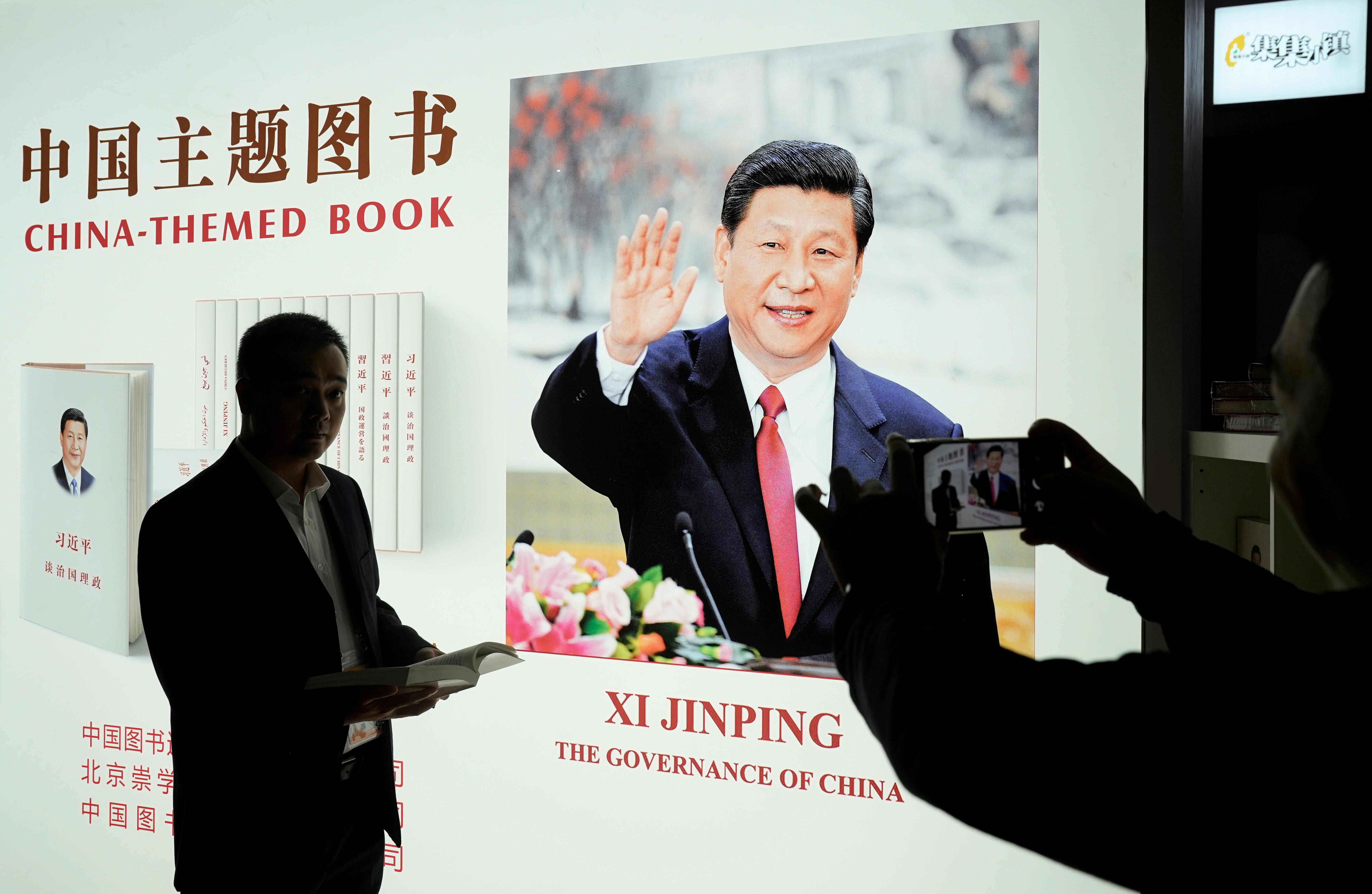 For instance the Fudan University professor Sun, an expert on the history of the period who now lives in Paris, said she has faced increasing censorship since 2015. In 2019, she stopped teaching her long-time class about the era and quit the history department.

The authorities “don’t want the ordinary people of China, especially the younger generation of China to know” about it, Sun said.