Home » World News » Hotter than the Algarve!: Temperature to reach 90F in the UK 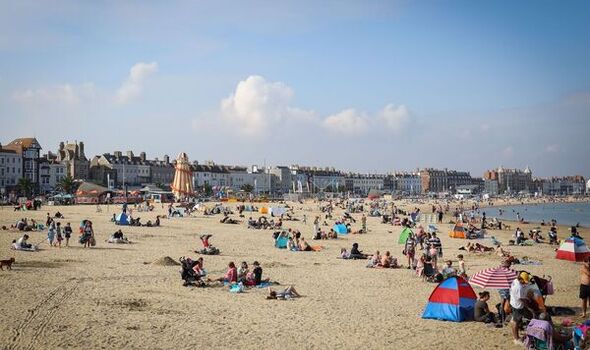 Anyone who has given up hope of a holiday in Europe because of the travel chaos will be pleased to know that is hotter than the Algarve in Portugal.

Forecasters said the damp and slightly chilly summer would receive a blast of heat as a “Spanish plume” of air moves up from the Continent.

Many enjoyed warm sunshine at the weekend, but much hotter conditions will start to move in from today and they are set to last at least into next week.

High-pressure systems over North Africa have been moving northward into southern Europe in recent days, resulting in parts of Spain peaking at 104F (40C).

The Met Office said the hot conditions would now move further North, bringing the UK the “unusually warm spell” in the coming week.

Temperatures are expected to hit 86F in the south as t early as Wednesday, with most of the country also enjoying long spells of warm sunshine during the week.

The Algarve, by contrast, is expected to struggle towards 79F.

But the hot UK conditions of 90F by Saturday could also spark thunderstorms.

The Met Office’s Aidan McGivern said: “Heat is building across Spain and that pushes into France and the northern edge of that starts to influence the UK.

“As well as that, there is some instability on the northern edge so there is the potential for some thunderstorms.”

But other forecasters say temperatures could climb even higher.

The latest prediction from online service Netweather was that the impending mini-heatwave will mean UK temperatures peaking at around 97F in the South-east, with Sussex, Kent, Surrey and London enjoying the best of the sunshine.

Netweather’s Jo Farrow said: “There are signs the warmth could last from Wednesday through until Saturday, if the push of fresher air from a low to the North takes its time to shove the warm plume away from the UK eastwards.”

Those travelling to Spain are being warned to prepare for the extreme heat of 109F in Cordoba and Seville in the south.

How disturbing TikTok videos could be warping kids’ developing brains

Psychological autopsy to be conducted on gunman of Nova Scotia mass shooting: RCMP

Covid 19 coronavirus: A year after Wuhan, China tells a tale of triumph (and no mistakes)