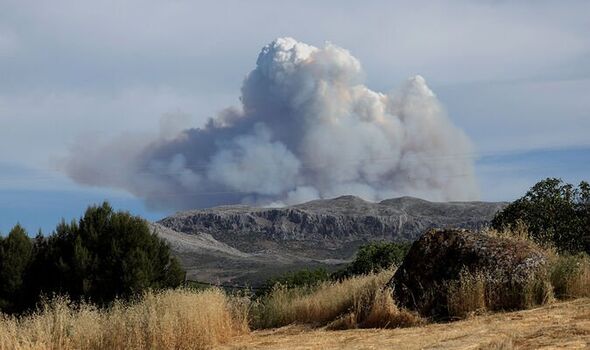 The entire village of Benahavis near Marbella was evacuated by police on Wednesday night as well as several nearby residential estates including upmarket Montemayor, which is popular with British expats and holiday homeowners. Firefighters are tackling the wildfire, which broke out in Valle del Genal south of Ronda, in the Pujerra municipality and remains “out of control”.

It has already burned through nearly 5,000 acres of land as local officials declared a level two emergency.

The army has also been brought in to help fire crews.But high temperatures and strong winds of up to 25mph have made efforts to control the fire difficult, with officials saying flames are spreading at a rapid rate of 30 metres per minute.

Three firefighters have already been injured, with one seriously hurt after suffering burns to 25 per cent of his body.

It is hoped a predicted change in the direction of the wind in the coming hours is expected to improve the situation.

Around 3,000 people have been evacuated so far, with many sleeping overnight in their cars.

British tourists have been put up in emergency town hall accommodation in nearby San Pedro de Alcantara on the coast.

Torre Tremores, the exclusive villa on the outskirts of Benahavis where Prime Minister Boris Johnson stayed last year on a family holiday, is also thought to have been evacuated as the blaze continues to spread.

Civil Guard officers said the road to Benahavis from the coast had been closed and no one was being allowed to enter the village.

Benahavis, which is home to around 8,000 people, was being described as a “ghost town”, according to local reports.

The residential estate of Montemayor was also evacuated after the wildfire started further north in Pujerra.

Civil Guard officers drove around the village using their speakers to order locals and holidaymakers to collect their belongings and leave the area as well as going door-to-door on foot.Residents and tourists were ordered to leave restaurant terraces where they had been eating before owners closed up and left town.

The blaze comes after devastating wildfires raged through the hills behind Estepona near San Pedro for six days in September last year.

The Sierra Bermeja wildfire led to more than 3,000 people being evacuated from their homes.Firefighter Carlos Martinez Haro, 44, a father of two young daughters, died battling the flames.

BBC Weather: Siberian freeze to unleash blizzard across UK amid Beast from the East fears