LONDON (Reuters) – British supermarkets are expecting to get police support to deter unruly behavior if London goes into lockdown to contain the coronavirus outbreak, according to an industry source. 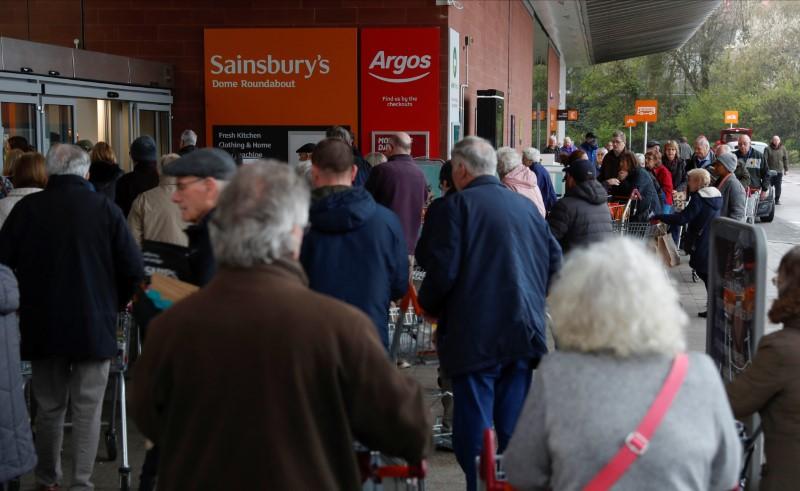 However, the pleas have fallen on deaf ears, with demand increasing and stores being stripped bare of food.

There were rowdy scenes, fights and scuffles in some supermarkets on Thursday as British shoppers sought to buy basic items such as toilet paper, bottled water and tinned goods ahead of an expected toughening of measures by the UK government.

On Wednesday the major supermarkets limited purchases of all food products in an attempt to stem the stockpiling.

All have also beefed up their private security measures.

A spokesman for the National Police Chiefs Council said no national decision had yet been made on providing staffing at supermarkets.

“We plan and prepare for every eventuality, as the public would expect their police service to do,” he said.

“We do not expect food shortages or looting. In fact, the experience of other countries suggest this is highly unlikely to be an issue.”

“Obviously we’ll deal with issues as they arise, and that’s not to say that there won’t be isolated incidents that we have to respond to.”

A police source said one issue with having officers stationed at supermarkets was exposing them to the virus themselves from the large numbers of people visiting the stores.

The industry source also said they did not expect the army to be involved.

“Maintenance of public order is the responsibility of the police, and there are no plans to use military personnel for public order during the coronavirus pandemic,” a spokesman for Prime Minister Boris Johnson said.

Biden to Restore Protections for Tongass National Forest in Alaska