A former US marine living in Kyiv narrowly avoided being hit by a Russian strike which landed near the park where he walks his dog. The atmosphere in the Ukrainian capital is tense following yesterday’s bombardment, during which civilian infrastructure was targeted as well as busy thoroughfares.

The strike, which landed adjacent to Taras Shevchenko National University on a busy commuting route in Kyiv, didn’t appear to target any military site. It landed where former US marine John Sennett walks his dog.

Speaking to Express.co.uk, he said: “It hit around 600 metres (650 yards) from our flat. I was behind schedule today – if I had been walking my dog 15 minutes earlier I would have got hit. Or my wife would have.”

The strike hit Volodymyrska Street, a major thoroughfare that would have been packed with those making their morning commute. It is adjacent to a park which is a gathering point in the area.

Mr Sennett said: “The park is full, these old guys playing chess, there’s a bunch of those outdoor chess tables there. And there’s a big playground and there’s a Ukrainian restaurant right in the middle of the park, and then people out walking their dogs all around that whole area.

“Then the main thoroughfare, which is Volodymyrska Street, goes right in front of that, and that’s where the missile hit. That takes you up to St. Sophia and it’s a big, big, big pedestrian area. It’s a huge pedestrian area, it’s a huge rush hour area.” 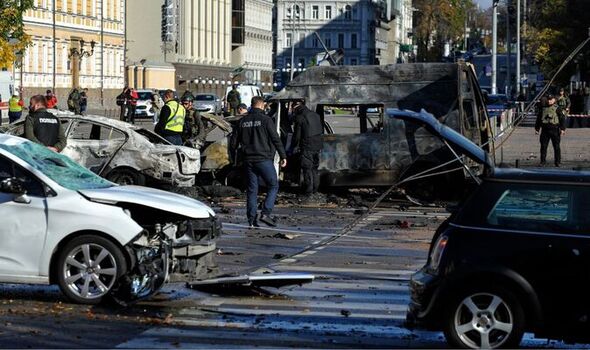 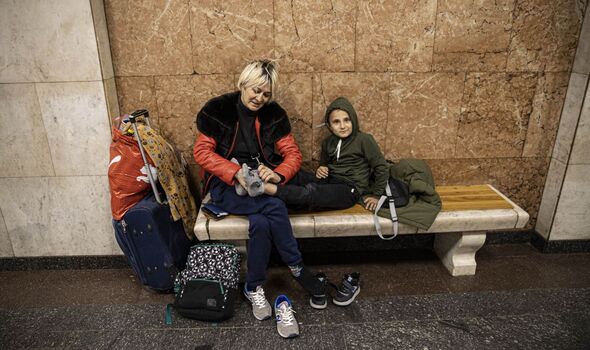 When Mr Sennett arrived at the scene of the attack, he witnessed the carnage that the bomb had wrought. Cars were damaged and destroyed, and he believes some contained bodies.

He said: “I was walking my dog towards the area and then there was smoke and fire and emergency services.

“They pulled this one car up and they covered the windows so there were obviously bodies in there – they just didn’t want people gawking at them. They were just beginning to put out the fire when I got there – one car looked like it got a direct hit.

“It was just engulfed, it was charred. There were apparently [also] bodies on the street, I didn’t see those because the police had begun moving people back.”

Mr Sennett said that the attack was typical as far as Moscow’s tactics go. The mid morning strikes – when streets are crowded with people going to work – have become a “pattern”.

He added: “They have this sort of pattern of striking in the early morning. So we’re expecting that maybe they’re gonna hit us again tomorrow morning. I don’t know if this was just a one off or if it’s a continued thing.”

This morning, air raid sirens were sounded in major Ukrainian cities prior to rush hour. One person was confirmed dead due to new strikes on Tuesday morning in the southern region of Zaporizhzhia. It’s unclear whether there had been sustained strikes in other cities so far today. 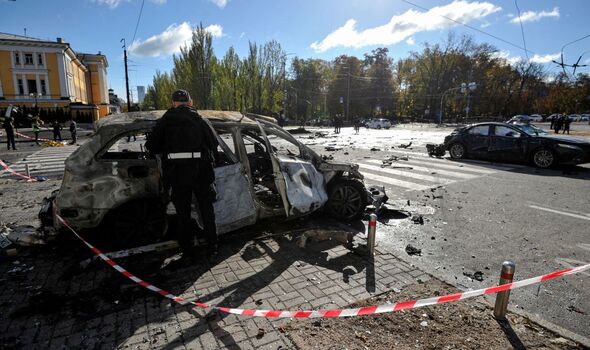 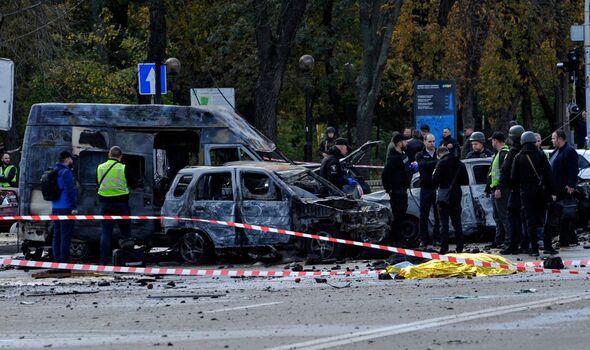 Mr Sennett moved to Kyiv with his wife in November 2020 to be closer to her parents who live in neighbouring Belarus. The couple have stayed in Kyiv since the February 24 invasion and had plans to weather the storm.

However, as things in the capital have once again become tense, Mr Sennett and his wife are waiting to see what happens over the next few days and weeks. They may head to western Ukraine.

He said: “My wife is a lot more upset this time than she was when they attacked on February 24 – it’s a lot closer to home at this point. We’re gonna see what develops over the next couple of days. And we may go out to Western Ukraine.”

For now, Mr Sennett and his wife have stocked up on tinned goods and water. He said that he currently had power in his flat, although authorities have urged residents not to use large appliances. He had access to water and gas as of yesterday evening.

The strikes come as an apparent revenge attack for an explosion which badly damaged the Kerch bridge linking mainland Russia with Crimea. 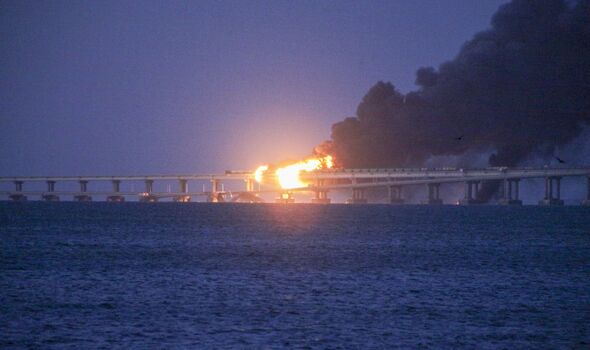 Kyiv has not claimed responsibility for the attack but Ukrainian leaders lauded the strike. The bridge was a pet project of Vladimir Putin’s and damaging or destroying it would be both a symbolic and strategic victory for Ukraine.

The strikes by Moscow are an escalation in a war which seems to be picking up pace following months of artillery battles with little movement on the frontlines.

The situation is now more fluid, with Ukraine recapturing huge swathes of territory in Kharkiv Oblast in the northeast and making progress on the southern front in Kherson. Kyiv seems to have the momentum while Russian forces are on the backfoot.

As Putin’s troops are pushed back, he faces mounting domestic pressure at home. This means strikes against civilian infrastructure and even civilians themselves become more common in Ukraine.

However, some analysts have said Russia’s supply situation is so bad that Moscow may be actually running out of missiles to fire in Ukraine.

Indeed, several of the strikes were carried out by missiles not fit for the purpose. Missiles meant to be used against large ships like aircraft carriers were instead fired at cities while surface-to-air weaponry has reportedly been used against ground targets.

It has been reported that at least 19 people have died due to the attacks as of this morning, with over 100 wounded.

Brit coronavirus panic buying out of control with fighting in supermarkets