EU says must do ‘utmost’ to protect citizens from virus, as Italy reports more than 2,500 have died from COVID-19. 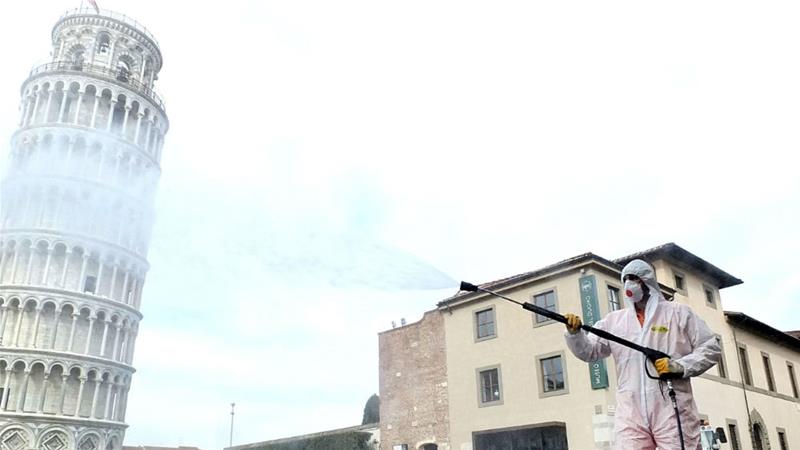 The European Union has moved to seal off its external borders in a bid to curb the spread of the coronavirus in the area that has now become the centre of the pandemic.

The move came as hard-hit Italy reported an additional 345 people had died from the virus, bringing its death toll to 2,503, and France imposed a draconian lockdown unseen during peacetime.

“The enemy is the virus and now we have to do our utmost to protect our people and to protect our economies,” European Commission President Ursula von der Leyen said after the grouping held its second video conference in a week.

“We are ready to do everything that is required. We will not hesitate to take additional measures as the situation evolves.”

In the United States, meanwhile, the virus has been reported in West Virginia for the first time, meaning it has now spread to all 50 states. The Trump administration announced a plan to send money to Americans immediately to ease the economic pain resulting from the outbreak.

In other developments on Tuesday:

Italy’s total number of cases rose 12.6 percent to 31,506 – the slowest rate of increase since the first cases were reported on February 21.

Iran, with a death toll of 853 and 14,991 confirmed cases, has temporarily freed about 85,000 prisoners, including those held for political reasons.

The World Health Organization (WHO) has described the coronavirus pandemic as the “defining global health crisis of our time”, and urged countries to test all suspected cases of COVID-19.

Globally, the virus has infected 184,976 people and killed just more than 7,500, according to the WHO. Almost 80,000 people have recovered from the infection, according to data collected by Johns Hopkins University.

Here are all the latest updates:

04:25 GMT – WHO calls on Southeast Asia to take “aggressive” action on virus

The WHO has called on Southeast Asia to take “aggressive” action to combat the coronavirus, warning some countries were heading towards community transmission of the disease, which could overwhelm already weal public health care systems.

“We need to immediately scale up all efforts to prevent the virus from infecting more people,” said Poonam Khetrapal Singh, WHO’s regional director.

“More clusters of virus transmission are being confirmed. While this is an indication of an alert and effective surveillance, it also puts the spotlight on the need for more aggressive and whole of society efforts to prevent further spread of COVID-19,” she said.

“We clearly need to do more, and urgently.”

New Zealand has confirmed eight new cases of coronavirus, all related to people who had recently travelled overseas, the health ministry said in a news conference on Wednesday.

The new cases take the total number of confirmed COVID-19 cases in the country to 20.

New Zealand implemented tough border restrictions on Saturday asking everyone arriving in the country to self-isolate and has banned big public gatherings.

03:15 GMT – Hong Kong to order all international arrivals into quarantine

Hong Kong will start issuing orders for 14-day compulsory quarantine to all people arriving in Hong Kong from overseas, regardless of whether they are Hong Kong residents.

The measure comes into effect on 19 March.

03:10 GMT – Colombia turns to mass home isolation for the elderly

The measure will come into effect on Friday.

The United Kingdom has also been considering whether to ask the elderly, who are more at risk from the virus, to stay at home.

Brazil will seek authorisation for a state of emergency to allow it to scrap fiscal targets and free up funds to combat the coronavirus crisis, the government said on Tuesday, as President Jair Bolsonaro announced his second COVID-19 test was negative.

In a statement from the presidency, the government said it will ask Congress to authorise state of emergency measures until December 31.

Brazil reported the country’s first confirmed death from the outbreak on Tuesday.

“In view of the permanent monitoring of the COVID-19 pandemic, the need to increase public spending to protect the health and jobs of Brazilians and the prospect of falling revenues, the Federal Government will request the National Congress to recognize the state of emergency,” the statement from the president’s office said.

Australian Prime Minister Scott Morrison has declared a “human biosecurity emergency”, giving the government the power to close off cities or regions, impose curfews and order people to quarantine, if seen as necessary to contain the spread of the virus.

Official travel advice, as we reported earlier, has been raised to an unprecedented “Level 4: Do not travel” to any country in the world. Any non-essential indoor gatherings of more than 100 people have also been banned.

“Life is changing in Australia, as it is changing all around the world,” Morrison said during a televised news conference. “Life is going to continue to change, as we deal with the global coronavirus. This is a once-in-a-hundred-year-type event.”

Researchers at Australia’s Peter Doherty Institute for Infection and Immunity have mapped the immune system response of one of the first people to get COVID-19 in Australia, to find out more about the way in which the body fights the infection.

They took samples from an otherwise healthy woman in her 40s who’d been diagnosed with a mild-to-moderate case of the disease, to track her body’s response over time.

“Three days after the patient was admitted, we saw large populations of several immune cells, which are often a tell-tale sign of recovery during seasonal influenza infection, so we predicted that the patient would recover in three days, which is what happened,” said University of Melbourne Research Fellow Oanh Nguyen.

“We showed that even though COVID-19 is caused by a new virus, in an otherwise healthy person, a robust immune response across different cell types was associated with clinical recovery, similar to what we see in influenza,” added Katherine Kedzierska, a professor at the University of Melbourne.

“This is an incredible step forward in understanding what drives recovery of COVID-19. People can use our methods to understand the immune responses in larger COVID-19 cohorts, and also understand what’s lacking in those who have fatal outcomes.”

The paper has been published in NatureMedicine, a medical journal.

Researchers from the National Institute of Infectious Diseases in Tokyo have released a preliminary investigation into the coronavirus outbreak on board the Diamond Princess.

The cruise ship, with 3,700 passengers and crew, was quarantined off the port of Yokohama for a month from February 3 after a passenger who got off in Hong Kong was confirmed with COVID-19.

The report focuses on the 20 cases confirmed among the crew, finding that transmission from passengers to staff had started before the ship was put into quarantine. Most of those who got the infection worked in food service for the crew and also passed it on to those who shared their cabin.

The report’s authors said the findings indicated the need for a “swift” investigation as soon as a COVID-19 case is detected in a place where large groups of people gather and the importance of self-isolation for close contacts. 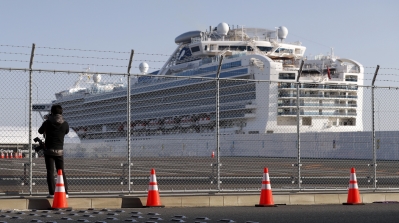 South Korea has also given an update on its numbers. The  Korea Centers for Disease Control and Prevention says there were  93 new coronavirus cases on Wednesday, bringing total infections to 8,413.

While slightly more than the 84 recorded on Tuesday, it is still the fourth day in a row that the country has reported fewer than 100 new infections.

China’s National Health Commission has released its latest data on the outbreak there – 13 new confirmed cases were reported on Tuesday, down from 21 cases the day before.

That brings the total number of confirmed cases in mainland China to 80,894, the health authority said in a statement.

The death toll from the outbreak in mainland China had reached 3,237 as of the end of Tuesday after 11 people died the previous day.

Those deaths were all in the central province of Hubei, with the provincial capital of Wuhan accounting for 10 of the fatalities.

The number of imported cases of the virus in mainland China reached 155 as of Tuesday, up 12 from a day earlier.

Australia has urged its citizens not to travel given the risks from the coronavirus as it spreads around the world and heightened border controls that are forcing airlines to cancel flights.

It urged anyone already outside the country to return.

“There may be a higher risk of contracting COVID-19 overseas. You may come in contact with more people than usual, including during long-haul flights and in crowded airports,” the government said in upgrading the advice. “Healthcare systems in some countries may come under strain and may not be as well-equipped as Australia’s or have the capacity to support foreigners.”

For all the updates from yesterday (March 17) please click here.

I’m running for office because of George Floyd

Why we left! EU savaged for ‘unfair’ trade policy as huge international fight breaks out