South Africa has extended its travel ban to stop the spread of the coronavirus outbreak as officials confirmed its first cases of local transmission – including four children aged five and under.

The boys – a five-year-old, two aged three and a two-year-old – have never travelled abroad, the country’s health ministry said.

“It is notable that there are eight cases of local transmission,” said Health Minister Dr Zwelini Mkhize.

The other four COVID-19 cases were adults with either no history of domestic or international travel.

On Sunday, President Cyril Ramaphosa declared a state of disaster and imposed a travel ban on foreign nationals from eight high-risk countries including the UK, US, Italy, Iran, South Korea, Spain, Germany and China.

Announcing the latest coronavirus infections on Tuesday, the health minister said the number of people who had tested positive for COVID-19 had risen to 85 from 62 the day before.

The travel ban was extended to Switzerland and France. 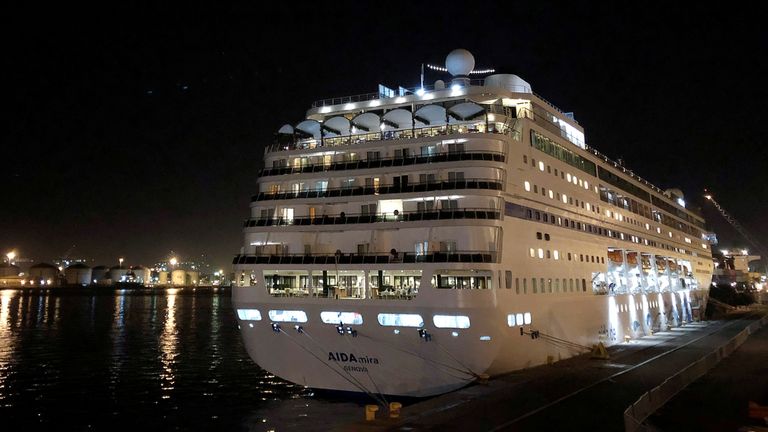 In addition, a cruise ship has been quarantined outside the port of Cape Town as a precaution after a crew member of a cargo ship who shared a flight with some passengers showed coronavirus symptoms.

The Transnet National Ports Authority (TNPA) confirmed that two vessels “are being held off port limits” due to suspected COVID-19 cases.

A crew member onboard the MV Corona cargo ship was on a flight with a fellow crew member and six passengers who boarded the German AIDAmira cruise ship.

The eight people have been evacuated and quarantined, and Transnet says the remaining cruise ship passengers are being quarantined and tested.

Details of the four young children being diagnosed with the virus comes as more cases are beginning to emerge of children contracting the disease around the globe.

A mother and father in Manchester in the UK are self-isolating after their nine-month-old son was found to have been infected, while a second newborn baby has tested positive for COVID-19 in Britain and is being treated at James Paget University Hospital in Norfolk.

The mayor of Paterson in New Jersey in the US said on Tuesday that a couple and their five-year-old son had tested positive for the coronavirus and were in self-quarantine.

New findings in a study of more than 2,000 children in China – a third of laboratory confirmed cases and two-thirds of suspected cases – suggests the vast majority of children who contract the virus are “asymptomatic” or experience “mild or moderate” symptoms.

Around 6% experienced severe or critical illness. One 14-year-old boy from Hubei province – where the coronavirus outbreak started in December 2019 – died in February.

“Children of all ages appeared susceptible to COVID-19, and there was no significant gender difference,” academics from across China concluded in their report, published in the journal Pediatrics this week.

In other developments across the globe: