For the first time in months, South Africans have sighed with something like relief as the number of coronavirus infections seem to have finally reached the ceiling.

However, with nearly 600,000 COVID-19 cases – the fifth highest total in the world – no one will be celebrating for this country that has been pushed to the very limit.

The government had months to prepare, but the health system has wobbled with a critical shortage of beds, staff and equipment. 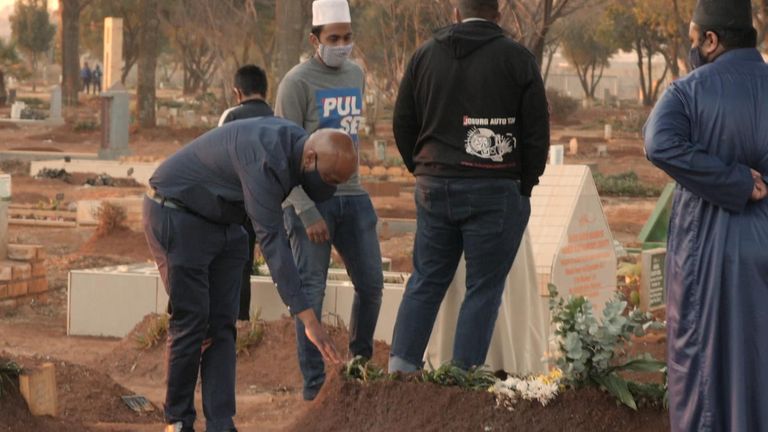 Allegations of corruption have dogged public officials involved in ordering coronavirus-related supplies and the official number of deaths, which stands at just over 10,000, is thought to be a small fraction of the true total.

According to the Johns Hopkins University, which is tracking the pandemic, the number of people who have died has reached 11,270.

As chaos and uncertainty swirled around the official response to the pandemic, a group of people in a community called Lenasia, just south of Johannesburg, decided to construct their own response as thousands of locals fell ill.

Lenasia, or “Lenz'” as it is known to residents, is a close-knit township, created by the apartheid regime in the 1950s as a place to house people classified as Asians.

And it is by working together that members of this community have done something remarkable, creating their own parallel healthcare system in the middle of a raging pandemic. 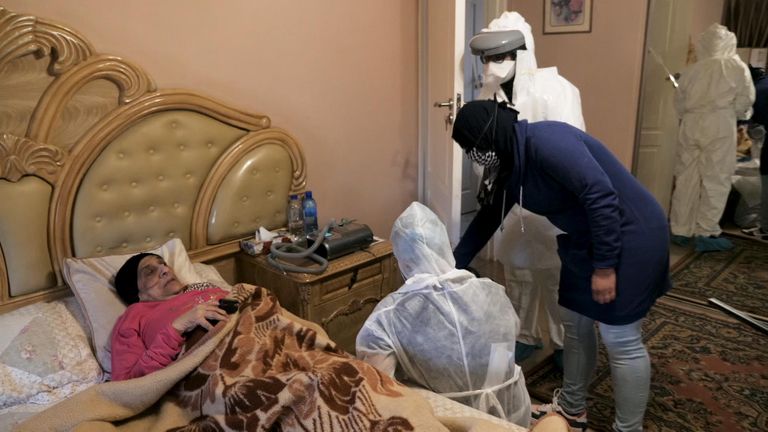 The man who helped get it all started is called Aboobaker Sayed, the head of the “Saaberie Chishty” community-run ambulance service, and we found him outside the ambulance station unwrapping boxes of oxygen equipment.

“I must be honest, the government hasn’t been doing much at all”, he said.

“We can’t be sitting back and waiting for the government to do something, because it will never happen.

“That’s why we need to be out be out there making a difference.” 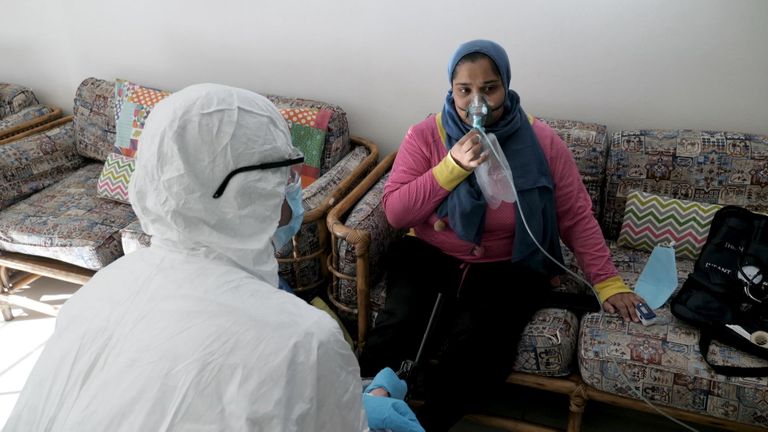 “We have over 60 units available for the community,” he continued.

“You have created 60 critical care rooms this community?,” I asked.

“Yeah”, he replied, adding: “We can provide for 60 people at a time and try and save 60 lives instead of one.”

This “home-based intensive care” is an extraordinary concept, but it also requires specialist physicians like Dr Fatimah Lambat to make it work.

Dr Lambat is an anaesthesiologist and an intensivist and she allowed us to join her on several of her “extreme house” calls along with fellow doctor – and sister – Safiyya Lambat. 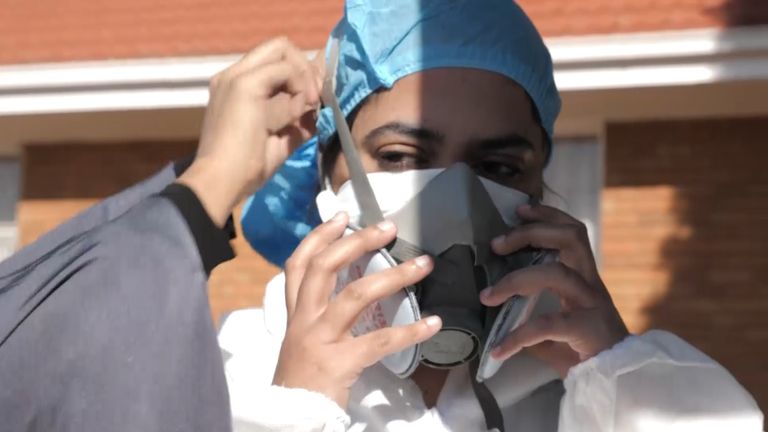 We found the pair donning biohazard protective suits on the grassy verge of Lenasia’s Nightingale Street.

“We as South African doctors are very, very used to improvising. This is what we need to do and we improvise,” said Dr Fatimah.

We followed them into the home of resident Mohammed Saloojee, who had been fighting for his life the past four weeks.

He was sitting upright in a chair in the master bedroom, but he did not look very well. His oxygen levels were low and his wife said he had been coughing up specs of blood in the early hours.

Dr Fatima prescribed steroids and pain relief and spoke to a physiotherapist who had already arrived. But the burden of care falls primarily on his loved ones, who must serve as 24-hour physician and nurse. 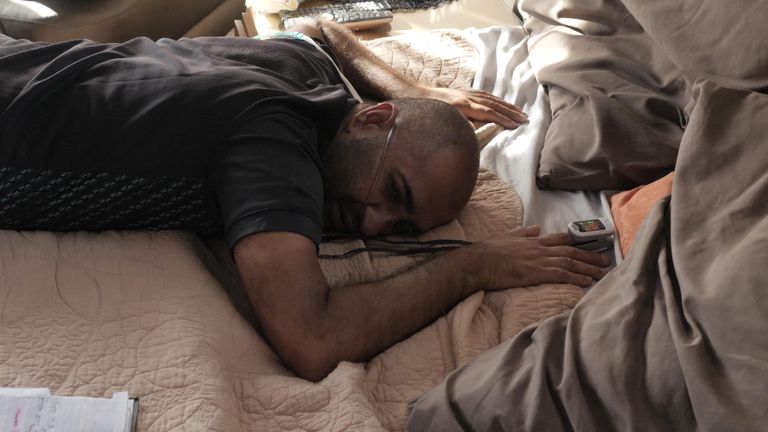 Mr Saloojee’s wife was struggling with the oxygen concentrator.

“Yes, I counted like that, four litres, yes,” she said, as a phalanx of buttons stared up at her.

Mr Saloojee climbed onto his bed after 30 or so minutes, his body aching with exhaustion.

“You have got a good team here,” I said.

“Excellent,” said Mr Saloojee as he began to cry, adding: “I hope we can meet again under better circumstances.” 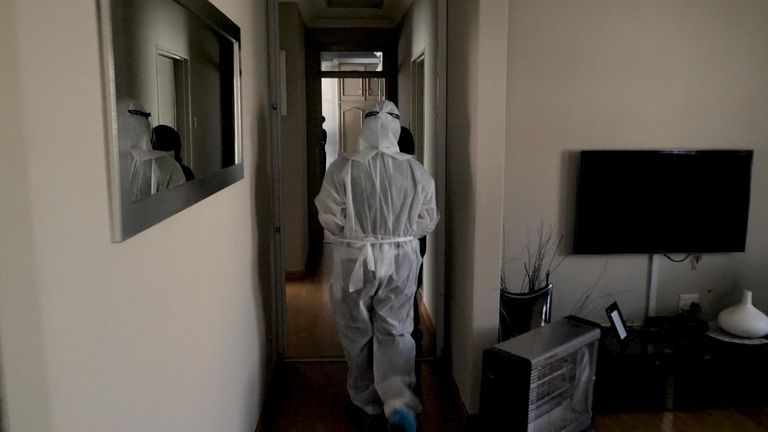 One day, she will write it all down and describe what they have achieved for an international medical journal.

Aboobaker Sayed says the intensive care project is a welcome distraction after his father and uncle died with COVID-19.

The two men helped to found and operate the community-run ambulance service and the responsibility will now pass to him.

“We make plans, but God has another plan and he is the best of planners, so we leave it to him,” he said.

“At least we can serve the community and these oxygen concentrators have helped.

“The situation is sad, but we deal with the reality.”

Europe Covid vaccination compared: How many people have had the vaccine? UK leads the way