About 100 protesters shouted “take back China,” denounced the ruling Chinese Communist Party (CCP) and waved flags as consulate workers loaded belongings into rental trunks. The five-storey building this week became the latest flashpoint between Beijing and Washington over trade, the coronavirus pandemic and military manoeuvres in Southeast Asia.

The tit-for-tat consulate closures have brought a sharp deterioration in relations between the countries, which have the world’s two largest economies.

Among the protesters, Zhony Yi Ma, 34, travelled to Houston with a group from New York to heckle consulate staff.

Police kept the crowd away from the building. 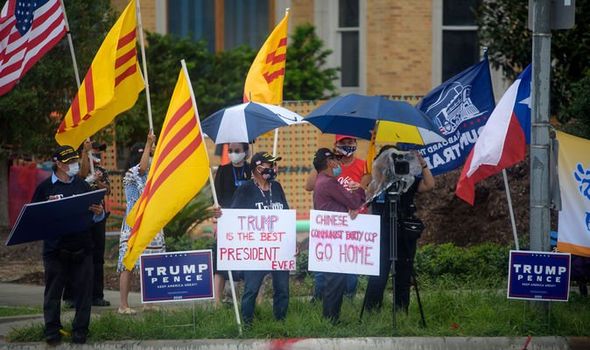 He said: “We want to end the CCP, take back China and build a nation like America.”

Other protesters included a group of supporters of the Falun Gong spiritual group, which is banned in China.

She said the CCP infiltrates groups and cannot be trusted.

She said: “I grew up in mainland China and have seen how the CCP lies.”

Nhat Nguyen, 58, praised US President Donald Trump and accused Chinese communists of spying around the world.

He wore a Trump 2020 campaign hat and waived the former flag of the South Vietnamese government that was backed by the US against the communist North in the 1960s-70s era Vietnam war.

Senior US officials this week accused the consulate of being one of the worst offenders in terms of Chinese espionage in the US and linked its staff to China’s pursuit of a vaccine for the coronavirus crisis.

US Secretary of State Mike Pompeo said the consulate had been “a hub of spying and intellectual property theft”.

The US consulate in Chengdu was also given 72 hours to close, or until 10 am on Monday, the editor of China’s Global Times tabloid said on Twitter.

Houston is a major medical hub known for top-notch research on cancer, infectious diseases and since the pandemic hit this year, vaccines for the coronavirus, which first emerged in China late last year.

The consulate opened in 1985 and has almost 200 employees, including about 150 locally hired staff, according to its website.

Relations between Washington and Beijing have deteriorated this year to what experts describe as their lowest level in decades over issues ranging from trade and technology to the coronavirus pandemic, China’s territorial claims in the South China Sea and its clampdown on Hong Kong.

China’s foreign ministry spokesman Wang Wenbin has said some personnel at the Chengdu consulate were “conducting activities not in line with their identities” and had interfered in China’s affairs and harmed its security interests.

But he did not say how.

Winnipeg shop going out of business due to coronavirus pandemic