Home » ‘Captain Tom,’ the 100-year-old who raised millions for Britain’s health system, gets a hero’s goodbye at his funeral.

Tom Moore, a 100-year-old World War II veteran, raised millions for Britain’s National Health Service during the pandemic by walking laps in his garden. He received military honors on Saturday.

[guns fire] “Daddy, you would always tell us, ‘Best foot forward,’ and true to your word that’s just what you did last year, raising a fortune for the N.H.S. and walking your way into the nation’s hearts. In some ways, we wondered, ‘Who would have thought it?’ Yet, knowing you as we did, your motivation and inspiration was no surprise.” “We had been so close as a family before this, but we were thrust even closer together as the world became enthralled by your spirit of hope, positivity and resilience. You are not a man in the habit of expressing your inner feelings, but this time together evoked an honesty between us that felt as magical as you becoming a beacon of light and hope to the world.” “We are all so proud of everything you have achieved and promise to keep your legacy alive. Thank you for all the special times we’ve shared. Our relationship cannot be broken by death. You will be with me always.” 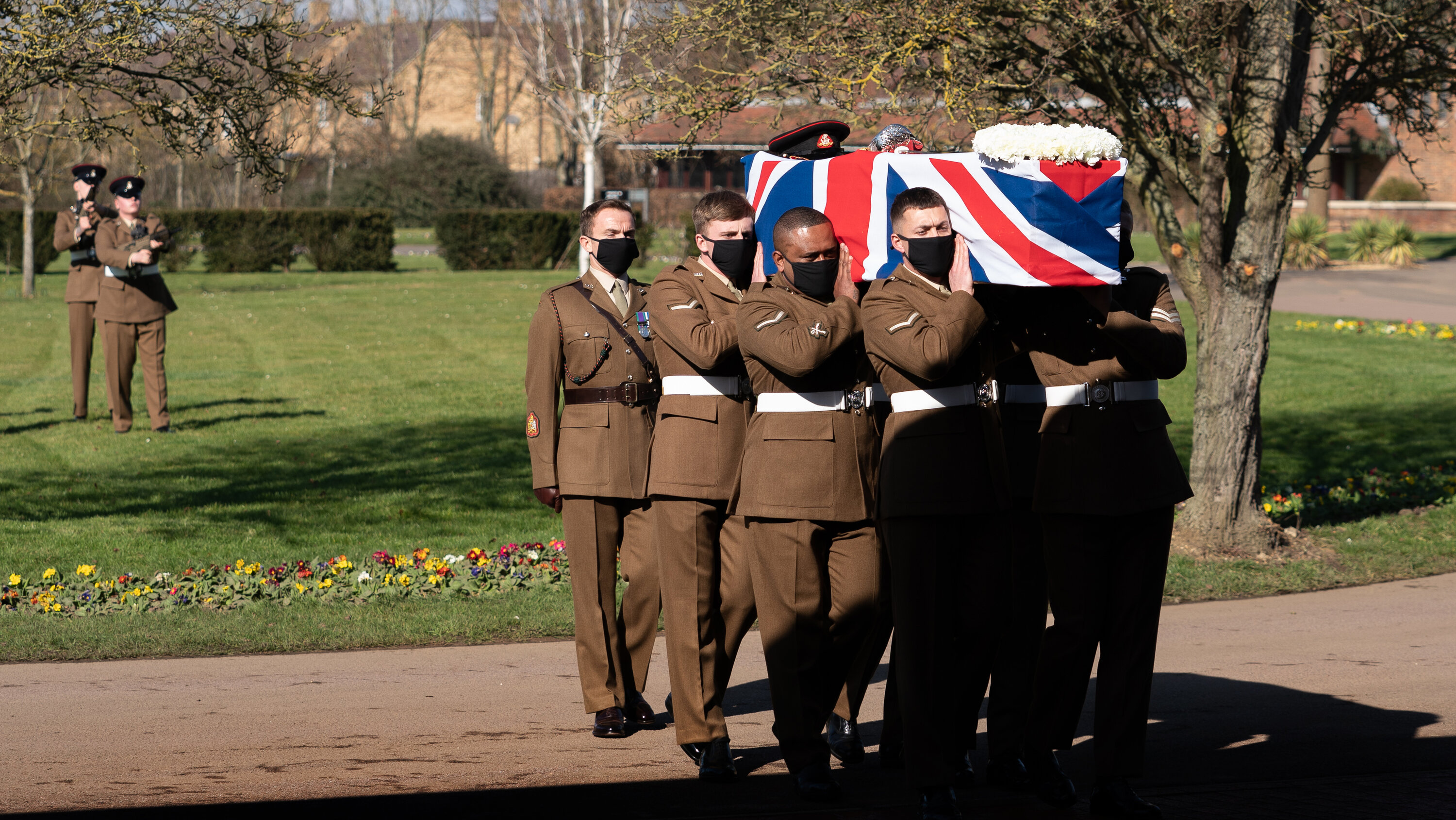 Tom Moore, the 100-year-old British national hero who raised millions of pounds for the National Health Service during the pandemic, was sent off with military honors at his funeral on Saturday.

Soldiers in Bedford, England, carried Mr. Moore’s coffin and performed a firing gun salute for the decorated World War II veteran, who came to be known and loved as “Captain Tom.” The ceremony was also marked by the flyover of a World War II-era Royal Air Force plane.

Mr. Moore became a national sensation last year when he took up his walker for charity and started doing laps around his brick garden patio in Marston Moretaine, a village an hour north of London.

His daughter, Hannah Ingram-Moore, publicized his walks and helped turn them into an online fund-raising campaign with the original goal of raising £1,000 for the National Health Service, which was stretched to the breaking point by the pandemic.

Mr. Moore ultimately did 100 laps, raising £32.8 million, or $45 million, and skyrocketing to beloved celebrity status. He died in February after being treated for pneumonia, and then testing positive for Covid-19.

“We had been so close as a family before this, but we were thrust even closer together as the world became enthralled by your spirit of hope, positivity and resilience,” Ms. Ingram-Moore said on Saturday, during a service limited to family members but broadcast online. “They too saw your belief in kindness and the fundamental goodness of the human spirit.”

With his spry charm, mischievous smile and dapper attire, Mr. Moore became a star of international media. He recorded a chart-topping song, “You’ll Never Walk Alone,” with the singer Michael Ball. And he caught the attention of Queen Elizabeth II, who made a rare public appearance during the pandemic to knight him at Windsor Castle.

When he died, tributes poured in from pop stars and everyday citizens alike.

Mr. Moore said in an interview with The New York Times in May that he viewed fund-raising as a way to support health workers, just as he recalled the nation supporting him and his fellow soldiers during the war.

“At that time, the people my age, we were fighting on the front line and the general public was standing behind us,” he said. “In this instance, the doctors and nurses and all the medical people, they’re the front line. It’s up to my generation to back them up, just as we were backed up.”

He spent the last few months of his life writing a book that included directions for his funeral, the BBC reported. In a section released by the family, Mr. Moore requested that the service include the song “My Way,” by Frank Sinatra. It did.

“I always did things my way,” he wrote, “and especially like the line about having too few regrets to mention.”

Hake and Monkfish From the Source