BBC Weather forecaster Louise Lear said Britons are likely to bask in the sunshine for most of the weekend thanks to a warm area being pushed into the UK from Spain. Despite the lockdown, Britons will be able to enjoy the fine weather from their windows and balconies but Ms Lear warned southerly winds may at times disrupt the calm conditions. The BBC Weather meteorologist said: “We had the central heating on for several months now and I think this weekend we’ll be able to turn it off and leave it off, at least throughout the weekend.

“It is getting warmer but also a little bit windier.

“The wind is going to be the key feature as to why it’s going to get warmer because high pressure is drifting off into the near continent, this low area is pushing in but it’s dragging in southerly winds.

“Although we could see gusts of wind in excess of 40mph in exposed west-facing coasts, it’s coming from a warm source. All the way up from Spain and so that means the temperatures are set to climb throughout the weekend.”

Ms Lear forecast temperatures will peak on Sunday but predicted the fine weather will start to settle in on Saturday after a brief time with cloud in control.

JUST IN: Weekend scorcher – Britain to bake in temperatures hotter than Greece 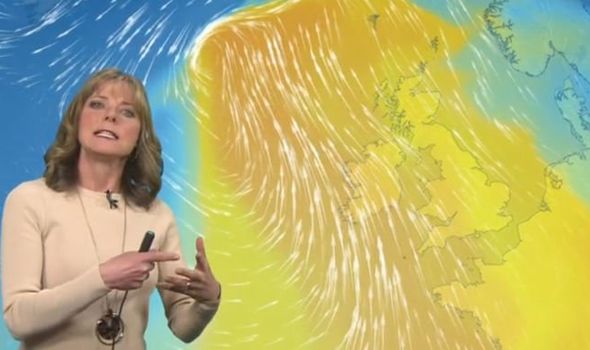 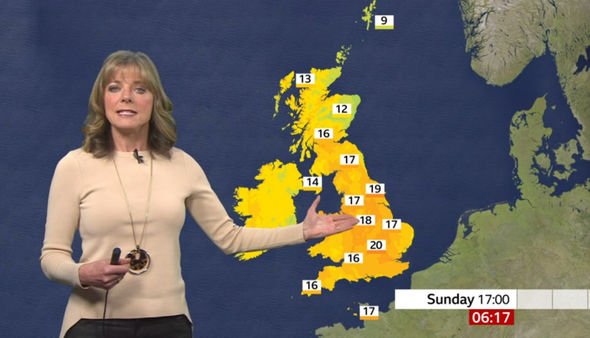 She continued: “For the here and now, a little bit of patchy mist and fog around.

“That should readily lift and it’s a fairly straightforward day for us weather forecasters out there because the cloud should break, we’ll see some sunny spells particularly across England and Wales. A fairly uniform afternoon.

“There’ll be a little bit more cloud through Northern Ireland and Scotland, a few isolated showers here, not quite as warm, 9C to 11C, but we’re going to see widely across England and Wales mid-teens, maybe peaking close to the capital at 16C (61F).

“Through the night we keep those clear skies but, because of that southerly wind and its warm source, it’s not going to be a cold night and that southerly wind is going to break up the cloud further north. A fairly quiet night to come, overnight lows comfortable for getting a good night sleep.” 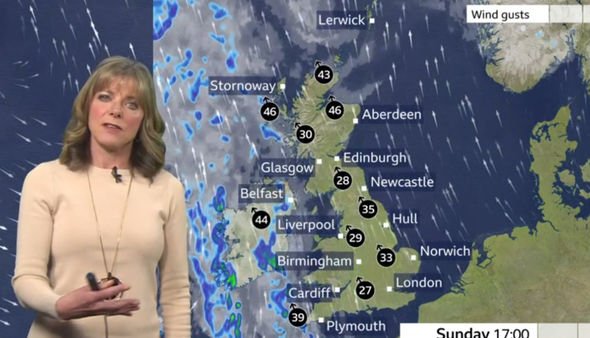 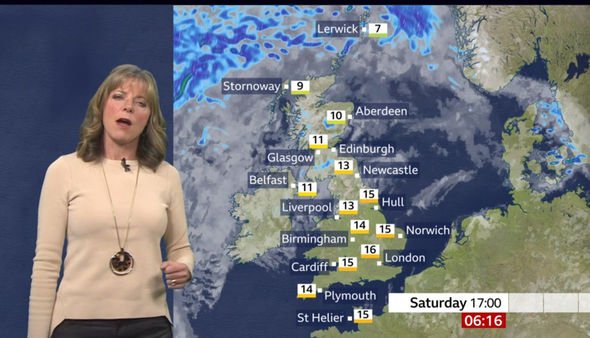 While Ms Lear said Sunday is set to kick off with “lots of sunshine” she also warned western areas across the UK are likely to experience a bit more cloud and some of the strongest winds.

Temperature-wise, however, there is an expectation for thermometers to hit the mid to high teens in most parts of the country.

The BBC Weather forecaster added: “We start off tomorrow morning, there’ll be lots of sunshine around, the exception with this area of low pressure is out to the west. 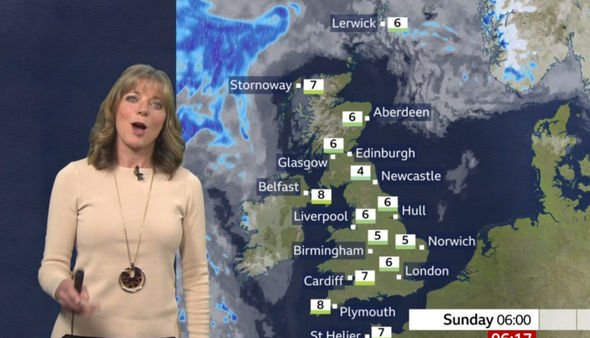 “The wind will strengthen, gusts in the excess of 40mph, we’ll see a little more cloud into Northern Ireland, maybe western fringes of Scotland by the end of the day but elsewhere plenty of sunshine around.

“Yes, it’s going to be a breezy affair but it’s coming from a southerly direction so temperatures are expected to respond.

“So we could see mid to high teens across England and Wales and, maybe, in sheltered parts of eastern Scotland peaking at 20C.”

Despite the warm weather forecasted, the Met Office urged Britons to remain indoors and avoid crowded areas like parks as the UK continues to battle the coronavirus.

The Met Office tweeted: “Even though the weather is looking largely dry with some warm spells of sunshine for some of us over the weekend, please protect the #NHS and save lives by #Stayingathome.”