ZURICH (Reuters) – On March 6, Gianluca Preziosa, the head of an Italian ventilator maker, received an urgent request. The Italian authorities wanted his help for an all-out effort to meet a desperate need for ventilators. 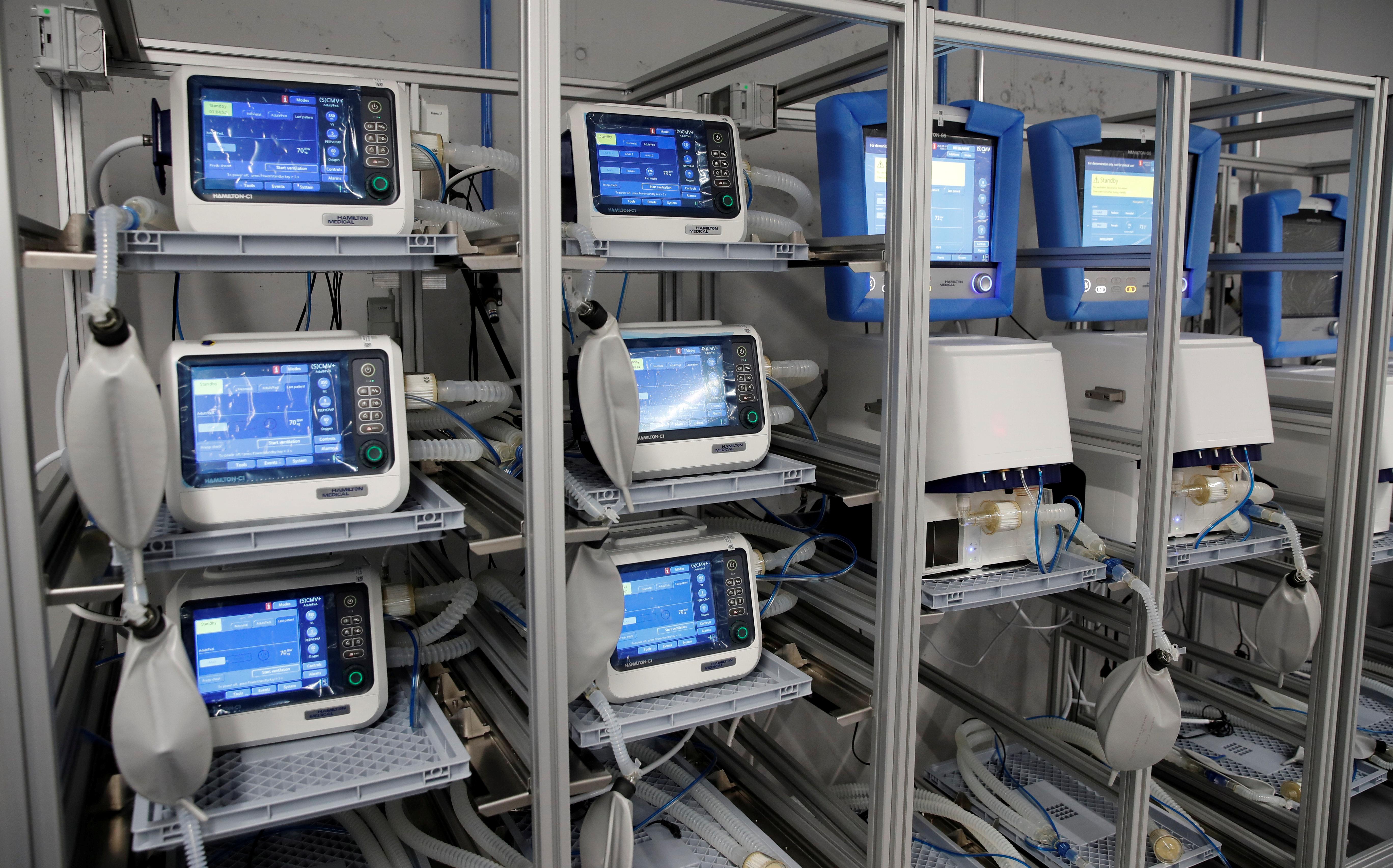 Now, his Bologna-based company, Siare Engineering International Group s.r.l., has 25 army technicians working with its production supervisors to manage the expanded production and help assemble machines. The army also has made personnel available to the company’s suppliers, Preziosa said.

“Usually we produce 160 machines a month. The goal is to produce 2,000 in four months, so more than triple our monthly production,” Preziosa told Reuters in an interview. The executive added that companies involved in the supply chain of producing ventilators “cannot respond to the enormous demand because this is a niche industry.”

Siare belongs to a normally quiet corner of the medical equipment market that has found itself on the front line of the century’s biggest health crisis caused by the rapid spread of the new flu-like virus, which can lead to breathing difficulties and pneumonia in severe cases.

Ventilator makers are under pressure to sharply increase production even as the pandemic has disrupted the transport and supply of crucial parts, such as hoses, valves, motors and electronics – some of which come from China, the original epicenter of the outbreak that has killed more than 10,000 people across the globe.

Amid shortages, governments are turning to help from the military, enlisting other manufacturers and even looking to 3D printing in the hopes of ramping up production of the potentially life-saving breathing machines. In Italy, a team of doctors has developed a way to provide oxygen to two people from one ventilator, therefore doubling capacity, according to the Italian region of Emilia Romagna’s commissioner for coronavirus.

Ventilators, which cost tens of thousands of dollars, are mechanical breathing devices that can blow air and oxygen into the lungs. They are crucial for the care of people with lung failure, which can be one of the complications suffered by patients with severe COVID-19, the disease coronavirus causes. But they don’t necessarily save people.

“The mortality amongst the intensive care population is being estimated as 50 to 60%,” said Rahuldeb Sarkar, a consultant physician in respiratory medicine and critical care in Britain. If a critically ill patient doesn’t get a ventilator, “he dies within a few hours.”

One of the world’s largest makers of ventilators, Swiss-based Hamilton Medical AG, expects to increase production to about 21,000 ventilators this year, up from 15,000 last year by deploying marketing staff on the production line, among other measures. But with many more orders than it can fulfill, the company faces difficult decisions on where to send them.

Hamilton Medical’s chief executive, Andreas Wieland, said the company is prioritizing those countries where the need is most dire, notably Italy. Hamilton Medical sent 400 ventilators to Italy last week and expects to send another shipment soon. But, he said, that also means turning some governments down, which has resulted in one country reacting aggressively by threatening to blacklist his company.

“We’re trying not to deliver into a country that is merely stocking up reserves, where there is practically no virus, so they can prepare. We’re trying to serve those where the emergency is most extreme.”

The global ventilators market is worth more than $1 billion annually, according to Hamilton Medical, which says it has roughly a quarter share of revenue. Other ventilator makers include U.S.-based ResMed Inc, Getinge AB of Sweden, Germany’s Draegerwerk AG, and China’s Beijing Aeonmed Co, Ltd.

Companies say demand has topped out in China but is surging, from Italy, elsewhere in Europe and the United States as the virus continues to spread. More than quarter of a million cases of coronavirus have been reported.

In Italy, where more than 4,000 people have died from the virus, hospitals are suffering severe shortages of ventilation and other equipment, as well as medical staff. The first products resulting from the army technicians’ work at Siare should start coming out from Saturday, a spokesman for Italy’s defense ministry said.

The Italian government has also purchased nearly 4,000 of the 5,000 units of ventilating and other equipment it tendered for earlier this month. In Germany, where hospitals had about 20,000 ventilators before the outbreak, the government has placed an order for 10,000 machines from Draegerwerk – the equivalent to a year’s normal production at the company. Demand in France, which is usually for about 1,000 to 1,500 ventilators annually, has increased to hundreds per week, said Christophe Hentze, director-general of the French unit of Löwenstein Medical Innovation GmbH, a German medical equipment maker, speaking on France Info radio.

Britain’s health minister has said the country needs “as many ventilators as we can get our hands on.”

But getting the parts can be difficult at a time when some countries are shutting borders or taking steps to safeguard stocks of medical supplies.

Hamilton Medical’s Wieland said Romanian authorities had in recent weeks halted a shipment of ventilator hoses that his company makes in a factory there on the ground that it could be important medical equipment. Wieland said he needed the intervention of the Swiss consulate in Romania before custom officials allowed it out.

“We had to use political channels to let them know that these products, by themselves, aren’t valuable to them,” Wieland said.

A spokesman for Switzerland’s foreign ministry said: ‘Our ambassador in Bucharest was in contact with the Romanian authorities to contribute to the resolution of the situation.” Romanian officials did not immediately respond to a request for comment.

Sweden’s Getinge has had experiences of “bottlenecks” at suppliers that it has so far managed to solve, partly with the help of politicians, said chief executive, Mattias Perjos. Getinge says it plans to increase output by 60%, from about 10,000 ventilators last year.

In China, medical device manufacturer Beijing Aeonmed relies on imports from countries including Switzerland, the United States and Netherlands for key components such as valves and turbines to make ventilators, said purchasing director Wang Xue. But the company’s international suppliers have experienced difficulties during the global outbreak in sourcing some basic parts to produce the components it needs.

“If the imported materials cannot be supplied in time, the production capacity of some [ventilator] models will be severely affected,” she said. “We are calling our foreign suppliers every day.” Beijing Aeonmed says it has tried to help its international suppliers to replace those previously foreign-made supportive components with China-made alternatives. The company said it has capacity to produce about 1,500 ventilators for overseas orders this month and hopes to increase that to 4,000 in April.

Some countries, including Italy, Britain and the United States, are drafting automakers and aerospace manufacturers to ramp up ventilator production. Authorities hope big manufacturers can repurpose some factories and use digital design expertise, including 3D printing, to make up the expected shortfall in vital medical hardware.

In Britain, the government has turned to other manufacturers. McLaren Group Ltd., a conglomerate that includes a sports-car maker, is looking at how to design a simple version of a ventilator. Nissan Motor Co, is working with others to support existing ventilator producers.

On Friday, Britain said engineering companies had come up with an emergency ventilator prototype that could be approved next week.”We need as many as you can possibly make and we will buy them,” said Britain’s health minister Matt Hancock.

The British government has said it has increased its stocks to about 8,000 ventilators. The head of Britain’s National Health Service told a parliamentary panel he expects that to increase to just under 12,000 over the next several weeks.

U.S. ventilator maker ResMed has reallocated resources away from producing other devices to meet demand that is more than four times normal levels, said its chief executive, Mick Farrell.

One issue has been restrictions on travel intended to stem the spread of coronavirus, which has affected ResMed’s Singapore factory which employs many workers from neighboring Malaysia. He said ResMed has appealed to the Malaysian government for an exemption so its workers can travel to Singapore. 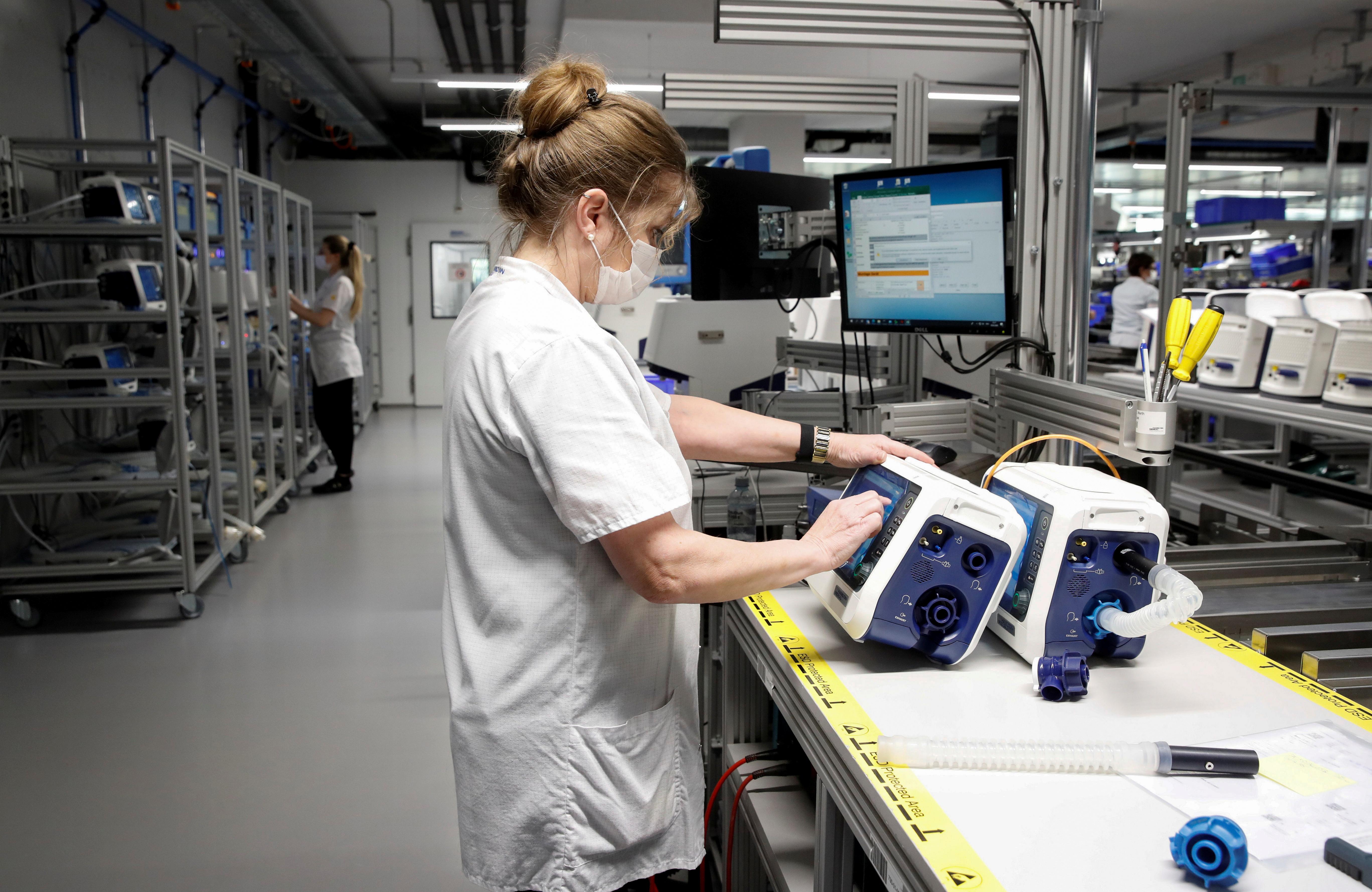 In the United States, hospitals are considering re-deploying older ventilators, which still work but had been abandoned because they don’t connect to modern electronic records systems, while the U.S. Department of Defense has donated 2,000 ventilators, said Nancy Foster, vice president of the American Hospital Association. “Hospitals are also looking into re-purposing the machines that administer anesthesia to be used as ventilators.”

The United States had equipment to provide ventilation to about 160,000 people, according to research compiled by the Johns Hopkins Center for Health and Security. The hardest hit states now are urgently seeking more. That includes New York state, which is looking to add to the roughly 5,000 to 6,000 it already has, a figure that Governor Andrew Cuomo has said meets only a fifth of the potential demand.

“No one really knows what the national need is. It really depends on how bad COVID-19 gets,” said Chris Kiple, head of portable ventilator maker Ventec Life Systems Inc, in Bothell, Washington. “If it truly turns into a significant pandemic, we’re really going to have to focus on ventilator supply until we can get a vaccine to really help save lives.”

‘It has to end with us’: Winnipeg CFL player hoping to spark culture shift in sports

Donald Trump humiliated as Fox News host derided President: ‘This will kill you’