Membership travel, with its emphasis on peace of mind, is surging during the pandemic. But is health and safety only a guarantee for those with an “in” and money to burn? 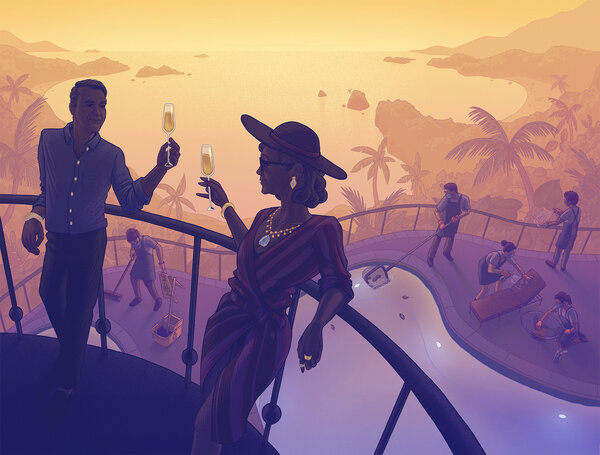 International travel had been a major part of Paul Brinkman’s life for years. Mr. Brinkman, 47, his wife and their four children spent months meandering through Europe, flew to Puerto Rico after Hurricane Maria with relief supplies, and, this past February went to Kenya and Tanzania. While away from home, the family would frequently stay in Airbnb or Vrbo home rentals, sometimes up to 60 nights per year.

But with the onset of the pandemic, the evaporation of international travel and the increasing importance of health and safety protocols, Mr. Brinkman, chairman of the board of Brinkman Construction, found himself signing up for Exclusive Resorts, a membership-based club that owns about 400 private residences and villas. While Exclusive had been on his radar for years, the value proposition — on-site concierge services, flexible cancellation fees and now, new partnerships with both a private jet operator and a private medical service — was suddenly more appealing. The family now plans to spend Presidents’ Day weekend in February at an Exclusive property in Real del Mar, Mexico.

“You have an ambassador that helps you with anything, like your own private travel agent,” Mr. Brinkman said of Exclusive. “When you rent a house through Airbnb or Vrbo, you’re at the mercy of owners. Many of them are doing a great job, but it’s on you to ask, and to assess, which is a lot more work.”

The ability to take care of things is a part of the promise of membership travel, even if the ask has shifted from an exclusive dinner reservation to an option for medical evacuation. Club benefits often center on easing the burden of planning and uncertainty; now, safety is an essential part of that. Those benefits vary, of course, and are largely tied to the cost, and type, of the club you’re joining. A membership to the international jet-setter’s Soho House grants you access to private clubhouses outfitted with restaurants, work spaces, pools, hotel rooms, and more, around the world — so long as you’re deemed a “like-minded creative soul” and your application is approved. Newer luxury clubs like Manifest Travel offer carefully curated, small-group trips, with private air travel.

These don’t come cheap: For Exclusive, after an $150,000 initiation fee, members must book a minimum of 15 days per year, which at $1,395 per night, translates to an annual cost of at least $20,925. Even the more affordable timeshare model, which brokers in the promise of flexibility, spacious accommodations and familiarity, require an average initiation fee of $20,000.

Privatized travel, in all of its forms, has been booming in a year where much of the industry is grappling for a lifeline. With international travel on hold and the future of flying uncertain, travelers are cashing in on those timeshares, buying into second-home communities boasting exclusive perks and joining luxury travel clubs in unprecedented numbers. This, in part, is because membership models may be particularly suited to pandemic-era travel — Exclusive, for example, swaps in new pillows after each stay — but their proliferation raises an interesting question. Is health and safety only a guarantee for those with an “in” and money to burn?

The splashiest news regarding membership-centric travel came this summer, with the announcement that the Chateau Marmont, the celebrity-favorite in Hollywood, would be transitioning to a members-only hotel.

Before the pandemic, approximately 70 percent of hotel guests were repeat customers and the top 100 guests generated the majority of room revenue, according to a press representative for the Chateau Marmont.

“In all but name, we’re already more of an exclusive membership community than even outright membership-based models,” said the owner André Balazs. “I prefer to think of it as a members’ hotel.”

The new concept centers on members owning a certain portion of the Chateau and additional properties, which may include locations in London, New York, Milan and Paris. Many other details remain unknown. Mr. Balazs said that the shift is still in the planning phases, but shared that a membership fee would likely not be required, and that members might be invited by invitation. The transition is expected to take place sometime next year.

Some questions have been raised regarding the motivations behind the decision. According to the Hollywood Reporter, some believe the shift is meant to break up an attempted employees union; the article also brought up allegations of misconduct and abuse from Mr. Balazs and hotel management. A press representative for the Chateau Marmont dismissed those claims.

Strong growth in a struggling industry

News of the Chateau’s shift stands out in a year of constantly shifting travel, but membership-based luxury travel options are nothing new. Exclusive Resorts was founded in 2002, by the brothers Brent and Brad Handler. Both left the company to found Inspirato, another luxury membership-based travel club, in 2011, which instead of owning properties, as Exclusive Resorts does, the company signs long-term leases of private homes and hotels. This, the company says, allows for a wider array of properties, a less pricey membership based on monthly fees and a larger membership base — though still for those with very high net worths. The cheapest membership begins at $600 per month, with a $1,200 initiation fee, and does not include accommodation fees.

Both companies hit a hard pause back in March, refunding members for trips previously planned. Since then, they have seen an almost extraordinary surge of interest when they resumed operations in May and June.

“We shut down our whole portfolio from March 30 to May 15. And in July, we came roaring back,” said Mr. Handler. “We saw our highest occupancy ever — near 90 percent.”

“This past August, we saw the highest level of demand since 2013,” said James Henderson, the current chief executive of Exclusive Resorts. “We signed members in August that have been in our database as prospects 10 years ago and decided now, at this time, they wanted the security and trust that we can offer.”

Examples of rapid, unusual interest abound across the luxury space, including membership clubs that operate based on the more traditional ownership model.

“We are seeing incredible growth,” said Mike Wilcynski, the general manager of Moonlight Basin, a home ownership-based destination community and members club in Big Sky, Mont. “On Dec. 1, 2019, we had 384 members. This December, we’re on track to have around 480.” Purchasing a home site on Moonlight Basin’s property, which generally go for a base of $800 to $1,900 per square foot, allows members access to a private lodge, golf club, social events and a dedicated staff. (Initiation fees for a comprehensive membership cost $100,000, plus annual dues of $13,000.)

Brittanny Havard, the director of marketing of the Alpine Mountain Ranch & Club, also cited, “literally unprecedented sales. We’ve sold out of all our remaining inventory,” she said.

The 1200-acre ranch in Steamboat Springs, Colo., which is similarly based on owning a home on the property, offers various membership tiers which may include everything from intimate events, like a Basque-style, wine-paired dinner centered around a whole roast lamb, to access to the adjacent golf club and a private, slope-side club at Steamboat Springs ski resort. Homes in this community tend to clock in at around $5 million.

“We believe it has to do with the trend of luxury buyers fleeing dense, urban centers, kind of combined with a do-or-die mentality,” Ms. Harvard said. “Covid has taught us, if nothing else, life is short. Instead of waiting to retire in five years, do it now … build your dream home!”

On the lower end of private: timeshares

Jason Gamel, president and chief executive of the American Resort Development Association, the timeshare industry’s trade association, noted that while timeshare developers are seeing slightly slower growth from new customers, current owners are spending more thanks to familiarity, available space, and the drivability of many timeshare locations.

Wyndham Destinations is one of the world’s largest time-share companies. At its Wyndham Vacation Clubs, which include four different brands, 900,000 owners, 230 Wyndham club resorts and 4,300 affiliated properties, online bookings for Club Wyndham (the flagship of the four brands) were up 18 percent in July, and 80 percent of resorts were seeing longer stays from guests, according to Noah Brodsky, chief brand officer of Wyndham Destinations. Mr. Gamel speculated that, in lieu of bigger, international trips, timeshare members are opting to splurge on travel within their clubs, instead.

Newer membership companies are making health and safety factors a core part of their pitch, if not the entirety of it. Manifest Travel opened its doors in August, centering on high-end, small group trips based out of local chapters in San Francisco, Los Angeles, San Diego, Santa Barbara, Phoenix and Denver. All of the club’s curated itineraries are to nearby, domestic destinations and include travel via private plane (Jeff Potter, the founder, conceived of the idea pre-Covid, but acknowledges that the model is particularly appealing).

The ability to pay for membership, and therefore, a kind peace of mind, is and has always been a privilege. But it’s a highly appealing one in uncertain times.

“In the short term, I think this focus on safety has increased the profile of clubs like ourselves,” Mr. Henderson said. “But I don’t necessarily think that this is the only way people are going to travel in the future. We have very specific types of offerings and we’re not looking to change that. Plus, our members also join for a sense of community.”

‘If I’m Going to Get Sick and Die, I Might as Well Do It at Disney World’