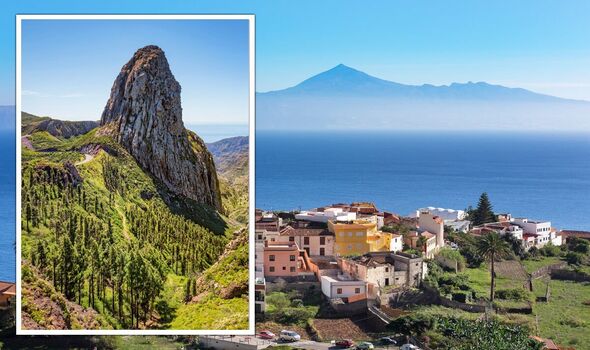 The Los Pueblos Más Bonitos de España campaign identified Spain’s most beautiful villages. A village in the Canary Islands was described as one of the archipelago’s “best preserved”.

Agulo is known as the “bonbon of La Gomera” and is the oldest town on the idyllic Spanish island.

The campaign said: “Agulo is an immense viewpoint dyed by the green of its crops over the Atlantic Ocean.

“Its old town is one of the best preserved in the entire archipelago and it is formed of narrow, cobbled streets, which transports us to bygone times.”

Located on the island’s north coast, the town enjoys incredible views of the Atlantic coast and the lush surrounding landscape.

Tourists will find the old town in the lower area of Agulo and can escape the stress and chaos in its narrow cobbled streets.

Visitors might like to explore the House of Jose Aguiar, a native painter famed throughout the Canaries.

At the Mirador de Abrante, tourists can enjoy breathtaking views from within a glass platform.

One tourist wrote: “Spectacular views. Very narrow road all the way up with the jeep but worth every second.

“The views of Tenerife and El Teide were breathtaking and we were very lucky to visit on a magnificent clear day.”

Over Easter, Agulo celebrates a huge fiesta where young men leap through fire to test their bravery.

Tourists can also explore the nearby Garajonay National Park where there are numerous hiking trails.

Garajonay National Park covers 11 percent of La Gomera and has a huge diversity of plant species.

The mystical park is often covered by a sea of fog and VisitSpain warns the park will “bewitch” tourists like a “fairytale”.

La Gomera is the third smallest of the Canary Islands and is usually quieter than Tenerife or Gran Canaria.

British tourists can’t fly directly to La Gomera but can reach the island with a domestic flight from Gran Canaria or Tenerife.

They can also take the ferry from Tenerife and there are usually six crossings per day, making the island suitable for a day trip.

The journey only takes around one hour and the small island is easy to explore over the course of a day.

During January and February, temperatures reach around 20 degrees with an average of four days of rain.

The Canary Islands are some of the closest winter sun destinations for British tourists and a great budget option.

There are plenty of family friendly hotels and many of the UK’s top holiday providers offer package deals.

Rules for taking food on planes – including BA, Ryanair, Easyjet, Tui and Jet2