This really is an odyssey! BBC veteran Michael Buerk went to Dubai on business, then planned to return via Iceland to avoid ten days in a quarantine hotel – so how on earth did he end up in Athens?

Now I’m beginning to feel like that Odysseus chap — you know, ten years wandering, friends gone, money gone; the world’s full of terrors and I still can’t get home.

Sadly, this isn’t a Greek myth; it’s the reality of travelling in today’s Covid world.

Odysseus had it easy, by comparison. In his day, there was no Border Force waiting for him at the end of his quest, no chaos at the airport, no automatic house arrest and no compulsory ‘I’m going to stick this up your nose and that will be a couple of hundred quid’ every five minutes. 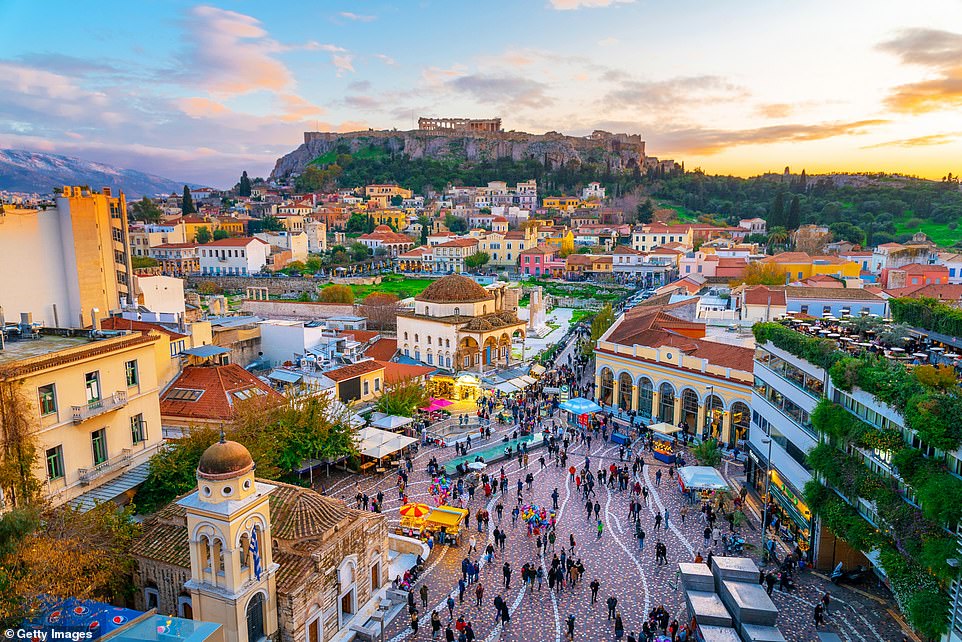 The beautiful Monastiraki Square in Athens. The city is where BBC veteran Michael Buerk has ended up following a business trip to Dubai

I’d swap that any day for Sirens trying to seduce me and a bit of bad weather. And they called him a hero.

As it happens, Greece is where I am currently holed up. My nose is raw from all the Covid tests, the credit card’s been so overworked it looks like a potato crisp.

I didn’t mean to come here. These days you go where you can. Anywhere they’ll let you, basically; a kind of global bagatelle with masks.

It all started a month ago. A business trip to Dubai, pressing enough to be permitted to leave the country, which was saying something back in April, when the UK Government’s travel restrictions made Cold War East Germany look like Club Med.

Not that anybody checked. The Border Force had its feet up and we could have breezed through Heathrow in our bathers whistling Cliff Richard songs for all anybody cared.

We weren’t going for fun. Dubai’s not a place I’d go for a holiday at the best of times. Its thickets of skyscrapers, its theme parks and shopping malls — its whole vaulting ambition — are amazing, I know. But my idea of bling is my Garrick Club tie. Any ride that doesn’t involve waltzing in a giant teacup frightens me. And what I loved about lockdown was not having to shop.

Besides, it’s 40c there now and all you can see is sand.

But they’ve done well with Covid. Their vaccination programme is better even than ours; test and trace, light-years better.

It works, for a start. Everyone seems to get tested all the time. A middle-aged expat I know has had 50 PCR tests already. Many get them free with work.

As a result, Dubai is back in business. Masks are compulsory in public, there’s some sensible social-distancing, but the shops and the restaurants are open, companies back to near-normal, the economy struggling to its feet.

The snag is that it’s still on the UK’s red list. That means compulsory incarceration on return in a Heathrow hotel for ten days at £1,750 a head.

No problem, we thought. We would wait for the Government’s green list and pick a place we could go for ten days, and then swan back quarantine-free.

It was a blow when the list consisted almost entirely of outcrops of Antarctica and countries that wouldn’t let us in. 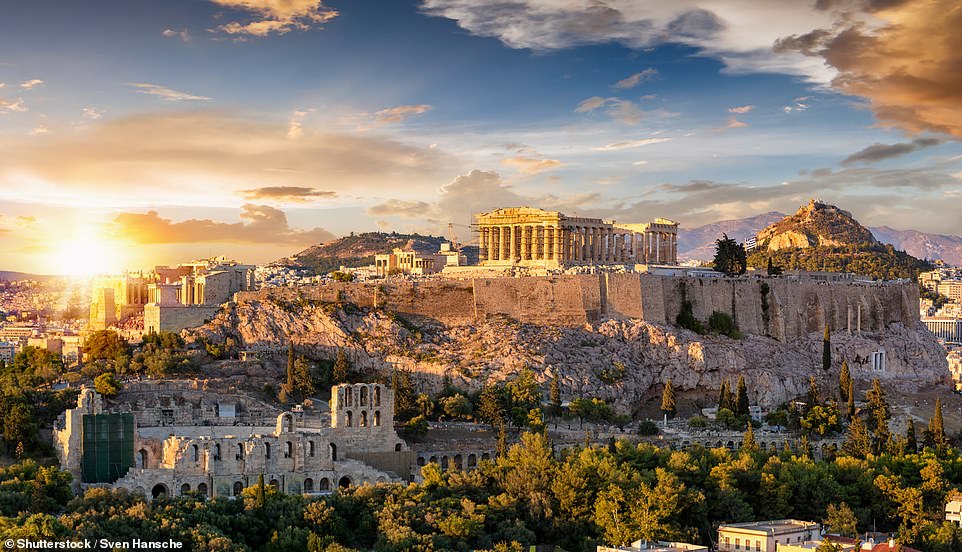 Michael says that the hotels in Athens are empty and there’s hardly a foreigner to be seen. He added: ‘We’ve had the Acropolis, and its marvellous museum, practically to ourselves’

Except for Iceland. So Iceland it was. It would make a change, we thought, and our shorts and sandals should cut quite a dash in the bitter cold.

Expensive place, Iceland. We spent a small fortune booking transfers and accommodation, and a large one on the plane tickets. We foreign correspondents know our stuff and I picked a Lufthansa flight via Frankfurt which would check the bags through, so we would only be in transit.

The check-in lady was about to send our bags down when a stern figure appeared and chucked us off the flight.

For reasons no one seemed able to explain, we’d have to clear Icelandic immigration in Frankfurt. To do so would mean leaving the transit area and officially entering Germany, which UK citizens are currently not allowed to do. Danke and goodbye. Cue 48 hours of panic. Where in the world would let us in? Wherever could we go to escape being banged up in a Heathrow hell-hole?

Which is how we came to Athens. The Greek health official looked at the scrappy, handwritten NHS card showing our Covid vaccinations and smiled. He’d have kissed us, I think, given the slightest encouragement. The passport officer practically pulled us into the country. The year’s first tourists. We’re saved!

Greece has only just emerged from a lockdown since November so strict you needed permission to step out of your front door. It’s like VE Day down Ermou Street and Monastiraki Square.

But the hotels are empty, there’s hardly a foreigner to be seen; we’ve had the Acropolis, and its marvellous museum, practically to ourselves.

It feels safe even though their vaccination programme is way behind ours. Greeks, amazingly, are obeying instructions to wear masks. Which is why we’re sitting here in a lovely little boutique hotel in the Plaka called Sweet Home, stuffing ourselves with souvlaki and tzatziki and drinking retsina — everything astonishingly cheap. They’re coming to the hotel to do our PCR test for our return to the UK (50 euros — wake up, Matt Hancock!).

Greece is on the amber list. So, ten days’ house quarantine after we’ve queued our way through Heathrow, plus paying hundreds more on new tests.

Not all that sweet a homecoming, then, but to have been travelling at all in these times of plague has been extraordinary — an expensive reminder of all we’ve lost, and, insh’Allah, will someday soon have again.

Hôtel Les Deux Gares Is the Coolest, and Most Colorful, New Place to Stay in Paris