Home » Travel » Help! Where is the Safest Seat on an Airplane?

Deciding where to sit on a plane has always been an exercise in strategy and skill: how to get the most legroom, the best shut-eye, the quickest exit. The stakes certainly feel higher now. 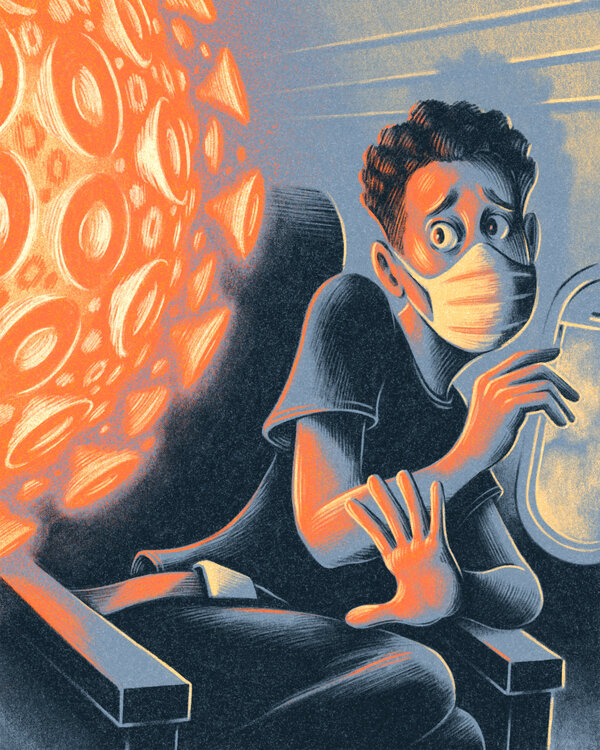 My son is flying from Los Angeles to New York City for Thanksgiving. I got him a ticket on Delta Air Lines because they’re blocking out the middle seats. That said, the seating configuration of the plane is a 2-3-2. I’ve heard that window seats are safest, but there’s always a risk that someone will sit next to him. What do you recommend? Susanna

Deciding where to sit on a plane has always been an exercise in strategy and skill: how to get the most legroom, the best shut-eye, the quickest exit. The stakes certainly feel higher now.

Before we start, some numbers to put your mind at ease: In its third quarter, Delta’s passenger load factor — the percentage of available seats that are filled — fell from 88 percent last year to 41 percent this year, according to the airline’s latest investor report, meaning there are plenty of not-full flights. New data also suggests that when everyone is wearing a mask and other protocols are met, planes — with their high-efficiency, virus-zapping air filters — are less risky than grocery stores. But I’ll leave the specifics of viral dispersal to the scientists and try to outline some of the things your son can do to avoid sharing an armrest with a stranger.

Before the pandemic, the Boeing 767 aircraft that your son is scheduled to fly on would have accommodated 165 passengers in economy class. Delta currently has a 70 percent capacity limit in several cabins, including economy class, bringing the passenger maximum to about 115. Even on a flight where economy class is 70 percent, about 50 seats are guaranteed to be empty.

My original plan was to take the number 115, geek out with the seat map on Delta.com and figure out the likelihood of your son sitting alone when the plane fills to 70 percent. That, I learned, is a huge waste of time.

Delta, unlike many of its peers, will continue blocking middle seats through at least Jan. 6 in an effort to separate smaller parties of one or two. Parties of three or more can book adjacent — including middle — seats. On aircraft that have sections without middle seats — say, the 2-3-2 configuration of economy class on a 767 — other seats will be blocked as tickets are purchased and seats are selected. The more people who sit together, the higher the likelihood that your son can sit alone when the plane is 70 percent full, but there’s no way of predicting how many people will be flying individually, in pairs or in groups.

There still are ways to be proactive; for instance, your son can use the Fly Delta app to change seats until about an hour before boarding. Just as one might refresh fantasy football scores or election results, your son can be “that guy” at the gate, hunched over the seat map. He can also continue to make changes with the gate agent and (unofficially, perhaps) onboard.

Additionally, said a Delta spokeswoman in an emailed statement, “if customers are uncomfortable with where they’re sitting, they can be rebooked to another flight without a change fee or fare difference.”

I asked Sandra Albrecht, an assistant professor of epidemiology at Columbia’s Mailman School of Public Health and the chief epidemiologist behind “Dear Pandemic,” a scientific communication effort on social media, if she would cancel her flight if someone sat next to her.

“Absolutely not,” she said. “As with everything with Covid-related, the risk spectrum is a sliding scale. You can think of seating as something you’d be able to slide up a notch and down a notch, but there are other things you could slide, like, 10 points up or 10 points down.”

Risk tolerance and health vary, of course, so let’s return to your question about window seats. If the goal is to sit as far from strangers as possible, your hunch is theoretically correct.

“If you’re in the window seat and the aisle seat wasn’t occupied, the nearest passenger would be in the middle section or on the other side of the plane,” said Arnold Barnett, an M.I.T. Sloan School of Management statistics professor who has studied the effects of keeping middle seats open on the likelihood of getting sick. “That’s already a distance of several feet. If everyone’s wearing masks, that’s a good situation.”

Even then, it’s not open-and-shut. Say you have selected the perfect window seat and boom: A shrieking baby sends an annoyed passenger scrambling for calmer pastures — next to your son. Or a seat doesn’t recline, causing its occupant to move. Or the plane is 70 percent full and the math works out that a handful of solo travelers have to sit together.

If you’re someone who can’t tolerate that kind of uncertainty, sit on the aisle in the center section — the aisle will be on one side and an empty middle seat will be on the other.

“The benefit is that you don’t have anyone sitting next to you, so you’re farther away from other people for a consistent period of time,” Dr. Albrecht said. “But you do have a variety of people in the aisle, so you’ll probably have briefer interactions with a lot of different people.”

Luckily, Dr. Barnett said, when someone does brush by (say, on their way to the bathroom), “it’s such a short time that you’re in proximity and you’re wearing masks.”

“We shouldn’t let the seat-assignment question distract us from thinking through how we can stay safe throughout the rest of the travel process,” Dr. Albrecht said.

That means leaving your mask on, eating at home or in the airport, and waiting until the rush has subsided to deplane. It also means keeping some perspective: We’re in a pandemic that has ravaged air travel — on Nov. 1, the number of people passing through T.S.A. checkpoints clocked in at around 38 percent of last year’s figure, according to the agency’s ongoing tally. Even holiday travel is expected to be down; airports may be busy around Thanksgiving, but the numbers are almost certain to be a fraction of what they normally are.

And because your son is flying the week before — a particularly smart move any year, but especially now, when crowds bring safety concerns — he’s likely to end up with lots of elbow room. As I suspected, the seat map confirms: There is still a sea of open window seats.

Sarah Firshein is a Brooklyn-based writer. If you need advice about a best-laid travel plan that went awry, send an email to [email protected].

Postcard-Perfect Scenes, Constructed From Memory and Scraps of Paper