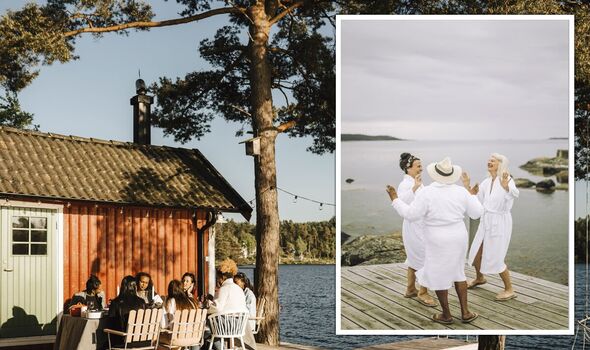 Sweden was named Europe’s healthiest country and has one of the lowest obesity rates on the continent.

According to the research, Swedish people drink less than their European counterparts and are unlikely to smoke.

Swedish residents have to plan ahead if they want a drink as alcohol is only sold in special stores.

Systembolaget shops are Government owned liquor stores and the only shops allowed to sell alcohol over 3.5 percent.

Many of the shops are only open until 7pm and are closed on Sundays, leaving Swedes high and dry if they run out outside of opening hours.

In 2021, only six percent of Swedish people smoked compared to around 13 percent in the UK.

However, snus remains fairly popular in Sweden. A smokeless tobacco product, snus is placed between the upper lip and gum for an extended period of time.

Snus contains about three times the amount of nicotine as a regular cigarette and is banned in the UK and the EU apart from Sweden.

Approximately one million Swedish adults currently use snus which expats might want to avoid for health reasons.

However, Swedes do exercise a lot and around half of the population walk on a regular basis while others take part in winter sports.

During the winter, the capital city Stockholm, has several ice-rinks which are free to use if people bring their own skates.

Moldova was Europe’s third healthiest country and has the second lowest rate of obesity in the continent.

The UK was the 10th healthiest country in Europe and made the list due to a very low smoking rate.

Far fewer people smoke in the UK compared to the rest of Europe but it does have a higher obesity rate.

Many people are also insufficiently active in the UK which could be contributing to the high obesity rate.