Glamping with giants: Pack your trunk to bed down with elephants in amazing bubble tents deep in the jungles of Thailand

Stretched out in a glass bubble tent in the Thai jungle, we were joined by two giant beasts just ten yards away. Their ears flapped as I sat up, feeling a little absurd exposed to the elements in my striped pyjamas by the banks of the River Ruak, with Myanmar (formerly Burma) a few yards across the water.

It felt like an Eden Project for two — with WiFi, a wooden deck and even an electric blanket. What to wear, or not to wear, in bed was the pertinent question, as there was nowhere to preserve one’s modesty in this giant balloon of transparency. 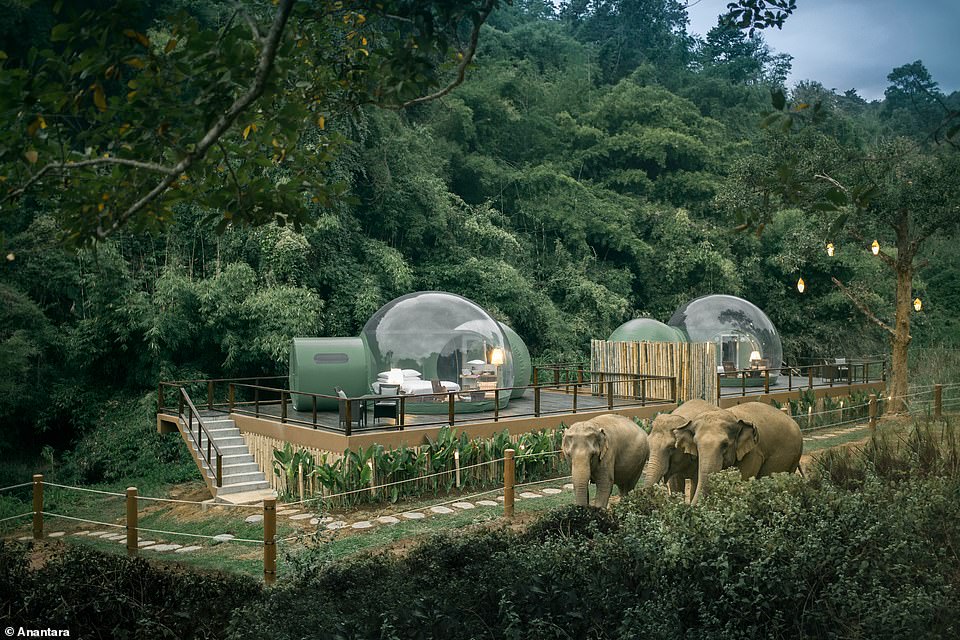 Up close: Phineas Wilson stayed in a glass bubble tent (above) at Anantara Chiang Rai hotel, which lies in the Golden Triangle Elephant Camp 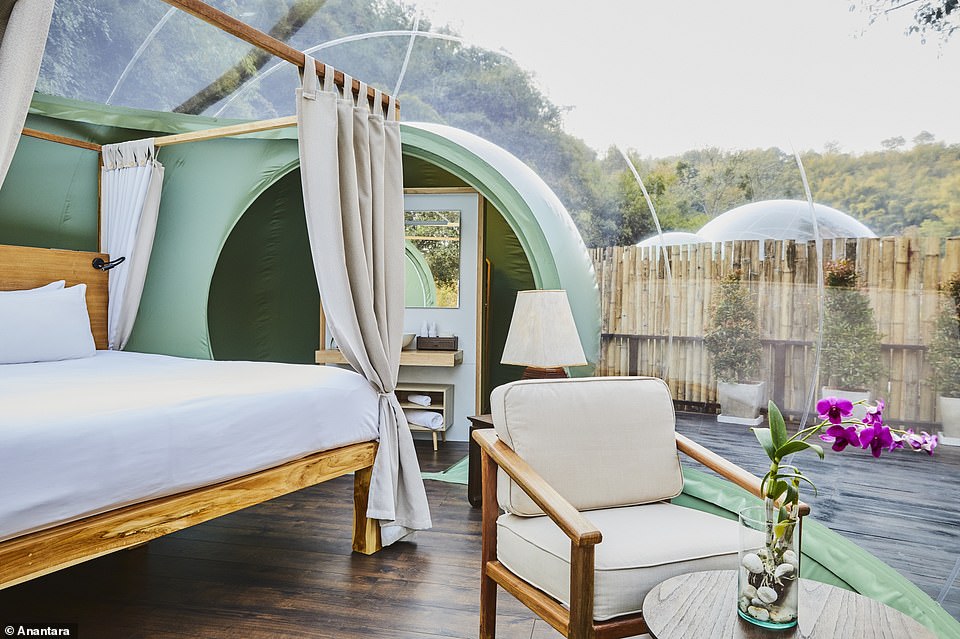 Phineas says that the bubble tents felt ‘like an Eden Project for two — with WiFi, a wooden deck and even an electric blanket’ 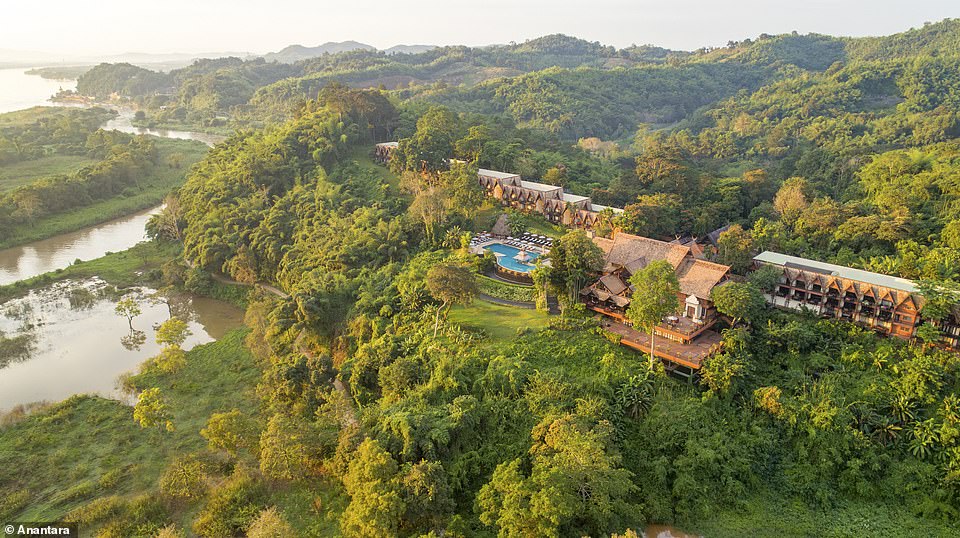 The hotel lies by the banks of the River Ruak, with Myanmar (formerly Burma) a few yards across the water

Dinner was taken by candlelight on the deck. We were served by a uniformed waiter, curries emerging from silver tiffin boxes. We munched and the elephants munched. Fortunately, we were more aware of them than they were of us.

As the sun set, the elephants turned from dark silhouettes to shadowy presences barely illuminated by the stars, the gentle beasts endlessly chomping grass, trunks swooshing the air as they tucked in.

These Asian elephants are reportedly two of only 6,000 left in Thailand, half of them kept in semi-captivity in protected areas. We were up north, in Chiang Rai at the Golden Triangle Elephant Camp, a world away from the powder-white beaches of Phuket or Koh Samui in the south.

‘I was hoping to channel The Jungle Book and guess what? I found my inner Mowgli with the elephants,’ said one guest back from a dawn walk, during which he encountered a couple of two-ton giants. ‘That was closer than I get to my wife.’

A 33-year-old former baker from Edinburgh said: ‘I wanted a holiday with a sense of Indiana Jones crossed with luxury.’ Me, too. My wife was especially keen on the luxury element, and she was not disappointed as Thai hospitality knows no bounds. 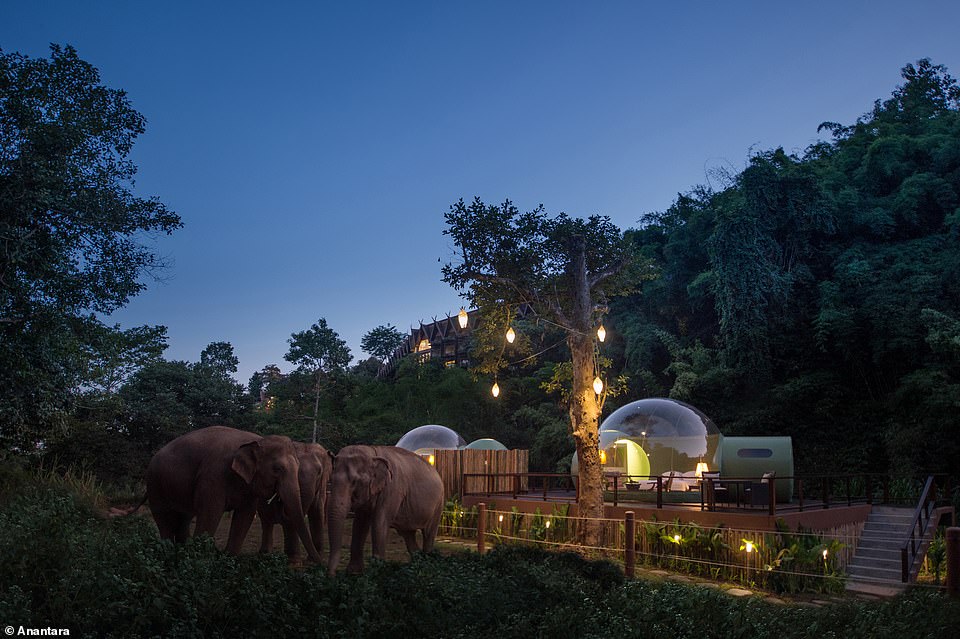 ‘As the sun set, the elephants turned from dark silhouettes to shadowy presences barely illuminated by the stars,’ Phineas reveals 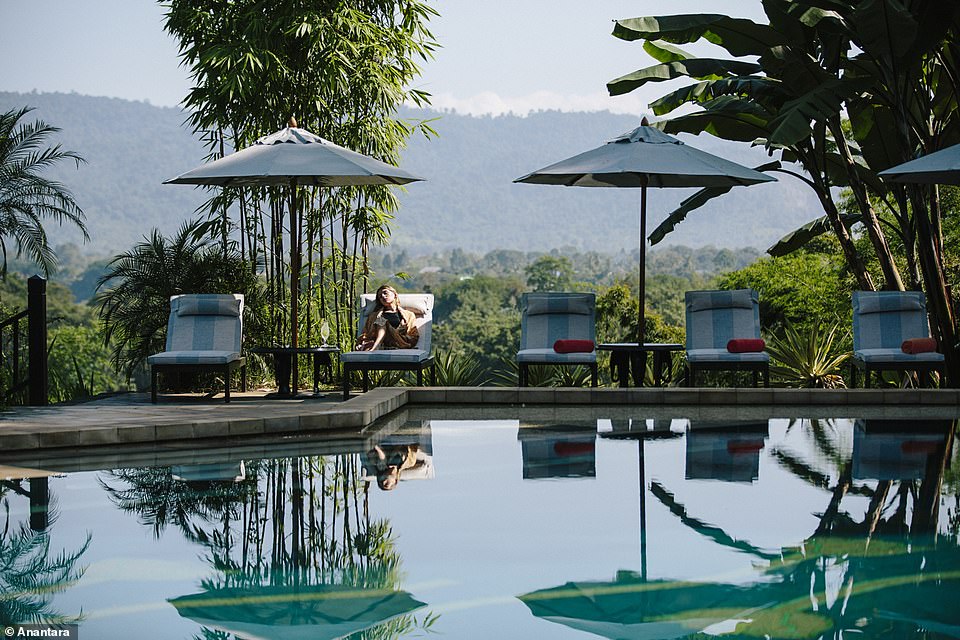 The pool at the Anantara Chiang Rai hotel. One guest told Phineas that they ‘wanted a holiday with a sense of Indiana Jones crossed with luxury’ 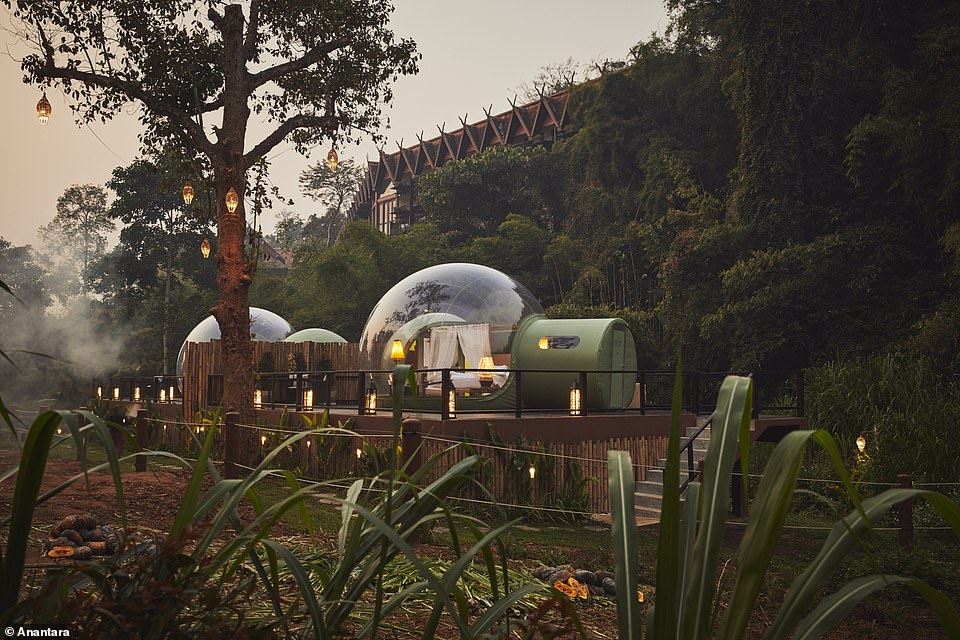 As Phineas enjoyed a candlelit dinner on the deck, he watched the elephants ‘endlessly chomping grass, trunks swooshing the air as they tucked in’

The elephants were not the only excitement at the Anantara Chiang Rai hotel. We also channelled our inner Steve McQueen, as two Royal Enfield motorbikes with sidecars appeared. With sunglasses on and wind in our faces, we sped off to admire the countryside, unchanged for centuries, a patchwork of paddy fields and hills.

Before heading north, we’d spent four nights in Phuket, staying at another Anantara resort, called Mai Khao Phuket Villas. It sits on the beach and is a series of small bungalows linked by paths, with bicycles scattered around for guests to grab.

Giant waterlilies adorn ponds and the walkways between the rooms have leaf imprints. Monitor lizards (think mini crocodiles) stare beseechingly for a piece of bacon at breakfast.

Phuket is roughly 30 by 13 miles, and has 40 beaches connected by one dual carriageway. A hire car is cheap and is the best way to sample those beaches, from the popular ones of Patong, Kamala and Bangtao to the more peaceful options at Naithon and Mai Khao.

The island’s main town is Phuket City, known by everyone as Phuket Town, and Thalang Road is where to go: a mix of Sino-Portuguese mansions, jewellery shops, coffee bars and ubiquitous spas. 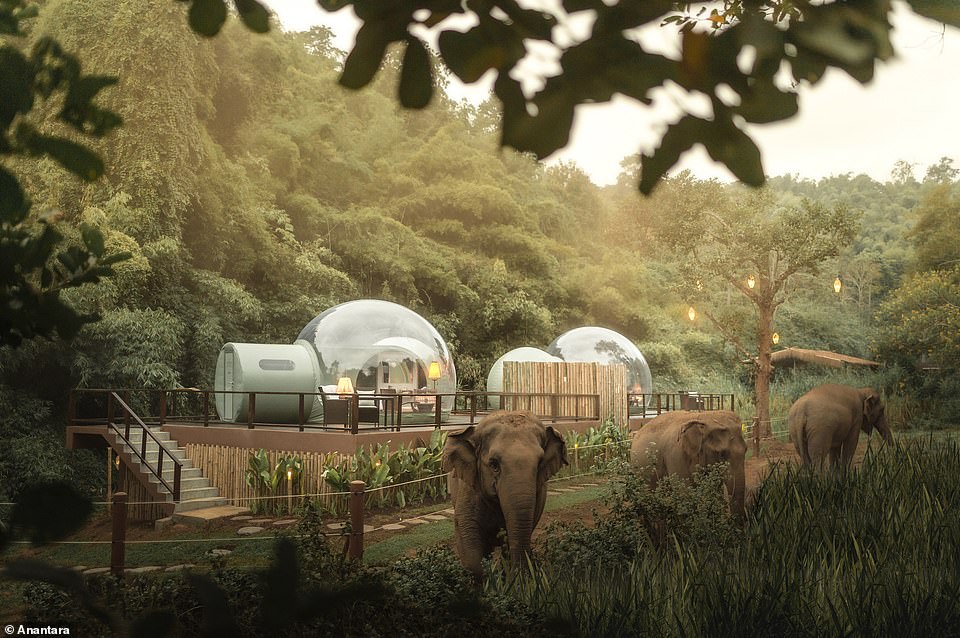 ‘You certainly won’t forget sleeping with elephants in a hurry,’ writes Phineas 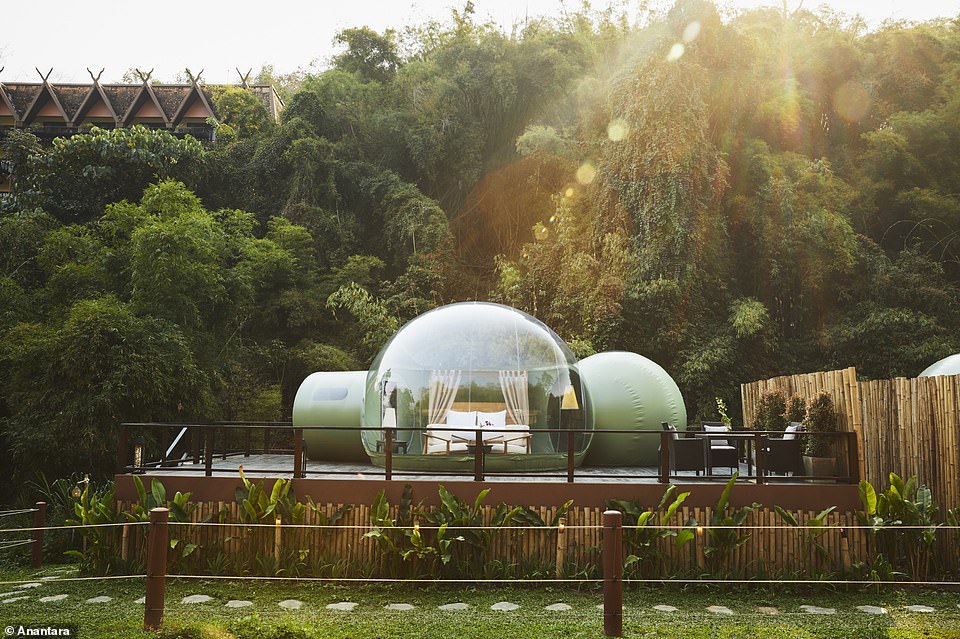 During his stay, Phineas got to test out a motorbike with a sidecar and sped off to admire the surrounding countryside

One morning we parked off the main street. It all felt wonderfully relaxing, until our car was clamped. Thankfully, release was done with faultless efficiency for just £15. A boy on a motorcycle appeared out of nowhere and offered to take us to the police station, where we paid the fine within two minutes. All done with smiles and apologies. The smiles were a recurring theme.

Before heading home, we spent two days in Bangkok, famous for its labyrinthine streets of spas, cafes, and shops. I was unprepared for the ever-expanding, spectacular modernity springing up beside the traditional city centre, with its legendarily vibrant night life.

Like a new Shanghai, hotels and skyscrapers have shot up, such as the Avani+ hotel, where we stayed and marvelled at the views, which almost match those of Hong Kong.

Thailand’s tourism suffered terribly during the pandemic, with restrictions being lifted later than many other holiday hotspots. But it’s good to go now, and you should go.

You certainly won’t forget sleeping with elephants in a hurry.