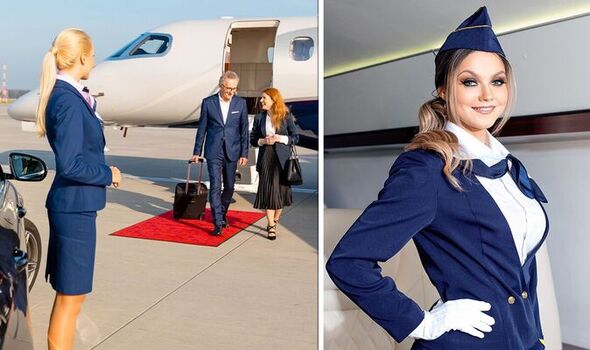 Private flight attendant Arta, who is currently based in Spain, shared “the weirdest situations” and the funniest anecdotes that happened to her on board the jet. The crew member explained that some situations seem “funny now” but “definitely were not at the time”.

Arta recalled the time she had to fly Government officials for a heads of state trip.

She explained: “We went to Africa and we stayed for one night. We all, crew and guests, stayed in the same hotel as it was the best hotel there, and we all ate at the same restaurant.”

The flight attendant said she did not want to eat anything but plain rice as she was afraid to get food poisoning.

“Well, that did not help. The next morning we all had bad stomachs and as we later found out, also all the guests had the bug too,” she explained.

The flight attendant claimed she had to operate the private jet on the way back while the whole crew and passengers were sick.

Arta explained: “It was quite an experience and a funny one now that I remember it.

“One of the pilots was still in the toilet when the guests were boarding, we were two flight attendants on that flight taking turns to go to the toilet at the front of the plane.

“I still remember I was in the galley when my colleague was in the lavatory and the captain came out from the flight deck during the flight knocking on the lavatory door begging her to come out fast otherwise, quoting him ‘I will sh** my pants!’ That was quite hilarious as we all were laughing at each other.”

Another flight attendant, who wished to remain anonymous, shared with Express.co.uk what the life of a private crew member is after work.

She said that when they arrive at the destination and the passengers disembark the jet, the flight attendant has to continue working.

Her responsibilities include restocking the cold and dry storage of the private jet, as well as preparing the aircraft for the next flight.

She explained: “We have to replenish wines and spirits and get prepared for our next flight. However, when our layover happens to be more than one night, we can most likely join our cabin crew for dinner plans.”

The private crew member shared what she enjoys doing when she arrives at the most luxurious and exclusive destinations.

She said: “When we are fortunate to stay in one location for multiple nights, I enjoy exploring on my own, finding a scooter to ride around the town, and discovering new coffee spots,” she said.

The flight attendant shared her routine after landing: “As soon as I get to my hotel I unpack everything and organise my stuff.

“I get ready for the following day, if I have time, I will hit the spa to rejuvenate. I end my evening with an eight-step skincare routine, then I am off to bed.”

She explained that “the worst thing” about being a private flight attendant is that sometimes “I feel very exhausted from flying and cannot always enjoy the travel”.

“It is a very highly demanding career. Most people only see one side. But in fact, over time, the flying does wear you out. The other unfortunate factor is that you are not on your own schedule for two weeks.

“You really can’t just do anything you want. If you don’t have time to go to the gym, you can’t. If you are too tired to go out, you stay in and recover for the next flight. We are always on the go. I do love my job, but sometimes I get homesick,” she admitted.

The best country in the world for British expats is ‘excellent’