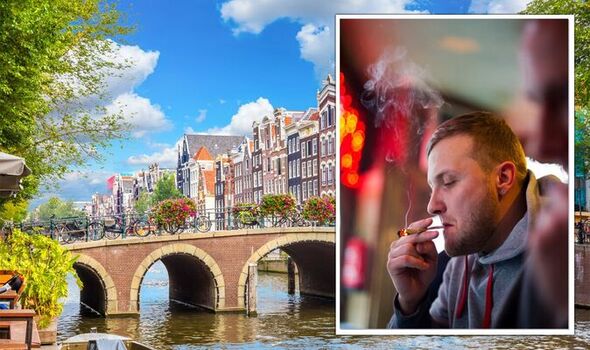 The city is also considering putting limits on stag parties and shutting down brothels. Amsterdam would like to become a cultural destination rather than a party city.

A ‘stay away’ campaign is due to be launched next year which would limit the opening hours of bars and clubs.

Brothels in the red light district would also be subject to limited opening hours including at the famous window establishments.

If the measures are successful, smoking and drinking would also be banned in some areas of the city.

Airbnbs and short-term holiday lets could also face stricter rules and owners could be encouraged to turn them into homes for residents.

Sofyan Mbarki, Amsterdam’s deputy mayor, said: “If we have to love the city, we have to act now.”

Mbarki said that the city had held discussions with experts, interest groups, residents and businesses.

He said: “It has become clear that everyone cares about the city and that intervention is needed to counter the nuisance and overcrowding.

“If we want effective and forward-looking cooperation, both a long-term vision and appropriate measures are needed.

“Amsterdam is a metropolis and that means a lively and bustling city, but to keep our city livable, we now have to opt for limits instead of irresponsible growth.”

All the proposals are due to be put to Amsterdam’s city council on December 21 for discussion.

In October, the council discussed whether to ban tourists altogether from the city’s coffee shops.

Currently, the state turns a blind eye to foreigners smoking cannabis in ‘coffee shops’ around the city.

Cannabis was decriminalised in Amsterdam in the 1970s, and while it’s not entirely legalised, it’s tolerated by the Government.

In coffee shops, customers can buy and consume cannabis and the city is home to around 200 certified shops.

Amsterdam’s Red Light District is world famous for its sex workers that advertise from the brothel windows.

If the new rules pass, the Red Light District would have to operate under reduced hours and some brothels may be forced to move further out of the city centre.

Amsterdam isn’t the only tourist destination aiming to crack down on hedonism and stag parties.

Malaga has brought in new laws that could see stag or hen parties fined for carrying lewd objects or wearing offensive clothing.

Local residents in Barcelona have also called for new laws to limit the number of tourists in the city’s Gothic Quarter.

After Hyatt's ALG acquisition, what comes next in all-inclusives?

Where Can Americans Travel Right Now? A Country-by-country Guide