Home » Sports » With Title in Sight, the Dodgers Are Armed and Ready to Get Creative

ARLINGTON, Texas — It seems to be a dream setup for a modern front office, a chance to write the script for the game that clinches a title. On the mound for the Los Angeles Dodgers in Game 6 of the World Series on Tuesday: Tony Gonsolin, who served as an opener for a band of six relievers — three lefties and three righties — in his start last week.

“I personally have no idea with Gonsolin — I know he’s capable of many pitches, I don’t know exactly if that’s the route they’re going to take,” said Kevin Cash, the manager of the Tampa Bay Rays, on Monday’s off day. “They could get pretty creative, they’ve got a thick bullpen, go right-left-right-left. I don’t want to give them the option to where they could pin us down to making radical changes in the second or the third inning. A lot to consider.”

In some ways, Cash has only his own team to blame. The Rays pioneered the practice of designing a game plan involving multiple pitchers on the days their best starters rested. The Dodgers were the first team in modern times to try it in the World Series.

But Gonsolin lost Game 2, and on Monday, Dodgers Manager Dave Roberts insisted he would work as a regular starter in Game 6, not an opener.

“Tony’s a starting pitcher tomorrow,” Roberts said. “I hope to get five or six innings, that would be great. As much as people want to say there’s a script, the game plays out. I’m going to watch him pitch and then we’ll see what we do after that.”

Every Dodgers pitcher will be available Tuesday, Roberts said, except for his other starters: Clayton Kershaw, who won Games 1 and 5; Walker Buehler, who won Game 3; and Julio Urias, who pitched four and two-thirds strong innings in Game 4. That group has combined for a 2.42 E.R.A. with 33 strikeouts and five walks in 22⅓ innings, but none of the pitchers has faced more than 21 batters.

After Game 5 on Sunday, when the crowd at Globe Life Field booed Roberts for taking out Kershaw in the sixth inning with two outs, nobody on base and a two-run lead, the manager explained that most starters, including Kershaw, wear down somewhere between the 21st and 24th batter they face.

It’s a safe bet that Walter Alston or Tommy Lasorda — the Hall of Famers who managed the Dodgers to their six titles — did not think that way. But the Dodgers believe it is better to use relievers as peacekeepers instead of firefighters, and it was hard to argue with the results on Sunday.

As fun as it might have been to see more from a future Hall of Famer like Kershaw, Roberts trusted Dustin May to do just what he did: fling 101-mile-an-hour fastballs and keep the Rays quiet as part of a string of Dodger relievers.

Gonsolin, like May, reached the majors in 2019 and has made 14 career starts and a handful of relief outings, with fewer than 100 innings over all.

As for Gonsolin, he said he would be more comfortable knowing he could pitch deeper than he did in Game 2, when he faced just six batters, allowing a home run and a walk and taking the loss. Gonsolin, a 26-year-old right-hander, offered few other insights.

“Try not to put any more pressure on myself than there already is,” he said. “I try to go out there and throw the ball to the best of my ability. Nothing changes tomorrow.” 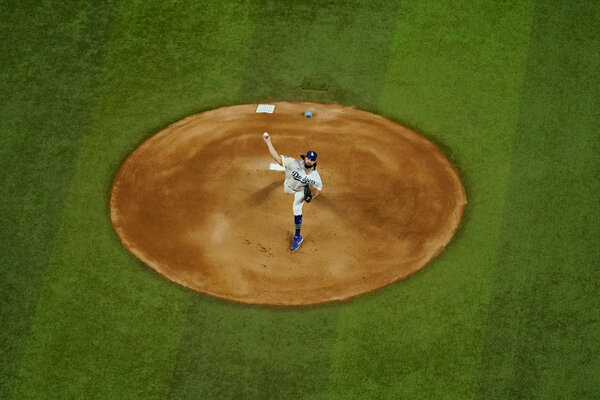 At the same time, everything could change: With a victory, the Dodgers would finally escape the shadow of 1988, when they last won it all. This is their third World Series since then and 14th postseason appearance, including 10 with Kershaw, 32, who sounded eager to wrap the series up after winning Game 5.

“The off-day’s going to be hard tomorrow, I think,” he said. “I mean, it’s going to be good for us resetting our bullpen, which is huge. But sitting around one win from a World Series is going to be hard, especially when you’ve been in the same hotel for four weeks now. But I think we can wait one more day. We’ll all be ready for Game 6.”

The Dodgers have been disciplined in their use of Kershaw, who worked on short rest or in relief at some point in all nine of his previous postseasons. He has responded with his best October ever — 4-1 with a 2.93 E.R.A. in five starts — and Buehler is already a reliable postseason standout at age 26.

Buehler has never, in any of his four major league seasons, pitched on short rest. Asking him to do so with a 3-2 series lead — as the 2003 Florida Marlins did with Josh Beckett, who fired a clinching shutout in Game 6 at Yankee Stadium — was never an option.

“After winning a game, you put him in a tougher situation,” Roberts said, dismissing the idea. “There’s already guaranteed, at worst, Game 7. It just doesn’t make sense for Walker. He hasn’t done it, there’s a blister component that we’ve dealt with; it just brings that more into play without the extra day. So we thought it through.”

The Dodgers think everything through, of course, sometimes to the point of extremes. To watch them in October is to wonder how much freedom Roberts really has to go off script and react to what he sees.

This much, at least, is certain. With one more victory, Roberts and the front office will have an easy retort to anyone who doubts them: a championship ring, at last.

Motor racing: Abt had to go because he consciously broke rules, says Audi