Home » Sports » The N.B.A.’s Roving Role Player Hopes to Settle Down in Brooklyn

Jeff Green has not played basketball everywhere, but it’s on his list. The Nets are the 10th N.B.A. team he’s played for since he was drafted in 2007, two shy of the record shared by Chucky Brown, Jim Jackson, Tony Massenburg and Joe Smith.

Green, 34, is one of 18 players in N.B.A. history to play for at least 10 teams. He is now in the playoffs as a core member of the Nets — one of his seven postseason teams.

During the regular season, he played some of the best basketball of his career, posting a career high in offensive efficiency, while starting for more than half the season filling in for the All-Stars Kevin Durant, James Harden and Kyrie Irving. On one of the most loaded teams in N.B.A. history, Green has carved out a niche for himself, averaging 11 points and 3.9 rebounds per game, with the occasional highlight-reel dunk.

Because of a plantar fascia strain in his left foot, Green missed six straight playoff games before returning on Sunday for Game 4 of the Nets’ second-round series against Milwaukee, a Nets loss that left the best-of-seven series tied at two games apiece. Now, the Nets find themselves in an unexpected dogfight against the Bucks. And with Irving having sprained his ankle and Harden’s hamstring ailing, Green will be called upon once again to play a significant role.

But Green’s career has been an especially odd trek, even in a league where players are moving around more than ever. Green has been productive but has not cashed in with long-term deals: He has joined seven of his 10 teams since the 2014-15 season. His last five contracts — with the Nets, Houston Rockets, Utah Jazz, Washington Wizards and Cleveland Cavaliers — were for one year or less, at the minimum rate. One of those was a 10-day contract with the Rockets.

Green has routinely averaged around double digits in scoring and outperformed the expectations for someone with his pay. In Game 7 of the 2018 Eastern Conference finals, he had 19 points and 8 rebounds for Cleveland against the Boston Celtics, helping the Cavaliers advance to the championship round.

But instead of landing him a substantial contract, that performance, after a strong regular season, only led to another minimum contract — the kind of status often reserved for players who are on the fringe of the N.B.A. or at the end of their careers.

“It confuses me, but it isn’t frustrating,” Green said in a recent interview. “You know, this stuff, that’s out of my control. I go out and just do the work. And I let my agent handle the logistics of the contract terms, but it is confusing to the point of, ‘What else do I need to do to prove that I’m not a minimum guy?’”

Green said that he would like to stay with the Nets past this year. 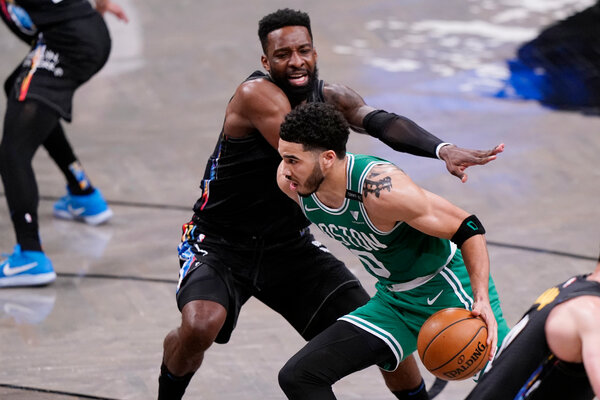 Green’s lack of multiyear offers hasn’t gone unnoticed. After he agreed to yet another minimum deal, with the Jazz in 2019, Dwyane Wade said in a viral Twitter post: “I do NOT understand how and why Jeff Green keep signing these 1 year deals for the minimum. This is now 3 years in a row. He’s never injured, He’s never been a problem in the locker room, He’s athletic, he can shoot the 3, he can guard multiple positions and he’s not old.”

DeAndre Jordan, Green’s friend and Nets teammate, called it “a little unfair,” but added, “Obviously, teams want him because he continues to get signed.”

So instead, Green has settled for life as a professional basketball nomad.

Green, a native of Cheverly, Md., began his N.B.A. journey in 2007 after three years at Georgetown. He was drafted fifth overall by the Boston Celtics and immediately traded to the Seattle SuperSonics in a package for Ray Allen. The Sonics had already drafted Durant at No. 2 overall. Because of Green’s athleticism and scoring ability, there was hope that Green would become a star next to Durant.

That never materialized. At his best, Green has showed a talent for scoring, but not much else — which helps explain why he hasn’t been able to settle with one franchise. And while in some cases an N.B.A. player might bounce around because of concerns about locker room presence, Green has a positive reputation off the court.

Kevin Ollie, a teammate of Green’s in Oklahoma City after the Seattle franchise moved, said Green’s personality was “bubbly,” but “detail-oriented” on the floor. “You see the hard work, but then you see love behind the hard work,” he said.

Ollie knows what it’s like to move around: He played for 11 teams, one more than Green. He is one of around 200 teammates that Green has played with in his N.B.A. career. Ollie said one of the challenges of playing for so many teams was constantly having to uproot his family, particularly his children. Green said his wife, Stephanie, “makes it very easy.”

Ish Smith, now a guard for the Washington Wizards, his 11th team, said playing for so many franchises means locations that should be familiar are not: the grocery store, the arena, the practice gym.

“The difficult part is when you leave one team and go to another team, you’ve got to pick up all your stuff,” Smith said. “All your belongings. Get traded to a new team and get acclimated to a new system and a new area. New everything. And then that’s just the off-the-court stuff. The on-the-court stuff is, playing-wise, knowing what each team wants from you.”

Asked if he was going to get the record for most teams played for, Smith said, “For sure.”

One of the players that Smith would have to overtake is Jackson, who played for 12 teams from 1992 to 2006. Jackson said he was able to more easily adapt to that many franchises because he could play multiple positions.

“Each person’s journey is a lot different,” said Jackson, who is now an analyst for Turner Sports. “With Jeff, and kind of like mine, you perform a role which the organization asks you to, and you perform it to the best of your ability. After that, there’s nothing you can do. If they choose to go in a different direction, whether contract-wise, they’ve got a younger player that comes in, or they can move you for an asset, it’s really out of your control.”

That Green is even still in the league is surprising. In January 2012, when he was 25 and playing for the Celtics, he had surgery for an aortic aneurysm that was discovered in a routine physical. The heart surgery likely saved his life. He missed the 2011-12 season.

A decade later, Green said he never doubted that he would play again.

“I reflect on it by being grateful and blessed to wake up and still be able to play. That’s my reflection,” Green said. “My goal after the surgery was to go out and play as hard, and have people forget that I even had surgery. And I think that was the goal and I think I succeeded.”

Instead, Green talks about playing into his mid-40s, like his former teammate Vince Carter, who played for eight teams. But either way, Green said he is satisfied with his career plight.

“You can’t take this career, these opportunities for granted,” Green said. “Regardless of how many teams that I’ve been on, the end of the day, my goal was to play in the N.B.A. and I’m still doing that.”

With fans and flowery hats, Kentucky Derby is back at old home in May – The Denver Post

Must-visit dinosaur museums, hikes and more in Colorado — The Know