Every winter, the cliffs along Nazaré, a Portuguese fishing port north of Lisbon, become a grandstand for spectators watching daredevil surfers drop into the tallest waves on earth.

On February 11, they witnessed yet another world record wave, this one ridden by the 33-year-old Brazilian Maya Gabeira, a surfer who almost lost her life to the same wave.

Gabeira and her tow-partner, Sebastian Steudtner of Germany, were in the lineup in Portugal to compete in the men’s team event at the Nazaré Tow Surfing Challenge. Gabeira, the only woman surfing in the men’s field, was in perfect position when the biggest set of the day rolled in.

“I was in the zone,” Gabeira said this month from her home in Nazaré. “More brave than I am usually. I got really close to disaster.”

Gabeira gripped the tow rope as Steudtner gunned their jet ski to 50 miles per hour, slinging her onto the lip of a cresting giant.

She flew down the face of the wave as it curled overhead then crashed in a series of what felt like explosions, Gabeira said, before engulfing her body in white water.

“I had never been so close to such a powerful explosion,” she said. “I had never felt that energy and that noise. It felt really terrifying.” 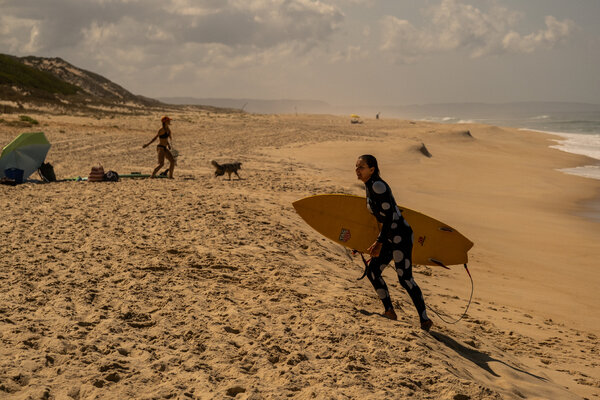 This month, a team of private wave engineers and scientists with the Scripps Institution of Oceanography and the University of Southern California Department of Aerospace and Mechanical Engineering determined the wave Gabeira rode that day was 73.5 feet tall, smashing her own previous record by more than five feet.

“I think it’s really important for the next generation of girls growing up to see women accomplishing these things,” said Paige Alms, 32, one of the world’s best big wave surfers. “You can only really dream as big as what you can see.”

Gabeira’s run beat out the 70-foot wave surfed by the Nazaré Tow Challenge champion Kai Lenny, also on February 11. It was a Danica Patrick moment for big wave surfing.

Not everyone was ready to crown Gabeira, though. Hours after Gabeira caught her record-breaking wave, Justine Dupont, a 29-year-old from Southwest France — widely considered one of the top three women in big wave surfing, alongside Gabeira and Alms — caught a wave that some believed to be every bit as big as Gabeira’s. Her wave, which was determined to be approximately 70 feet, earned her the women’s crown at Nazaré and Ride of the Year from the World Surf League.

“It’s an imperfect science,” the big wave surfer Greg Long said, “and when we’re talking world records it’s imperative that you bring in a more scientific and specific means.”

Michal Pieszka, a surf scientist at Kelly Slater’s wave pool, led the study in collaboration with researchers. They examined the tides, light and shadows, which can affect perception and size in a photograph, and the objects in each picture. They analyzed both camera angles and the camera lenses involved in capturing Gabeira’s and Dupont’s waves.

Dupont remains unconvinced of their conclusion.

Nevertheless, the World Surf League and Guinness certified Gabeira’s record, fueling what is becoming the greatest rivalry in the history of women’s big wave surfing.

Garrett McNamara, a big wave legend, first heard of the waves of Nazaré when he was contacted in 2005 by a Portuguese bodyboarder named Dino Casimiro, the son of a Nazaré fisherman who wanted to raise the profile of his tiny Portuguese town. They emailed back and fort but McNamara didn’t plan a trip until his wife found an invitation from Casimiro, which he’d sent in 2009, floating in their archives.

At the time, McNamara was searching for the elusive 100-foot wave, something none of the known surfbreaks at the time could ever deliver. When he arrived at Nazaré’s cliffside lighthouse in 2010 and stared out at the biggest wave he’d ever seen, his holy-grail dream had become a possibility.

For tow-in surfers like Gabeira and Duponthat pursue such gargantuan waves, there is a crucial teamwork element. Tow surfers need a skilled driver on the jet ski, armed with a radio to communicate with a cliffside spotter to help determine where and when the next monster might rise, and where they need to be to catch it. In tow contests, the jet ski driver splits the purse with a winning surfer.

In 2011, McNamara surfed a 78-foot wave at Nazaré and set a world record. His peers in the big wave community were dismissive. It lacked the classic shape of some notable big waves, like Jaws in Maui, they said, and most assumed it lacked the power, too.

Gabeira and Steudtner were among the first to follow McNamara to Nazaré, though they soon experienced the slim margin for error. In 2013, Gabeira wiped out on a 50-foot wave and was held underwater for several minutes. She was barely conscious when she grabbed a dangling tow rope, only to be dragged toward shore facedown, getting pulled from the water without a pulse. CPR saved her life, but she had snapped her right fibula and herniated a disc in her lower back.

Her recovery took four years and three back surgeries. She lost all her sponsors, dealt with an anxiety disorder and panic attacks, and was scolded publicly and warned privately by legends of her sport, including Laird Hamilton, who publicly criticized her after her 2013 accident.

In 2015, Gabeira moved to Nazaré full time, and by 2018 she had set a world record for women after riding a 68-foot wave at the same break. A friendly rivalry with Dupont would soon follow.

“When we are in the water,” Dupont said, “I don’t feel like I’m competing against her. I’m not even competing. I just pushing my own limits. I want to surf bigger waves, to set the middle line. I want to learn about myself, about my emotion. I’m way more passionate about this than about winning or about getting the biggest wave or not.”

Big wave surfing has never been about the money for the elite surfers around the world who chase the biggest swells. Most are young men who leverage a blend of sponsorships, frugality and frequent flier miles to chase waves from California to Mexico, Hawaii and Tahiti, from Indonesia to South Africa and Australia.

“The best professionals, through the years, have been able to make a lifestyle, not a living,” Long said. “They do it because they are the best in the world and because they love it.”

Women have long faced doubt, dismissal and outright denial that they belong in the lineup among big wave chargers. They have seldom had access to the kind of sponsorship it takes to chase swells. After McNamara’s world record, he was sponsored by Mercedes-Benz. It remains to be seen if that will happen for Gabeira.

“Of the top ten big wave women in the world, there’s three getting paid,” said Alms. “The top ten male big wave surfers own homes, travel year around and bring their families with them.”

It can be lonely for women in any surf lineup, but especially on the biggest days at the biggest surf breaks. Dupont and Gabeira have proven that women not only belong in the lineup, but that they are capable of surfing with the best of the best.

“I’m just happy that a woman surfed the biggest wave of the year,” Gabeira said, “It’s possible. Other women can do it.”

“I like to make something that seems so impossible to be possible,” she continued. “Because then it’s so much easier for the next one.”

#STayHome Workout: Sweat it out, all together now

When is the Super Bowl?