Known primarily as an uneven bars specialist, Lee turned in a grace-under-pressure performance for the ages during Tuesday’s team final. 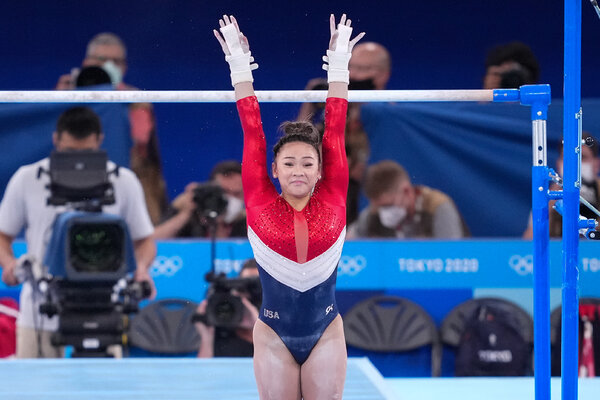 With Russia’s women’s gymnastics team leading by more than a point and Simone Biles abruptly out of the competition in Tuesday’s team final, it fell to Sunisa Lee, anchoring the United States on the uneven bars, to keep the Americans’ gold medal hopes alive.

It was, Lee said afterward, “the most pressure I’ve ever felt in my life.”

The U.S. team, reeling from Biles’s withdrawal, already had two good routines in the bag, from Grace McCallum and Jordan Chiles, the latter of whom had not been scheduled to compete on bars at all and had to step in with minutes’ notice. But neither McCallum nor Chiles is a bars specialist, and their scores could not stand up to the huge numbers the Russian team was capable of. (Three Russians placed in the top six on bars in the qualifying round.) Lee’s numbers could, and if the United States was to stay at all competitive for the gold medal, she had to come through.

Lee, 18, scored 15.2 on bars in qualifying, second only to Nina Derwael of Belgium, who scored 15.366. And on Tuesday, with far more riding on her performance, she outdid herself and Derwael.

Unlike in the qualifying round, when Lee performed a slightly less difficult backup routine after missing a connection between a transition from the high bar to the low bar and a transition back up to the high bar, she nailed her full-difficulty set. It had a difficulty value of 6.8, the highest in the world.

She was slightly off center on that first transition — a deviation barely perceptible to the untrained eye but one that could reasonably have led her to switch to the backup routine if the stakes hadn’t been so high. Instead, Lee powered through the connection, securing two extra tenths of a point for the United States. She finished her giant full, a 360-degree swing around the bar followed by a 360-degree pirouette on her hands, in an almost perfect handstand position, and stuck her full-twisting double back dismount.

Her 15.4 was the highest mark anyone has received on bars at the Tokyo Olympics so far.

Lee went on to hit her balance beam routine, as did Chiles, who had not been scheduled to compete on that apparatus, either, and McCallum. The U.S. team pulled within eight-tenths of a point of Russia.

Three strong floor routines from the Russian team were too much for the Americans to overcome, and would have been so even had Chiles not fallen on her third tumbling pass. But in the last routine of the night, after performances from Vladislava Urazova and Viktoria Listunova had guaranteed Russia’s victory, Lee took Biles’s place on floor — having not warmed up any tumbling whatsoever before the 30-second period allotted immediately before the rotation — and gave her team the gift of knowing, gold or no, that its Olympics had ended on a high note.

Lawn bowls: Getting the sport rolling for young people

Hockey Legend Wayne Gretzky Shared His Father With a Nation